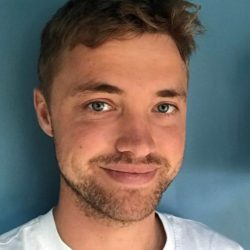 New research by EIA has shown that the volume of trade of some of the most widely trafficked wildlife commodities – raw ivory, pangolin scales, rhino horn and tigers – is now resurging after being temporarily supressed by the coronavirus pandemic.

It’s rare that statistics about the pandemic’s strangled industries bring us hope, but then most industries aren’t the illegal wildlife trade. In 2020, an 89.6 per cent drop in trade would have been deeply concerning, apart from the fact that it was related to raw ivory. A 77 per cent decline in the flow of goods would have been alarming, if those goods hadn’t been the scales of the persecuted pangolin. And a 75 per cent fall in commercial activity would have been unsettling, if this wasn’t linked to the trade in the horn of the endangered rhino. 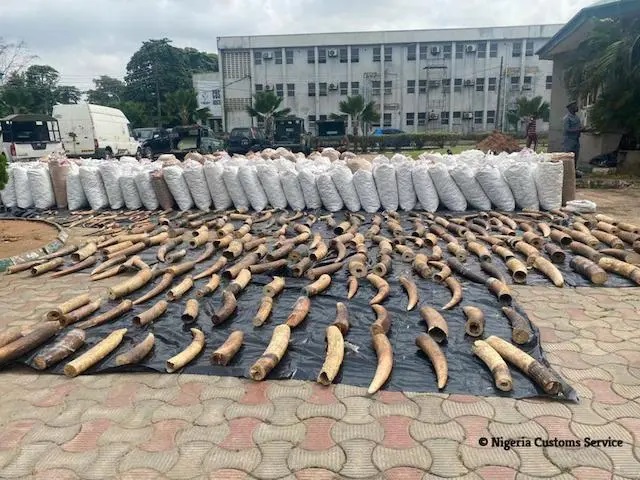 But today, any setbacks which COVID-19 imposed on the illegal wildlife trade are being undone, with traders doing what we dreaded they’d do and pivoting to the new normal. As the world opens up yet further in 2022, the trade in wildlife commodities looks set to rebound with cruel ferocity, putting the world’s endangered species right back in the crosshairs of extinction.

As an organisation with a mission to combat transnational wildlife crime, EIA keeps a close track on the reporting of seizures of wildlife products relating to endangered species. Although not a perfect science due to reporting bias and seizures representing only a fraction of the overall trade, spotting trends in this data provides a useful indicator of how the criminal trade is changing over time.

To mark the second anniversary of the day the World Health Organisation declared a global pandemic, EIA turned to its data to provide a status update on how the levels of illicit trade have changed in the period. The results, unfortunately, are alarming.

Analysis of the data shows that across four species monitored by EIA – elephants, pangolins, rhinos and tigers – the volume of goods seized worldwide fell sharply in 2020 to a fraction of 2019 levels.

In the first year of the pandemic, as our leaders told us to stay at home, the volumes of raw ivory bought and sold fell by 89.6 per cent, pangolin scales by 77 per cent, rhino horn by 75 per cent and whole tigers by 59 per cent. 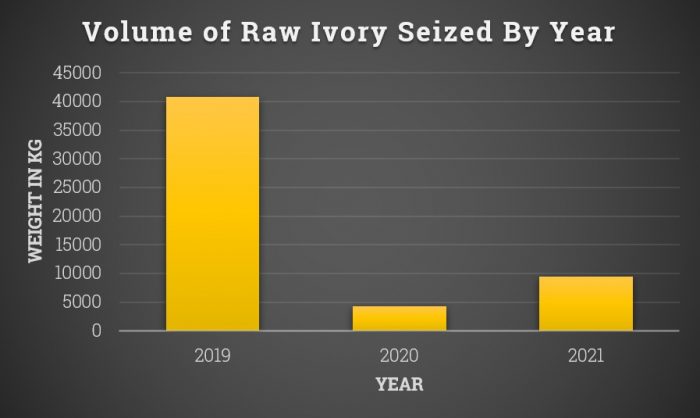 Why were these falls so dramatic? Well, although there are nuances around the different species, the primary factor seems to be clear – the strict lockdown measures imposed by countries around the globe.

These measures prevented both habitually itinerant traffickers and the illicit wildlife commodities they covet from moving locally and internationally. Most importantly, the largest buyers of ivory, pangolin scales and rhino horn in Africa – Vietnamese and Chinese traders – were stuck at home in Asia, tightly locked down by fearful governments (see EIA’s 2020 blog While you’ve been in lockdown so have wildlife criminal and many of them have been working from home).

Trust in this already trust-less industry thinned even further. Wary buyers weren’t willing to part with their money without strong proof and insisted on seeing the goods in person. Ultimately, of course, border closures and travel bans made this impossible. 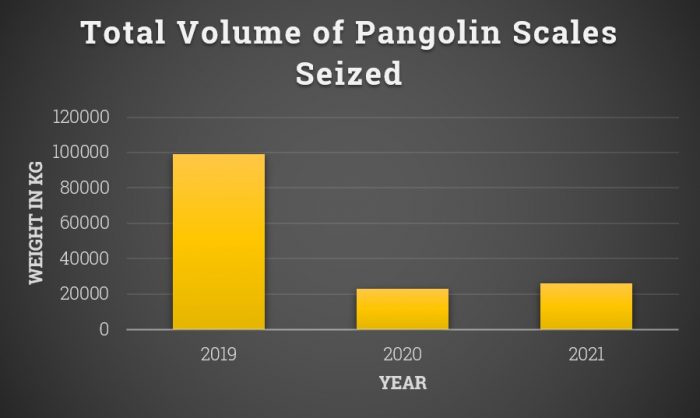 At this point, you might be tempted to think that the pandemic, by way of a silver lining, might have delivered a knock-out blow to the illegal wildlife trade, that cashless traffickers put out of business by circumstance might have decided to put their commercial talents to use elsewhere. The reality of the data proves otherwise. 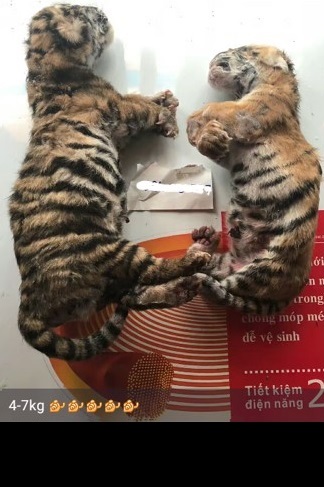 Dead tiger cubs for sale via social media in Laos

Analysis of EIA’s seizure data shows that for all four species, the volume of goods seized started to increase again in 2021, when compared to 2020 levels.

Three large-scale seizures in Nigeria in 2021 – leading to a combined haul of 19 tonnes of ivory and pangolin scales – are prime examples of how the trade is swinging back into life.

The consecutive seizures in Nghe An Province of Vietnam in August 2021 of seven live tiger cubs coming from Laos and the seizure of 17 tigers from backyards and basements indicates the continued trafficking and trade in farmed tigers.

And a seizure of 50 rhino horn parts in Malaysia in September 2021 indicates the scale of the threat rhinos continue to face. 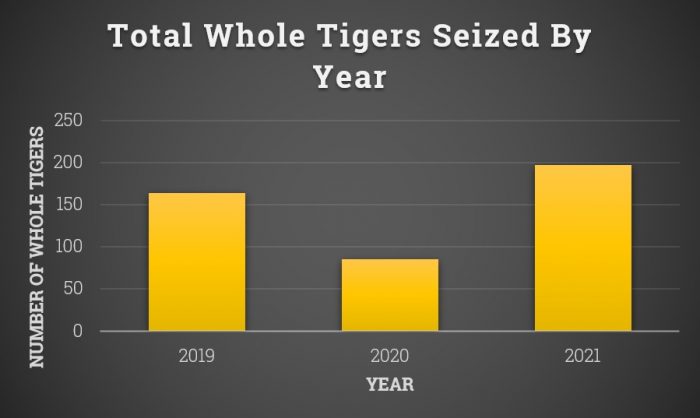 The main factor behind this recovery in trade is thought to be the reverse of what caused the fall in 2020 – countries gradually began to unlock and loosen travel restrictions, allowing a return to freedom of movement of people and goods.

Although the data shows only a 13 per cent increase in the volume of pangolin scales seized from 2020 into 2021, reports of huge seizures in the key transit hubs of Nigeria and Vietnam provide firm evidence that the trade is ramping up once again. Between January and September 2021, Nigeria authorities seized a total of 13.5 tonnes of pangolin scales in three large-scale seizures in Lagos destined for Asia. And in January 2022, more than six tonnes of scales were seized by authorities in Da Nang, Vietnam. Their origin? Nigeria once again. 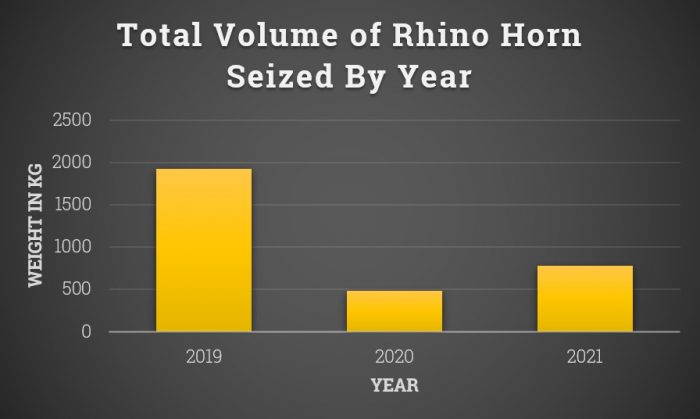 The clear correlation between restrictions on movement and the proliferation of the illegal wildlife trade should worry us all.

Last year saw only saw a partial global unlocking yet led to a strong rebound in the illegal trade of wildlife commodities. If the first few months of 2022 are anything to go by, the world will fully unlock fast and international travel will quickly return.

The massive Da Nang pangolin scale and ivory seizure in the first month of the year is just an opening salvo. Tigers also continue to be slaughtered in 2022, as evidenced in January by a poaching surge in Thailand which saw two animals killed and by a seizure in Vietnam’s Thai Nguyen province of tiger skins, carcasses and bones from a bone glue maker.

Now is the time for law enforcement authorities and governments to be more vigilant than ever. If not, it is the elephants and their ivory, tigers and their parts, pangolins and their scales and rhinos and their horns which will face the gruesome consequences. 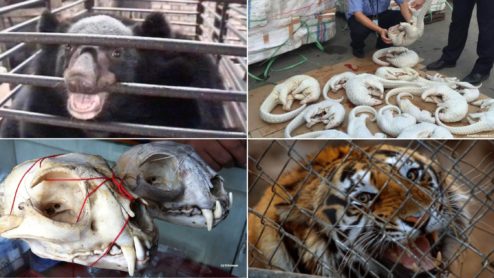 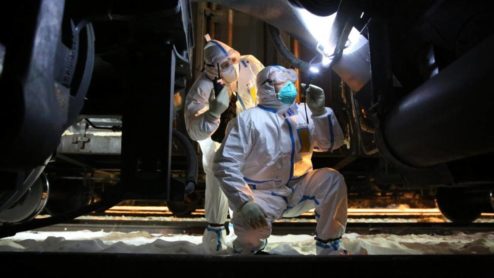