Write to your elected representative, and ask them to urge your Prime Minister or President to call upon President Xi to phase out tiger farms and end all trade the parts and products of tigers and other big cats, from both wild and captive sources.

A permit and a tiger skin rug in Xiafeng taxidermy with, inset, permit details (c) EIAimage

China is the original ‘tiger farming’ country. The first ‘tiger farm’ was established in North-east China in 1986, 13 years after international commercial trade in tigers and tiger parts was banned. This was a Government-funded operation to breed tigers for profit, primarily to supply bones for use in traditional medicine.

In the face of international pressure, China banned domestic trade in tiger bone and rhino horn in 1993 via an order from the State Council, the highest body in government. However, China continued to allow domestic trade in tiger skins, and the number of tigers kept in captivity across the country – from large-scale, commercial ‘farms’ to small ‘zoos’ and informal backyard operations – has ballooned to around 6,000 tigers. The ‘tiger farming’ model has also been exported to Laos, Thailand and Vietnam.

In 2018, the State Council repealed the 1993 ban, replacing it with a new order which specifically allows the use of bones from farmed tigers and horns from farmed rhinos in clinical treatment and medical research. After a domestic and international backlash, Government spokespersons stated that implementation of this new order would be delayed, but it has not been reversed, and the State Council website continues to list the 2018 order as valid policy.

As the primary market for tiger and many other endangered wildlife products, China’s laws and policies have a huge impact on the world’s biodiversity. Fewer than 4,000 wild tigers survive worldwide today, and poaching of wild tigers for trade shows no signs of abating. Given this precarious situation, it is crucial that all range states and consumer countries have robust legislation to outlaw all trade in tiger parts and products and impose deterrent sentences on those engaging in tiger trade. A legal trade in tiger parts and products maintains and stimulates demand, complicates law enforcement and undermines efforts to reduce demand for tiger products.

China’s legal trade in tiger skins was documented by us in 2013 (read our report Hidden in Plain Sight). Just like the permit system previously used for legal trade in ivory – which was banned in China in 2017 – this system is seriously flawed and gives traders opportunities to ‘launder’ illegally-acquired tiger parts. We also uncovered industrial level production of tiger bone wine, which traders claimed was sanctioned by a ‘secret’ government document.

We have been campaigning for many years for amendments to Chinese laws and regulations to prohibit all trade in tiger parts and products. A major overhaul of China’s wildlife protection legislation in 2016 was a missed opportunity to conclusively end the tiger trade. President Xi Jinping has shown conservation leadership by banning China’s ivory trade. But he has yet to do the same to save the tiger.

China’s current Wildlife Protection Law leaves the door wide open for legal, commercial trade in the parts of products of any wildlife species, even those subject to the highest levels of protection. Meanwhile, the continuing ambiguity and effective endorsement of tiger trade from the Government is serving to maintain and stimulate demand, while preventing any much-needed progress to phase out tiger farms and destroy stockpiles, instead sending a message to tiger farmers and the pharmaceutical industry that trade could be opened up at any time.

Action is urgently needed from China’s leadership to declare zero tolerance for all trade in tiger parts and products, from any source.

Commercial trade and utilisation of endangered species is permitted and formalised

The Wildlife Protection Law formalises a permitting system under which protected wildlife may be traded commercially and consumed. Loopholes allow for trade in the parts and products off any species for “scientific research, captive breeding, public exhibition or performances, heritage conservation or other special purposes”. In practice, the ‘heritage conservation’ loophole is being interpreted to allow large-scale commercial trade in leopard bone – and potentially other species – for production of medicinal products.

The law further sanctions commercial trade in the parts and products of captive-bred specimens of protected species, without the requirement for any ‘special purposes’. Trading permits may be issued for products made from captive-bred specimens of protected species, if that species is included on separate ‘utilisation lists’. The first versions of these lists were published in 2017, and while tigers, bears and pangolins were not included, additional species may be added at any time.

The WPL enshrines a captive breeding permit system that allows commercial breeding of protected wildlife, including tigers. This system has underpinned the explosion of tiger ‘farms’ in China, which represent a major threat to the survival of wild tigers.

The WPL states that captive populations of endangered species included on ‘utilisation lists’ are subject to different protection measures. This could seriously undermine enforcement and present opportunities for the laundering of wild-caught specimens. In addition, supporting regulations on the valuation of wildlife state that the official value of captive-bred specimens is half that of their wild counterparts. In China, the severity of a crime involving illegal trade (and therefore the corresponding sentence) is often determined in part using the value of the seized product. This provision could potentially lead to more lenient sentencing for crimes involving captive-bred tigers and other big cats, and so indicates that the Chinese Government has not recognised the severity of trade in captive-bred tigers and its impact on wild tigers.

Trade in protected species is permitted for the purposes of ‘performance’

The permit systems enshrined in the law allow the sale and use of protected species for “public exhibition or performance”. Wildlife performances, such as the use of tigers in circuses as frequently documented in China, serve no educational or conservation purpose, and are often linked with both trade in wildlife parts and products and welfare issues and animal abuse.

Possession of illegally-sourced wildlife and wildlife products is not criminalised

The law does not specifically prohibit the possession of illegally-sourced wildlife and wildlife products, which limits opportunities for enforcement to combat illegal wildlife trade.

Draft regulations around the management and disposal of seized wildlife state that seized wildlife and wildlife products may be auctioned. This could create a way to legalise illegally acquired specimens such as tiger skins for auction, which may encourage illegal activity.

The WPL assigns most responsibility for its implementation to provincial-level government departments, including responsibility for issuing trading permits and production quotas, but does not establish mechanisms for central planning, supervision or accountability. This increases the opportunities for a poorly-regulated legal trade in tigers and other species threatened by trade, and impedes China’s ability to report on obligations under CITES.

We have produced an analysis briefing of the current law.

We have prepared an informal translation of China’s Wildlife Protection Law, along with subsidiary regulations and other key documents and announcements relating to wildlife trade.

State Council Notification regarding strict control of management and utilisation of rhinoceroses, tigers and the products thereof (English translation)

SFA announcement No. 14, 2017 regarding the approving body for the captive breeding and selling, purchase and utilisation of whole specimens or the products thereof of 10 terrestrial species or types of wildlife under special state protection

China’s Wildlife Protection Law was originally enacted in 1989 and espoused a strong ethos of “breeding, domestication and utilisation” of wildlife, including endangered species that were listed has having the highest levels of protection. The Wildlife Protection Law was one of a number of laws relating to ecosystems and the environment to come under the scrutiny of the National People’s Congress (NPC) in recent years, to ensure they were compatible with the Xi Jinping’s promotion of “ecological civilisation”.

The NPC started preparation for revision of the Wildlife Protection Law in 2013 and conducted extensive research and consultation. The first version of a revised WPL was circulated for public consultation in January 2016. There was a furious backlash from Chinese academics, lawyers, biologists and NGOs as they worried that the proposed revisions, if adopted, would take China’s Wildlife Protection law and regulations in the wrong direction.  We submitted comments as part of this consultation.

In April 2016, a second version of a revised WPL was proposed, making a few concessions to some of the concerns voiced earlier, but did not go far enough. Even senior members of China’s law-making body expressed concern that the second version continued to promote utilisation over conservation, and there was a second round of public consultation. Once again we submitted a summary of key concerns and detailed suggestions to improve relevant provisions.

Two months later, the third version of a revised WPL revision was presented at an NPC Standing Committee meeting. Unlike the previous two versions, which were circulated for public comment, the third version was deliberated on by NPC members only. On 2 July 2016, this third and final version of the WPL was passed.

If you would like to learn more about the details of this revision process, We prepared a comparison table of the three revisions alongside the previous version of the law.

In October 2016, the State Forestry Administration (SFA) – the main Government department responsible for protecting wildlife and thus enforcing the Wildlife Protection Law – published a set of draft regulations which provided more detail as to how the SFA intended to put the revised law into practice.

We had major concerns about these regulations, which emphasise utilisation of wildlife over its conservation to an even greater degree than the law they are supposed to implement. Of particular concern is the regulation detailing the SFA’s ‘special marking’ scheme, which further enshrines a legal commercial trade in protected species, and the regulation on disposal of seized items, which potentially allows for the auction of seized items derived from protected wildlife such as tigers. We submitted our concerns to the SFA during its public consultation process in November 2016.

A series of additional supplementary regulations have since been released, including announcements of the first species to be included on ‘utilisation lists’. The titles of these documents make very clear that these species represent only the “first batch” to be included on the lists.

When a new State Council order was issued in 2018, allowing use of farmed tiger bone and rhino horn in medicine, we voiced our strong concerns that such a move risked being a death knell for wild tigers and rhinos. Since then, we have continued to raise the alarm over the policy – which has not been officially reversed – and advocate for an unambiguous ban on any trade in the parts and products of tigers and other big cats, including from captive sources. 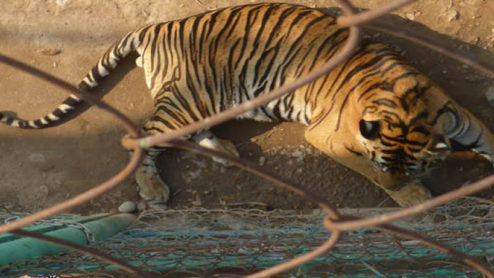 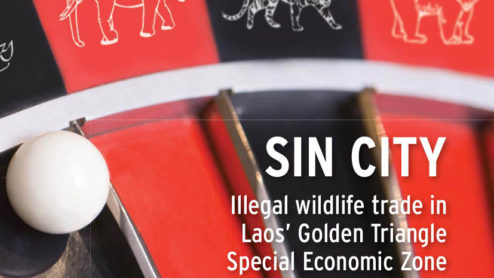