I’ve been following EIA’s work for years, so when the opportunity to join the team as a volunteer came along I didn’t think twice before sending in an application.

It’s been three months already. I came here to learn about fundraising and, boy, did I learn! Trusts and foundations, legacies, members, all sorts of donors, appeals, raffles, events, social media, advertising, online sales – you name it, I looked it up! No stone was left unturned. 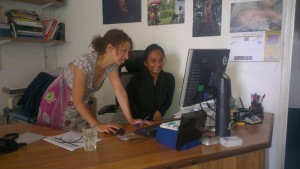 Fundraising really is an endurance sport (the Olympic season’s only just ended, I can’t help it!) – and in an organisation with so much ambition it requires a lot of stamina and persistence. Thankfully, the team has it to spare. No-one said saving the world would be easy, but these guys give it everything they’ve got. So I too got stuck right in, pulling together lists of potential funders, helping with funding requests, researching, and even participating in the strategy day!

But I was here as a volunteer, so there was no getting away from those fun (no sarcasm intended!) volunteer tasks such as envelope-stuffing, filing, listening in on meetings and asking all sorts of annoying questions.

But there is another side to it all. As it’s the fundraising team’s job to ‘sell’ these projects, I also learnt about the many projects in which EIA is involved. I heard the stories, watched the videos and browsed the immense picture collection – gruesome images of dead whales, tigers, elephants and rhinos have burnt themselves into my brain. That the investigators go out there time and again to stop these horrific crimes deserves recognition, and doing so on such a tight budget certainly calls for a medal – or at least some funding!

I’ll throw in a brief plug for EIA’s digitisation project here: the organisation is currently embarking on a new project to digitise its vast archive of film and photography, compiled during 28 years of ground-breaking investigations. Find out more about it here.

Volunteering here has been a truly special and eye-opening experience and I have come away with an immense amount of respect for the work that EIA does – work which wouldn’t happen without the awesome team and the vital funding which supports it – so why not help them today by making a donation yourself?