Amid preparations for the United Nations Framework Convention on Climate Change (UNFCCC) climate talks in Bonn this week, the Montreal Protocol quietly announced a decision to fund China’s phase-out of hydrochlorofluorocarbons (HCFCs), a move which will keep eight billion tonnes of greenhouse gases out of the atmosphere.

Even more impressively, the deal was struck for a mere US$385m – compare that with the UNFCCC’s Clean Development Mechanism which has channelled literally billions of dollars of funding to developing countries for just over one billion tonnes of emission reductions, a large proportion of which may not actually represent real additional emission reductions.

No wonder the Montreal Protocol is repeatedly described as ‘the world’s most effective environmental treaty’. Its tried and tested methodology for phasing out ozone-depleting substances has met with remarkable success. It was the first major international response to a global environmental problem, and by and large it has worked – the ozone layer is on the path to recovery.

Chlorofluorocarbons (CFCs) and HCFCs – the ozone-depleting substances – are also powerful greenhouse gases, hence their elimination by the Montreal Protocol has also had a huge impact on global climate mitigation; without the Montreal Protocol we would be in a much scarier place than we are now.

But, typical of these times, the story is not that simple. While climate-friendly alternatives for ozone-depleting substances are viable, most developed countries have wholeheartedly embraced hydrofluorocarbons (HFCs), the third generation of F-gases which are not ozone-depleting but are still greenhouse gases. If developing countries (which are only just starting to phase out HCFCs) do the same, then the beneficial effects of China’s HCFC phase-out will essentially be cancelled out by its ‘phase-in’ of HFCs. In terms of climate change, the atmosphere doesn’t care if China’s emitting HCFCs or HFCs – the end result is the same. 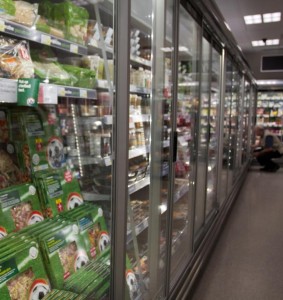 Refrigeration systems can be major users of F-gases         (c) EIA

So the big challenge now is to ensure that developing countries don’t jump from the frying pan into the fire as we in Europe and the US did, and also to get developed countries to move swiftly away from their addiction to HFCs. Europe is already doing this with a revision of its current F-Gas legislation, while other countries are imposing HFC taxes in order to push transitions to climate-friendly alternatives, which are often more expensive upfront as they don’t have the comparable economies of scale afforded by the widespread uptake of HFC equipment and products (although it’s important to note that cheaper running costs over the lifetime of the equipment usually balance out the higher initial outlay).

As climate negotiators meet in Bonn this week, the global elimination of HFCs is one item that could see some progress in discussions about pre-2020 mitigation ambition, ie, what countries should do before the global climate agreement (yet to be agreed!) kicks in to address the so-called gigatonne gap. Proposals have been laid before the Montreal Protocol for the past four years to agree a production and use phase-down of HFCs.

An encouraging signal from Bonn and the next climate Conference of the Parties in Warsaw to place this in the safe hands of the Montreal Protocol would be the most sensible step the UNFCCC has taken so far.