Last Thursday (October 17) saw a live debate in London organised by EarthWatch Institute as to whether the time was right to consider a legal trade of some endangered wildlife products such as ivory, rhino horn or tiger skins and parts. 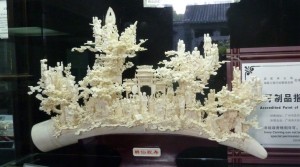 During the event, one of the pro-trade panelists, Kirsten Conrad, suggested that demand from Asia for wildlife products cannot be eliminated because the Asian culture has “a deep tradition of using wildlife” and that will and cannot be changed.

She told the (mostly) Western audience that there are fundamental differences in how Asia and the West perceive conservation, and that Asians “will only protect the animals if they are useful to humans”.

Ms Conrad may have a profound understanding of Asian cultures as she lives in the region but as a native Chinese, I felt badly mis-represented – like many Asians working in the field of conservation, I share the universal value of wildlife and work for an organisation with a vision of a future where humanity respects, protects and celebrates the natural world for the benefit of all.

During her presentation, Ms Conrad also claimed that Westerners risk posing as cultural imperialists if they are to work against the cultural needs of using wildlife in Asia. Ironically, this generalisation is not only self-contradictory, but also fails to capture the reality and changing trends in Asia, including China.

First of all, the demand for wildlife products is increasingly non-cultural. As many have witnessed, the endangered wildlife products have become luxury items, a symbol of social status and an inflation-proof investment. They are often presented as decadent gifts, far out of the reach of the working class (who are still the vast majority in China). These products are valuable not because people are culturally attached to them but, rather, the prices are inflated by people who are banking on the extinction of the species.

Secondly, it is ignorant to think Asian cultures are static and Asian people don’t care about animals. Taiwan used to be a major consumer of wildlife products but, in the past two decades, civil movements have pushed the country’s Wildlife Conservation Act through eight amendments until it reflects the society’s increasing awareness of wildlife conservation and animal welfare.

In mainland China, members of the Parliament, the National People’s Congress (NPC), have for nearly a decade been submitting proposals to change the law that governs wildlife conservation. Just this September, an NPC committee has announced that the law will be reviewed and updated.

Grassroots campaigns are also yielding returns after years of hard work. As The Washington Post recently reported, the hugely successful shark fin campaigns in China are an example proving it is possible to cut a demand that has existed for 1,000 years. But such successes rest on the understanding that Chinese people in general share the universal compassion for animals and that their “consumption is based on ignorance rather than malice” (Peter Knights, executive director of WildAid).

What is especially unique in the shark fin story in China is that the Government of China has sent a clear message to support the banning of shark fin consumption – it pledged to ban shark fin soup from official banquets within three years; similar instructions were also put forward by the Hong Kong Government, a centre of global shark fin business. These added a special leverage to the shark fin campaigns.

The ‘tradition’ argument is fundamentally flawed and counter-constructive. I believe I am not the only Asian who understands that human needs and traditions should give way to the survival of other species.

To stop the trade that poses critical threats to the last populations of tigers, rhinos, elephants and other creatures, I strongly urge governments everywhere to take bold and consistent actions such as trade bans to clearly define, for both consumers and the enforcement community, in black and white terms exactly where the boundaries are regarding what’s legal and what’s not.