This morning I tuned into the live broadcast of the landmark case being heard in the International Court of Justice in The Hague. In 2010 Australia filed proceedings against Japan’s program of ‘scientific’ whaling in the Antarctic on the basis that: 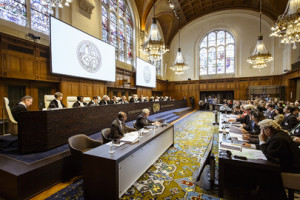 “Japan’s continued pursuit of a large scale program of whaling under the Second Phase of its Japanese Whale Research Program under Special Permit in the Antarctic (“JARPA II”) [is] in breach of obligations assumed by Japan under the International Convention for the Regulation of Whaling (“ICRW”), as well as its other international obligations for the preservation of marine mammals and marine environment”. 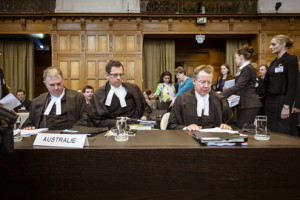 Members of the delegation of Australia at the opening of hearings 26th June 2013 The Hague, Netherlands

I listened keenly as Australia presented its opening arguments. Whilst I am not an impartial listener in these proceedings, they present a convincing critique that for over twenty years Japan has been “Cloaking whaling in the lab-coat of science”. As Australia pointed out the scale, repetition and business-like operation of the research program, where the meat is sold commercially and the proceeds of sale are used to fund further ‘research’ are the very traits of a commercial operation. The continuity of the transition from commercial operations, from when it dropped its objection to the moratorium in 1985 to proposing ‘scientific’ whaling in 1986, using the same vessels, methods and crew, indicate the real purpose of Japan’s whaling – to sustain its whaling industry. 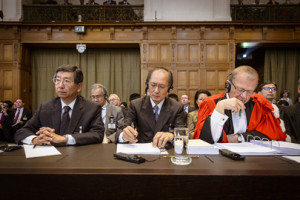 Members of the delegation of Japan at the opening of hearings, 26th June 2013 The Hague, Netherlands

Under two ‘research’ programs Japan has unilaterally set itself catch limits allowing it to kill over 950 whales in the Antarctic and a further 160 in the North Pacific each year, including permits for the endangered fin whale. More than 14,000 whales have been killed in Japan’s research programs since they commenced. The science of their operations has been extensively criticized; amongst other things for the use of lethal techniques where non-lethal methods are available, a lack of testable hypotheses, the lack of peer review and despite having operated for over twenty years their research has failed to demonstrate any relevance for the conservation and management of whale stocks.

EIA has been at the forefront of efforts to maintain the hard won victory of the moratorium and the movement of the International Whaling Commission’s focus away from lethal exploitation towards conservation. So we will listen with bated breath to hear the outcome of this case, which could have huge implications for Japan, the IWC, and the conservation of whales in the Antarctic.

Watch this space as we bring you interesting updates on the development of this case over the next 3 weeks.