“For a tiny charity, it packs an almighty punch.”

As descriptions of EIA go, they don’t get much pithier that this one from The Guardian in 2008.

And if 2012 has shown anything, it’s that we’re still small and that our concise reports anchored in hard documentary evidence – often obtained undercover in potentially dangerous circumstances – continue to give us the clout to punch well above our weight.

The year has seen EIA working for the first time in Myanmar and conducting our first field investigation in Mozambique, while progressing our active campaigns for Forests, Tigers, Elephants, Cetaceans and Global Environment, calling China to account over its illegal timber trade and going up against some of the Goliaths of the internet to stop them cashing in on the slaughter of whales and dolphins.

Here are just a few of the highlights from a busy and successful year:

• Amazon.com profits from slaughter of whales

Our campaign in February to urge internet giant Amazon to clean house and ban all cetacean products being sold via its subsidiary Amazon Japan was the first time we had attempted to harness the power of consumer support to help press our case – and the first time a campaign of this nature met with the unprecedented success of achieving its aim in such a spectacularly short time!

Within a day of being bombarded with thousands of messages of protest via email and social media, the company withdraw all cetacean products and just days later confirmed a permanent ban on them.

Encouraged by this success, we returned to our ongoing campaign to urge Yahoo! to follow suit and ban cetacean meat sales via Yahoo! Japan. At the time of writing, we’re still pressing Yahoo! for a response.

In March, we released a new briefing, Blood Ivory: Exposing the myth of a regulated market, urging Governments to take responsibility for the abject failure of ‘legal’ trade in ivory by acting to reverse the harm it has done to global elephant populations.

Calling for all CITES-sanctioned ivory auctions to be stopped, we further called for China to be stripped of its Approved Buyer status if the rising tide of elephant poaching is to be curbed.

As we pressed the case for the UK and its EU partners to review China’s domestic ivory trade control, regulation and implementation, EIA Executive Director Mary Rice gave evidence on the ivory trade to the UK House of Commons Environmental Audit Committee’s hearing on Wildlife Crime.

April got off to a great start as three films featuring our work picked up top awards at the 35th International Wildlife Film Festival in Montana, US – Blood Ivory and Making Killing, both made by Red Earth Studio for National Geographic, and the BBC Natural History Unit’s Madagascar, Lemurs & Spies.

Not to be outdone, Making a Killing, about the exposure of Iceland’s hunting of endangered fin whales for export to Japan, was awarded Best of Category: News.

As Tiger Range Countries met in Delhi in May, we issued a call for all tiger countries to shut down breeding centres, or tiger farms.

Lead campaigner Debbie Banks warned that concrete action is needed to shut down tiger breeding operations and destroy their stockpiles of tiger skins and bones if the Global Tiger Recovery Programme is to retain serious credibility, adding that operations in Thailand, Laos and Vietnam have been implicated in the illegal international trade, while breeders in China are allowed to sell farmed tiger skins on the domestic market.

Debbie and her team have worked hard throughout the year, with partners and concerned governments, to ensure that tiger farming is on the agenda at CITES in March 2013

In mid-May, we revealed in the new report Clear-Cut Exploitation how an Indonesian oil palm plantation in which Norway has a financial stake paid Papuan tribal landowners as little as US$0.65 per hectare for their forestland.

In July, we continued to expose major problems in the palm oil sector with the report Testing The Law, throwing a spotlight on systemic law enforcement failings with threaten to make a mockery of Indonesia’s pledge to reduce deforestation and carbon emissions by enabling plantation companies to destroy carbon-rich peatlands with impunity.

EIA campaigners returned in May to the forest community of Muara Tae, in Indonesia’s East Kalimantan province, where villagers are attempting to stand against devastating encroachment by palm oil plantations.

We’ve been working with the indigenous Dayak Benuaq community and our Indonesian partner Telapak on the ground since November 2011 and went back to share our wealth of campaigning experience, supplying cameras and training to enable villagers to capture visual evidence of the destruction of their environment and to expose such abuses to a wider audience

The struggle intensified in September when the community was all but invaded by two companies hell-bent on clearing land for palm oil plantation, while armed police stood to one side to intimidate residents.

In October, EIA filed a formal complaint with the international Roundtable on Sustainable Palm Oil (RSPO) – but the following month was compelled to public with stinging criticisms of the RSPO for failing to act. Widespread coverage – particularly by supporters via Twitter and Facebook – appeared to make a difference and the RSPO promptly ran our complaint on its website.

Only last week we learnt that the RSPO had upheld our complaint in its entirety and ordered the company First Resources Ltd to cease its activities, buying Muara Tae a period of respite – although the community’s fight for land rights is likely far from over.

In July, the latest instalment of our Chilling Facts report was able to announce that climate-friendly technology has gone mainstream in the UK and other parts of Europe.

Since 2008, Chilling Facts has sought to encourage the retail sector to move away from refrigeration systems based on hydrofluorocarbons (HFCs), powerful global warming gases hundreds to thousands of times more potent than carbon dioxide (CO2).

From just 14 stores in the UK using climate-friendly refrigeration systems in 2008, Chilling Facts IV reported that 344 stores have now made the transition, with thousands of engineers trained to service them..

Despite the set-back of last year’s tsunami and its devastating impact on local communities, in August we reported that Japan’s annual Dall’s porpoise hunt was back, albeit in a reduced version.

The hand harpoon hunt has previously claimed up to 15,000 Dall’s porpoises a year. Along with the ongoing dolphin hunts at Taiji, it continues to supply Japanese consumers with cetacean meat contaminated with dangerous pollutants, including mercury and polychlorinated biphenyls (PCBs); some Dall’s products have been found to contain PCB levels eight times the recommended safe maximum.

In September, EIA and eight other NGOs wrote to the Prime Minister of the Faroe Islands, Kaj Leo Johannesen, to express our deep concerns about the high number of pilot whales killed there so far this year.

In the year to August 24, 590 long-finned pilot whales were killed on the Islands, bring the total number of pilot whales killed since the beginning of 2010 to 2,423 and raising serious human health, animal welfare and conservation concerns.

More than a year after we exposed the major players in the smuggling of timber from Laos, a new report in late September revealed that the Vietnamese timber industry, the military and well-connected Lao actors are still profiting from the flow of logs into Vietnam.

As well as the role played by a commercial operation of the Vietnam People’s Army, the report Checkpoints: How Powerful Interest Groups Continue to Undermine Forest Governance in Laos details how Laos’ attempts to protect its forests are being corroded by the circumvention of Lao law by companies with key political contacts. 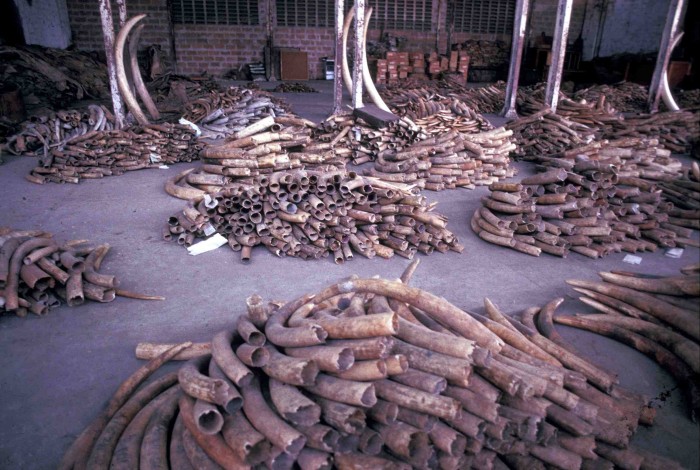 In October, we were the first NGO to draw attention to an ‘untimely and ludicrous’ application by Tanzania for CITES approval to reduce protection for its elephant population and hold a one-off sale of 101 tonnes of stockpiled ivory.

Our previous investigations played a key role in a similar application from Tanzania being rejected in 2010.

We kept up the focus and pressure on Tanzania, highlighting major ivory busts, Tanzania’s connection to them and how, in such circumstances, it’s bid to sell ivory looked ever more inappropriate.

And just a couple of days before Christmas it paid off as Tanzania finally chose to do the right thing and drop its application!

• On the road in Myanmar

Members of our forests and communications teams participated in an outreach road tour in Myanmar with Indonesian civil society to spread ideas and knowhow regarding the role of civil society in monitoring illegal logging.

The trip included the northern state of Kachin, as well as meetings with elected ethnic parliamentarians in Nyipadaw and civil society organisations in Yangon.

The visit was a first for the organisation and met with a tremendous response from stakeholders.

Following more than year of work seeking to ensure that the European Union’s review of its F-Gas Regulation was progressive, in November we were disappointed to report that the European Commission’s initially ambitious draft proposals had been watered down and were lacking ambition.

EIA Senior Campaigner Clare Perry observed: “We welcome the confirmation that Europe will begin phasing-out HFCs; however, the proposal is a missed opportunity and shows all the hallmarks of heavy industry lobbying. More ambitious draft proposals that were leaked previously have been watered down, bans have been removed and what have left is lacking in ambition.”

Our forests team travelled to Beijing in late November to release a major new report revealing that China is now the world’s single largest international consumer of illegal timber.

Featuring case studies from countries such as Mozambique, Myanmar, Madagascar, Indonesia and the Russian Far East, Appetite for Destruction: China’s Trade in Illegal Timber showed how China has taken vigorous steps to protect and re-grow its own forests while its demand for raw materials has left it effectively exporting deforestation around the world.

The report launch was exceptionally well received, garnering international media coverage, a lot of interest from Chinese media and activists and even a positive response from the Chinese Government.

Looking ahead to 2013, our various campaigns are already hard at word preparing for the March meeting of CITES where the issues on the agenda will include discussion of a mechanism for ivory trade, tiger farms and Thailand’s application to have rosewood listed for protection.

In addition, the European Union’s new Timber Regulation – a key piece of legislation which EIA played a key role in achieving – comes into effect in March, forbidding the placement of stolen wood on the market.

And that’s just the start …

On behalf of everybody here at EIA, from the London HQ team to far-flung investigators working undercover around the world, thank-you for your dedication, enthusiasm, generosity and support throughout the year – and all best wishes for a peaceful and industrious 2013.