For ages I’ve been talking about doing a Tango for Tigers, raising awareness and funds for tigers via the dance floor. 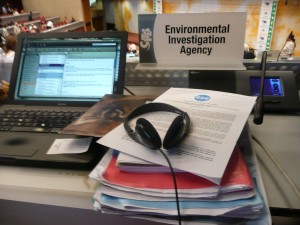 This week, however, the tango has taken place from the floor of a conference hall in Geneva, where Parties to the UN Convention on International Trade in Endangered Species (CITES) have been talking tigers.

Negotiations over the text of a decision which calls for actions in countries that have tiger farms have had all the hallmarks of a complex tango routine, fraught with tension and passion.

On Wednesday, the Global Tiger Initiative (GTI) Secretariat reported on all the positive actions taking place to save wild tigers, but closed with an alert to CITES Parties over the “mushrooming” of tiger farms, not just in China but across SouthEast Asia.

India followed up, expressing once more its concern over the lack of reporting on action to phase out tiger farms and over the growing stocks of tiger skins, bones and carcasses that are piling up in freezers on tiger farms. It pointed out that CITES adopted a Decision way back in 2007 calling for an end to tiger farming but there has been inadequate reporting on progress.

It asked the CITES meeting to agree a deadline by which Parties must report on actions taken to end farming, and actions to be taken to “consolidate and destroy” stockpiles. India went on to make it clear that CITES must be prepared to address non-compliance in this regard. It was time to get tough.

China was quick off the mark to claim that illegal trade has been well controlled in it country in recent years, that it doesn’t allow trade in tiger bone for medicinal purposes (no mention of its legal skin trade!), that it hasn’t seen any evidence of trade from farmed tigers, and is not aware of tiger farms affecting wild tiger conservation.

The UK, on behalf of the European Union and as a member of the CITES Standing Committee, stepped in to support the suggestion from India regarding time-bound reporting requirements. It also drew attention to the forgotten cats of Asia and asked the Secretariat to remind relevant Parties of their obligations to report on leopards, snow leopards, clouded leopards and Asiatic lion too.

Egypt called for demand reduction campaigns that would make the use of tiger parts unfashionable, the USA supported the idea of performance indicators tied to compliance measures and Israel urged CITES to take whatever steps were necessary to ensure Decision 14.69 to phase out tiger farms is implemented. 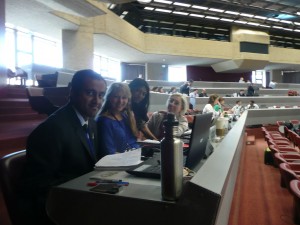 Pictured with Avinash Basker of the Wildlife Protection Society of India, are, left to right, Debbie Banks, Shruti Suresh and Mary Rice

The Wildlife Protection Society of India delivered the intervention on behalf of all of we Species Survival Network members, endorsing the suggestions from India and the UK, but also taking the floor to highlight how clearly China is undermining Decision 14.69 by proactively encouraging the registering, labelling and sale of skins of captive-bred tigers.

The GTI had the final word, with an offer of $100,000 for a thorough investigation of the tiger farm situation, which promptly sent the Chinese delegation into a tailspin.

There were no comments from other members of the CITES Standing Committee members and the agenda item was closed. Done and dusted. Or so we thought.

The tango was resumed on Friday morning. The UK provided language for the way forward based on its consultations with India, because the decision was not adequately reflected in the executive summary of Wednesday’s meeting. The Standing Committee approved the recommendation and the Chair closed the agenda item once again. There followed a furious outburst from the Chinese delegation!

There was a great deal of electronic and physical scurrying around between China, the UK and India to resolve the issue, the equivalent of a fast and furious milonga! Collectively as NGOs, EIA, WPSI, IFAW, HSI, Born Free and other members of the SSN had done everything we could to get the right information into the right hands at the right time. It was down to the governments to fight it out.

After a couple of tense hours, and a tiny modification to language, we have an agreement that the CITES Secretariat will send a Notification to Parties, reminding them of their reporting obligations, to enable a full assessment at the 16thCoP next March, and that the Notification should stress that the reporting requirements relate to all Asian big cats and not just tigers, and should also stress the need for information relating to compliance with Decision 14.69 by requesting:
• that all Parties with intensive operations breeding tigers on a commercial scale fully implement Decision 14.69 in respect of the number of breeding operations and also the total number of tigers;
• all Parties to declare stockpiles of captive-bred or confiscated tiger body parts and derivatives along with actions proposed to “deal with” (originally it said “consolidate and destroy”) the stockpiles (originally said “the same”).

Until I take the floor again, I would just like to say a special thank-you to our friends on the UK and Indian delegations, and to WPSI, HSI, IFAW, Born Free and the Global Tiger Initiative for the united efforts to keep tiger farms high on the CITES agenda.