Here at EIA we’re more accustomed to blazing trails, sticking our necks out and raising the alarm on emerging issues than blowing our own trumpet. 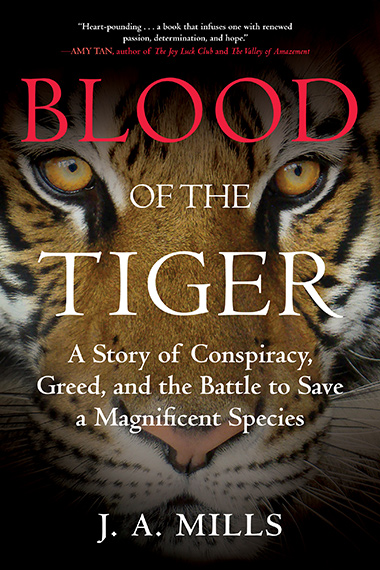 Nevertheless, I couldn’t help but be proud to read JA Mills’ perspective of EIA’s role in the conservation of tigers and other wildlife, and that of my colleagues past and present. Mills’ Blood of the Tiger: A Story of Conspiracy, Greed and the Battle to Save a Magnificent Species is her personal account of a tumultuous emotional battle set against the backdrop of the twists and turns of international politics.

It’s a behind-the-scenes analysis of the ups and downs, successes and failures, friends and foes in the international tiger conservation community. It gives readers all the insight they need to understand how we have ended up where we are, in a world where there are more tigers in ’farms‘ than in the wild, where tigers are treated as agri-business commodities rather than as symbols of a green future, and where the international political community appears, quite simply, to have lost its cojones.

The “Art of War” and “Dragon” references throughout the book leave us in no doubt as to the names and conflicts of interest among China’s officialdom that underpin the plight of the tiger. The policies at the heart of fuelling demand for the body parts of tigers, bears, elephants and rhinos are picked apart, leaving no place for pro-trade proponents to hide.

I have the good fortune to count Judy as both a friend and ally. I know what the tiger, and the fight for its survival, means to her and what she has sacrificed to sustain that fight. Blood of the Tiger is not only her story it is also the story of those with whom she has stood shoulder-to-shoulder in the name of the tiger.

And while at times it is a heart-wrenching and wounded account, it also provides an accessible insight to the uninitiated.

I can’t deny that EIA features heavily in Judy’s story and therefore bow to her for giving us a blinding piece of PR by acknowledging the impact our tiny organisation of big-hitters has had over the decades.

Among those detailed within the pages of this book are EIA’s founding fathers Allan Thornton and Dave Currey; EIA investigators, both named (Steve Galster and Justin Gosling) and unnamed (you know who you are); a nod to the pioneer of demand-reduction campaigns, Pete Knights; strategist Steve Trent; todays’ Tiger Team leader Debbie Banks and campaigner Shruti Suresh.

Of course, there is a whole ambush of tigers at EIA, past and present, who haven’t popped up on Judy’s radar but, on behalf of Debbie and myself, I thank all of you. This book is your story too.

Blood of the Tiger is now available to buy in the UK via Amazon now.