This week I’m in Delhi attending a “stocktaking” conference as a follow-up to the Global Tiger Recovery Programme. 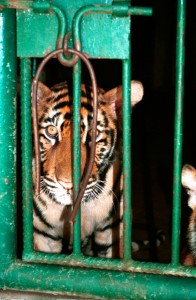 As they did last year, the Tiger Range Country governments will be reporting on actions implemented against their “to do” lists. The process is still very much one of self-assessment, in the absence of any agreed monitoring framework. It’s a packed agenda, especially the session on poaching and illegal trade, and the discussion on demand reduction is sure to be lively given that tiger farming completely undermines any efforts in that regard.

The adoption of some kind of monitoring framework is essential if donors, civil society and communities are to have faith in the statements and commitments being made by governments. The Environmental Investigation Agency has been promoting the adoption of a set of indicators against which national and international law enforcement actions to combat trafficking can be evaluated, and already there are signs that some of the Tiger Range Countries endorse the concept.

As always, the challenge lies in the implementation at a local level, whether it’s China and enforcement in the Provinces that are far from Beijing, or India and good governance by State governments far from Delhi.

We recently visited Simlipal Tiger Reserve in the state of Odisha, India or, at least, its buffer zone; access by foreigners is currently suspended following the kidnapping of Italian tourists in a nearby district.

Simlipal is one of the original tiger reserves declared in 1973 under the auspices of Project Tiger. It’s famous for being home to melanistic or black tigers, a massive forest area of 2750 sq km falling within a vital Biosphere Reserve of 5000 sq km. Prime habitat for tigers, prey species and elephants.

In 2009, the tiger reserve staff and infrastructure came under sustained attacks from Maoist extremist groups. Since then, two separate missions have been dispatched by the National Tiger Conservation Authority to investigate the situation and recommend action to get Simlipal Tiger Reserve back on its feet. Their reports and recommendations are available for all to see, yet it seems the Odisha state government is not interested in implementing them.

Staff have returned to their posts, but when we were there they were unarmed, poorly equipped, trained and supported – yet still expected to patrol and protect this vital forest.

Not surprisingly, protection has suffered. In February this year, approximately 1,000 armed people entered the park to hunt wildlife, including species upon which tigers depend for food. Yet the local daily wage labourers who constitute the frontline defence – for which they are paid less than USD$50 per month – can only wave sticks and appeal to the hunters to stop. They have no mosquito nets, anti-malarial medicines nor food rations and have received virtually no training about patrolling, security and monitoring. Money is not the issue; Simlipal is awash with funds from the central government and there are numerous national and state schemes to support local workers. 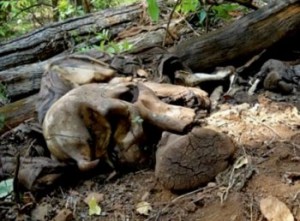 Poaching of elephants is also a major problem for Simlipal, albeit one that certain officers within the Forest Department have tried to cover up. In 2010, local wildlife and social activists uncovered the scandal when they exposed efforts by forest officers to dispose of elephant carcasses without reporting them. A total of 23 elephant poaching incidents were uncovered. Despite the publicity surrounding this shocking revelation, and specific recommendations by Biswajit Mohanty and Belinda Wright who formed the NTCA mission in 2010, it would appear that nothing much has changed.

While we were there, news emerged of a further five confirmed cases of elephant carcasses being burnt and buried by forest officers inside the core area. Once again, informants who are more comfortable liaising with a team of local activists and the Honorary Wildlife Warden passed on information.

Fortunately, the new Field Director and one of the Divisional Forest Officers want to see a resolution to these problems and dispatched the independent team to investigate.

But the action can’t end there. No-one was held accountable for the elephant poaching and cover up the last time, the State government has ignored the findings of central government missions and has even gone so far as to proactively block the creation of a committee to monitor and report on implementation of those recommendations.

This time the Odisha State government has to demonstrate it is truly committed to Simlipal. Whoever gave the order to burn the carcasses in the heart of Simlipal must be held accountable. The monitoring committee must be established to ensure implementation of the NTCA mission recommendations. The State government must give that committee its full cooperation.

Next week, the Chief Minister of Odisha, Naveen Pattnaik, will be visiting the UK to promote Odisha’s handicraft and textile industry and discuss development issues with our UK Department for International Development; the security of critical watershed forests and ecosystems such as Simlipal must be on that agenda.