On November 6, the Environmental Investigation Agency released a major new report detailing rampant elephant poaching and ivory smuggling in Tanzania, with the bulk of the contraband tusks bound for the Chinese market. 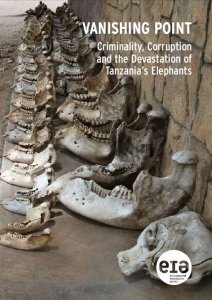 The report, entitled Vanishing Point, was the result of exhaustive research and a series of undercover investigations carried out by EIA in Tanzania and China, dating back to 2006. Media coverage of the report prompted a series of blanket denials from Tanzanian and Chinese government officials, ranging from the predictable to the bizarre.

Such responses are part of the cut-and-thrust of campaigning but it is important to understand the context behind these responses, and the use of misdirection and outrage to avoid answering the main charge of the report – that corruption and criminality in Tanzania has led to the country losing more elephants to poaching than anywhere else, to supply the burgeoning demand for ivory among sections of Chinese society.

So, here is EIA’s view on the main responses over the past two weeks.

First off the mark was Dr Meng Xianlin, director-general of the Endangered Species Import and Export Management Office of China. He told journalists, mere hours after the report was released, that EIA was a “dodgy organisation” and that the findings in the report were “baloney”. While his language is quite unusual for a Chinese Government official, and might even suggest an interest in old gangster movies, it is truly impressive that he was able to thoroughly check all of the information in EIA’s 36-page report and dismiss it out of hand in such a short space of time.

For example, Vanishing Point contained information about a Chinese national called Yu Bo who earlier this year was sentenced to 20 years in prison for attempting to smuggle ivory tusks onto a Chinese naval vessel docked in Dar es Salaam port. Meng’s response was that “if such a Chinese national was caught, I would have seen police reports. There was no such report from Tanzania or anywhere”. In fact, the Yu Bo case was widely reported in the Tanzanian media and EIA has seen the court indictment against him and confirmed his presence in jail in Dar es Salaam. But because Dr Meng was not personally informed of the case, it apparently does not exist. 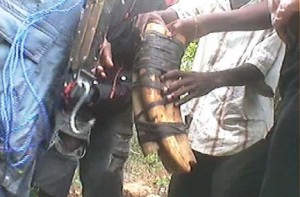 Tusks from young elephants offered for sale in Selous, Tanzania, in 2010 (c) EIA

When it comes to rubbishing EIA’s evidence Dr Meng has, quite literally, previous form. In 2006, EIA staff attended a meeting of the UN Convention on International Trade in Endangered Species (CITES) in Geneva and placed on a display table copies of a briefing document on the illegal trade in tiger skins to China. EIA staff then witnessed Dr Meng pick up the pile of reports, leave the building and throw them into a skip. Which is certainly one way of dealing with unpalatable facts.

At another CITES meeting, in 2011, the Chinese delegation successfully had NGOs expelled from the conference room for the discussion about elephants. Dr Meng later told a National Geographic reporter that the reason for China’s ire was an EIA report revealing that 90 per cent of ivory on the Chinese market was illegal, adding that while he conceded ‘80 per cent of EIA’s report was true’ he felt “they should have come to us first”. Baloney indeed.

The next response to Vanishing Point came from Chinese Foreign Ministry spokesman Hong Lei. Asked about the report at a daily press briefing on November 6, Hong described it as “groundless” and added that China was “strongly dissatisfied” with it. Of course, the standard response by government spokespeople when put on the spot about a report they most likely have not read is to deny everything, express a sense of outrage or to fall back onto an official line.

In terms of the latter option, the Foreign Ministry is well-versed. At the daily briefing in November 2012, Hong Fei was asked to comment on the findings of a new EIA report showing China’s leading role in the global illegal timber trade. He replied: “We strongly oppose and fight illegal logging and trade, adhere to the strategy of cooperative management over forest resources featuring mutual benefit and sustainable development.”

Eighteen months later at the daily briefing, a question was asked about trade in illegal timber from Guinea-Bissau to China. This time is was a different spokesperson, Hua Chunjing, but a strangely familiar response: “We firmly oppose and crack down on illegal logging and relevant trade behaviours, and stick to the management and cooperation strategy on forest resources that is mutually beneficial and sustainable.”

In Tanzania, the response to Vanishing Point was led by the Minister for Foreign Affairs, Bernard Membe. In a statement to Parliament on November 7, Mr Membe had a conspiracy to unveil: “The EIA report has been cooked up with the aim of tainting the good reputation of our country and that of our friends, the People’s Republic of China. It is a patched up report, whose release has been timed to serve an agenda well known to us.”

So what agenda could Mr Membe be referring to? He went on to explain: “Why should the report be published after the national address by our President in which he detailed the success of his visit to China? Everybody can guess the answers. The peddlers of such reports do not wish our country well. They do not wish our Chinese friends well.”

For the record, Mr Membe, EIA’s report was launched on November 6 simply to coincide with a major regional summit on wildlife crime in Arusha, Tanzania. This was over two weeks after President Kikwete’s trip to China.

EIA’s only agenda in Tanzania is to press for the protection of its elephant population and for the Government to enforce its own laws. To imply that EIA is somehow trying to influence geopolitics is patently ridiculous but at least it helps to avoid having to answer uncomfortable questions, such as how Tanzania has lost half of its elephant population to poaching in the past five years..

Mr Membe himself should be fully aware of the elephant crisis in his country. He is the Member of Parliament for Mtama, in the Lindi Region of southern Tanzania. His constituency is near the Selous Game Reserve, where the elephant population plunged by 67 per cent in just four years, from 38,975 animals to 13,000. Faced with such damning evidence, denial is predictable. As Mr Membe told Parliament: “Accusations the Government of Tanzania pays no attention to illegal ivory trade, and takes no action against culprits of the crime, are baseless.” However, EIA’s report provides clear evidence directly countering his glib assurances.

Of course, EIA stands by the findings of its report. It is to be hoped that once the dust settles and the politicians have had their say, the detailed intelligence EIA has provided to enforcement agencies will be of use in disrupting the lethal activities of the ivory smuggling syndicates and in securing protection for Tanzania’s remaining elephant population.