“But Faith, snakes are wonderful,” Hapsoro said to me one afternoon as we were discussing life, love and the universe.“I look for them when walking in the forests.”

We were about to visit Indonesia’s Tanjung Putting National Park in the coming days, I began to think twice about what I was getting myself into. As it turned out, Tanjung Putting is basically a swamp, (okay a very important swamp, especially for orang-utans); it’s a humid, difficult forest to wander about it and snakes were the last thing on my mind while we were there. Hapsoro was able to almost literally walk on water while I was bumbling around through leeches and dodgy bits of the forest floor. By late afternoon, Hapsoro could no longer contain his laughter and we spent the rest of the trip giggling at my attempts to film and photograph damage done through illegal logging. I will never forget that trip we did together; it was one of the few times I’ve travelled to a forest with someone and felt utterly and completely safe. With Hapsoro beside me I knew nothing bad would happen, and those pesky snakes would be taken care of.

Travelling in Burma two weeks ago, after a six-hour drive to Yangon, an EIA team of forest activists, including our Indonesian friends Minang and Zain from Telapak, were greeted by the terrible news that Hapsoro had died from cardiac arrest. With an intermittent internet connection and great difficulty in making phone calls, we managed to contact both the EIA office in London and close personal friends in Indonesia to find out what had happened. We managed to get Minang and Zain out on the next available flight back to Jakarta, and travelling with them were all our love, thoughts and prayers for Hapsoro’s wife Nikan and their three children. 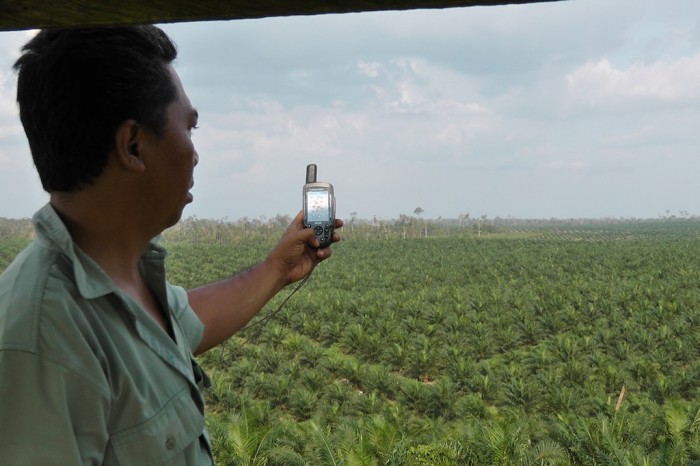 Hapsoro at work in an oil palm concession (c) EIA

The forest team in EIA has worked for more than a decade with fellow activists in Indonesia, and in the very early days after the fall of Suharto we found our long-term friends from Telapak. The founding members, who included Hapsoro, were all from Bogor Agriculture University where they belonged to a nature club and they have since worked with hundreds of members in Telapak to protect both the environment and the people who rely on it. As an organisation, EIA has felt the loss of Hapsoro in a major way and our forest team is devastated. I mourn the loss of my friend, and in remembering Hapsoro I remember the most important thing in his life; his family.

In the early days when our friends from Telapak in Bogor started having babies, we spent many occasions hanging out with their families. I used to joke with him that it was the Indonesian rice and amount of chillies eaten that produced all these fabulous Telapak babies, one after another. The baby factory in Bogor was a running joke between us.  Hapsoro, Ruwi, Nikan, Minang, Arbi, and others would come and spend time with us when we had to spend a weekend in Jakarta. We would sometimes swim together.  I remember Galuh, Hapsoro’s eldest daughter who couldn’t have been more than two at the time, standing on the side of the pool with her father in the water calling for her to jump in. Galuh was the spitting image of Hapsoro, right down to his solid legs, curly hair and a smile that lit up a room. She jumped, no fear, straight to the security her father. A brilliant, fabulous ball of energy, Galuh is her father’s daughter and someone I have seen grow up into the talented, gifted and musical child he was so very proud of.

A few years on, and many investigations and reports later, Nikan and Hapsoro had a son. I remember getting the message and that he had called him Elang (‘Eagle’ in English); we all nodded knowingly when we heard as it felt so appropriate. On our last visit to Nikan and Hapsoro’s house, we spent a fabulous evening being entertained by all of their children. Elang was really into Spiderman, so much so that he dressed up for us, mask and all, and had a great time whizzing around the room having his photo taken.

And then there was Arum, the little one of the family. With her mega-watt smile, cuddles and uninhibited love for all of us, we were enveloped that night by Hapsoro’s family with so much laughter and so many smiles.

In 2000, when Ruwi and I were kidnapped by Sugianto, timber baron Abdul Rasyid’s nephew and a director of Tanjung Lingga, and after we managed to escape and get to Jakarta, it was Hapsoro who greeted us late at night, a car and security organised to get us away from Sugianto’s thugs. Between him, Minang, Arbi and others in Telapak, they quite literally saved our lives.

The last time I saw Hapsoro was in May this year. We met in the Forest Watch office in Bogor and talked about plans for the future. Since then, and right up until the day he died, plans were being made. When I opened my emails on that terrible day there was a message from him, excited and confirming the next steps for our plans in November. At the end of the message his note “Sorry to bother you” was heartbreaking, “see you soon” even more so.