We started this week with the voice of a child, pleading with world leaders at the UN Climate Summit to act on the climate crisis.

But the weak outcomes on Monday suggest they weren’t hearing the pressing importance of the message from Swedish climate activist Greta Thunberg, who cried ‘shame!’ on them for not doing anything like enough to combat the emergency.

It’s not as if what they need to understand and act on is particularly complicated – in short, climate change is not a standalone issue but a crisis impacting on and threatening every aspect of life on Earth.

The climate, forests, oceans, wildlife and plants are all one thing, existing, to one extent or another, in a state of co-dependence and all have a part to play in the fight against global warming.

This might seem so self-evident that is shouldn’t need stating so bluntly – and yet the way in which we exchange information, from television and newspaper reports to one-on-one conversations and political briefings, can often stymie proper understanding. 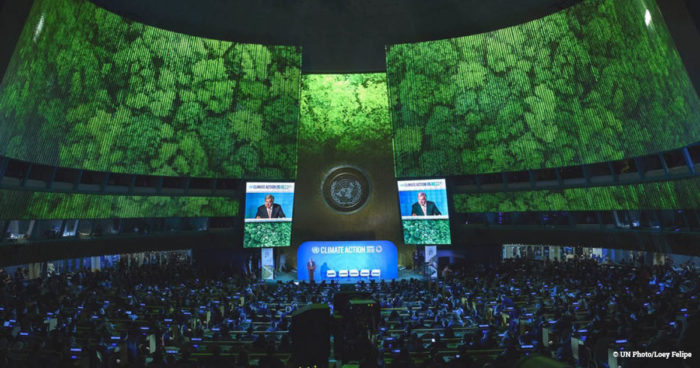 World leaders gather at the UN Climate Summit on Monday

It’s a commonplace trait of the way the human mind works that we look for the top message and share that first, before going on to explain or amplify that key fact in more detail. It’s only towards the end that we introduce other relevant information.

In news reporting, this is largely done with a view to first grabbing a casual reader’s attention and then holding onto it as long as possible. A tenet of journalism schools around the world is that only a small proportion of readers will make it to the end, so reporters aim to get their key message in at the top in the knowledge that most people won’t get much further than the first few paragraphs. Some won’t even make it past the headline.

This can work well in relatively simple narratives but not for complex issues such as climate change.

How can we begin to grasp the full extent and interconnectivity of the issue when most climate coverage starts off with an eye-catching but intentionally simple headline – say, ‘Leading scientists warn climate change is speeding up’ – and then sets about explaining that proposition? By the time many articles have got that out of the way and moved into a more detail understanding of what climate change actually means, many of us will have stopped reading.

But this is important stuff and we need to know it up-front if we’re to get our collective heads around the scale and extent of the threat posed. 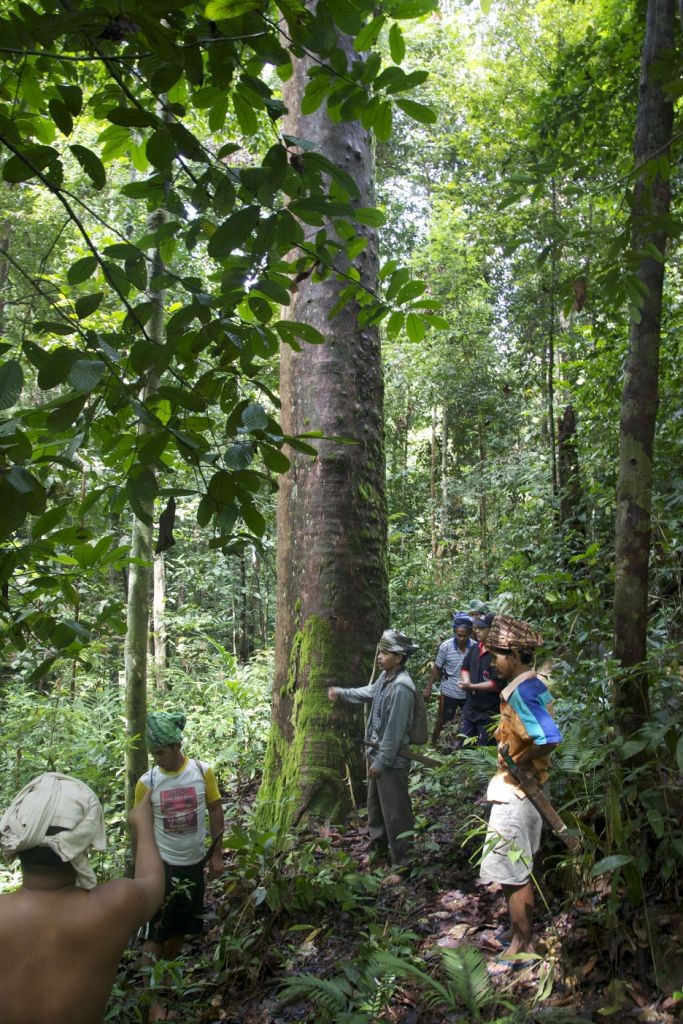 Take forests, for a starting point. It’s fairly widely understood that forests are increasingly impacted by climate change and have a key role to play in its mitigation – but after that most people get sketchy on the detail.

The impact of climate change on the world’s forests is likely to be severe, particularly where it begins to affect which tree and plant species can withstand a warming environment and which will falter. Forests are a microcosm of interdependence and changes in biodiversity can have huge and far-reaching consequences, changing tree pollination and animal relationships.

Such major changes to a previously stable environment have knock-on effects of their own, worsening the damage done to a biosphere through altered weather events and even by selective logging. It’s a short step to see that change hitting forest communities as they’re beset by flooding on the one hand and ever-scarcer resources on the other, leading to conflict, human rights issues and eventually displacement.

With an understanding that this delicate, multi-faceted balance is already under pressure, the notion that we can fix the climate by shifting to biofuels begins to make a lot less sense, given that biofuel production often means clearing forests to make way for monoculture plantations.

By the same token, the notion that we can plant our way out of the crisis with new single-species forests also looks increasingly absurd, especially when such a strategy effectively sacrifices the biodiversity which has evolved over millions of years.

We really don’t need to be desperately searching for a new kind of carbon-capture technology because nature’s already provided it – natural forests. 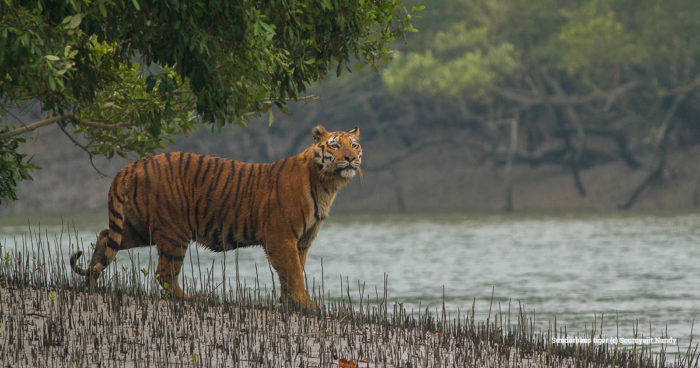 A tiger in the Sundarbans (c) Soumyajit Nandy

A real solution, then, is to stop the massive exploitation of the world’s remaining forests and so keep all that locked-in carbon locked in, while maintaining the environment in harmony with its human and animal occupants.

Animal life everywhere is hanging in the balance too, especially those species already endangered by human activities such as hunting and poaching for illegal trade; what price the future of tigers when the Sundarbans are threatened by sea level rise and, elsewhere, their prey base becomes unpredictable due to climate change?

A warming world will only compound the loss of animal habitat, displacing human communities into vulnerable forest areas and causing more interaction and conflict between people and wildlife.

The temperature changes alone will increase the spread of disease, further reducing biodiversity, and ultimately leading to ecosystem collapse. 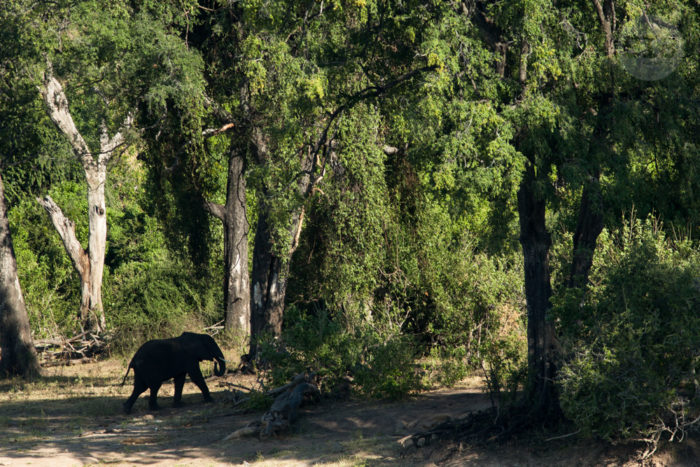 Elephants have a vital role to play for forests (c) EIAimage

Again, a key solution is preservation not innovation – we need to safeguard what we have because it all has a role to play.

We need to protect elephants from human depredation because they play a crucial role in foresting their environments, consuming seeds in once location before wandering to another and depositing them in dung.

Likewise, we need to protect tigers because, as apex predators, they’re indicative of the health of their environments; to protect tigers, we must protect the forests in which they live, not ravage them for short-term financial gain by mining them, driving roads through them or turning them over for agriculture.

As important as the world’s forests is the ocean, already suffering from  increasing acidification, warming sea temperatures and coral bleaching.

These huge changes are already destabilising everything from rising sea levels and whale migration patterns to the core food chain on which all interconnected oceans life depends.

Humans seem to be doing their damnedest to dramatically worsen the situation, exploiting the marine environment for fossil fuels, over-fishing and using the ocean as a dumping ground for our sewage, our trash and, especially important, an endless and growing stream of plastic pollution, the latter likely to increase as the fossil fuel industry moves away from fuel production towards plastics. 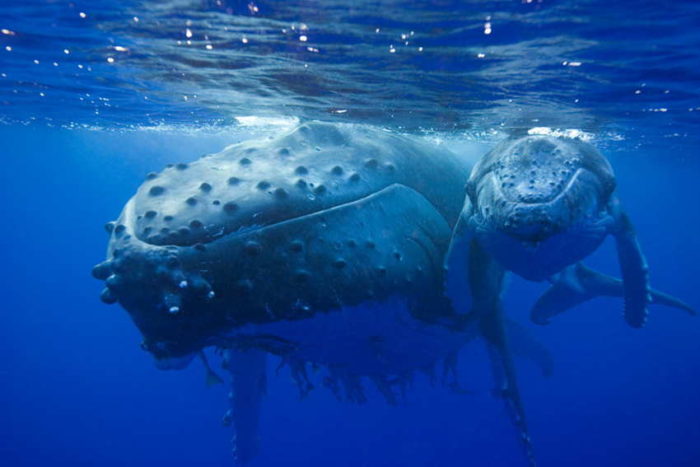 Yet science now tells us how essential healthy oceans are for the planet and its climate; for instance, whales help sustain the entire living system of the ocean – every time they defecate, the huge faecal plooms nourish plant plankton, which in turn removes carbon dioxide from the atmosphere and stores it at the bottom of the oceans while also serving as a major food source for fish.

We don’t even need to do anything to the oceans – we just need to leave them alone and stop treating them as a combined larder and dumpster.

What humans do need to do is to grasp the concept that life on Earth is all one thing and that to mess with one part of it is to mess with it all.

If we can rein ourselves in and begin to leave the natural world alone instead of exploiting and despoiling it, our blue and green life support system will have a much better change of withstanding the assault of a warming climate.

Greta’s emotional message to world leaders, and to the world at large, to do something before it’s too late, isn’t particularly complicated – they, and we, need only to listen to her and to act.

Let’s make sure she’s not a lone voice in the devastated wilderness she’s warning us might be lying in wait. 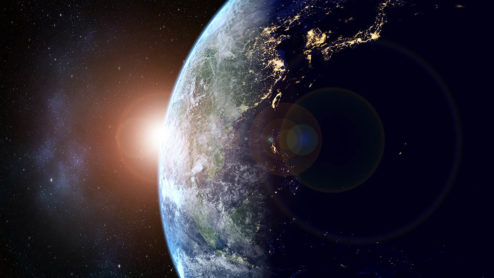