I spent last week in Canada attending one of the regular meetings of the Montreal Protocol’s Multilateral Fund (MLF), the body established to help developing countries meet their commitments under the global ozone treaty.

The Montreal Protocol celebrates its 25th anniversary this September and the MLF’s Executive Committee meets two to three times a year, so this latest meeting its 66th. This means that some of the longer-serving members of the Secretariat have spent more than a year of their lives shepherding negotiations about how to spend the money pledged by donor countries to phase out ozone depleting substances (ODS) in the developing world. Funding is pledged for a three-year period, or ‘triennium’. 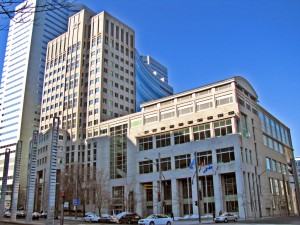 Last year, the donors, which include the US, Canada, Japan, the European Union and Australia, agreed to put up $450 million for the period from 2012-2014 – a fairly paltry sum when you consider the immense benefits the Montreal Protocol has secured, and will hopefully continue to secure, both in terms of ozone protection and putting a brake on global warming (as those of you who follow these things will know, ODS are also powerful global warming agents).

For the uninitiated, these meetings can be pretty impenetrable. In addition to all the ceremonial language characteristic of UN negotiations, the substance of what is being discussed is extremely technical and acronym-heavy. Most of the current action revolves around discussion of developing countries’ plans to phase out hydrochlorofluorocarbons (HCFCs). HCFCs are what replaced chlorofluorocarbons (CFCs) in most applications related to refrigeration and air-conditioning after the world woke up to the impending ozone catastrophe in the 1980s and ’90s. Although less harmful than CFCs, they were always meant to be an interim solution. In 2007, when it was clear that the climate impact of rapidly expanding use of HCFCs would be huge, the Montreal Protocol agreed to accelerate their phase-out. Which is where we’re at today. The challenge we’re now faced with is to ensure that instead of transitioning to yet another interim solution in the shape of a third generation of fluorinated gases, developing countries choose genuinely sustainable alternatives that pose no threat to the ozone layer and, crucially, do not accelerate climate change.

Looking at the choices the developed world has already made, this is far from being a foregone conclusion. Countries such as the US and the EU’s Member States have overwhelmingly chosen to replace HCFCs with high-global-warming-potential (GWP) hydrofluorocarbons (HFCs), chemicals which do not harm the ozone layer but which are super greenhouse gases with GWPs hundreds to thousands of times greater than carbon dioxide. However, there are encouraging signs that developing countries are bucking the trend set by donor states. At last July’s MLF meeting, for example, China – which is the world’s largest producer, consumer and exporter of HCFCs – was granted a whopping $265 million towards its HCFC phase-out. Most of that money will be used to fund conversions to “low-GWP alternatives” (ie, not the dreaded HFCs).

Decisions at last week’s meeting in Montreal followed that trend, with India, also a major producer and consumer of HCFCs, receiving just over $23 million to make the switch to similar low-GWP technologies. EIA initially had reservations about part of India’s plan, which included the use of an HFC approximately 1,000 times more harmful to the climate than carbon dioxide. However, negotiations resulted in India going for a substance with a GWP close to zero.

In the same vein, Kuwait will be avoiding conversions to HFCs in the first stage of its phase-out, which is no mean feat given that some other Gulf countries still don’t seem to be able (or willing?) to kick the F-gas habit.

Another significant development was the rejection of Thailand’s plan which was, among other things, proposing to convert the country’s air-conditioner manufacturing sector to HFC-410A, a chemical approximately 2,000 times more potent than carbon dioxide!  HFC-410A has reared its ugly head in countless phase-out plans so far but it looks as if the tide has finally turned, with donor countries drawing a line in the sand once and for all.

So while not every decision was entirely to EIA’s liking – not all phase-out plans were HFC-free, by any means – we can see a clear trend in favour of low GWP refrigerants over dead-end super greenhouse gases.

With many developing countries set to experience exponential growth in their refrigeration and air-conditioning sectors during the coming  years, that can only be a very good thing.