The second week of the 19th Conference of the Parties (CoP19) to the United Nations Framework Convention on Climate Change (UNFCCC) begins today. 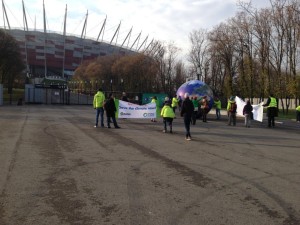 The CoP is an annual conference which brings together policy makers, scientists, NGOs, academics and, increasingly, business representatives to craft the rules governing the international climate regime.

It covers a staggering array of issues, organised around two central themes, namely the control of carbon dioxide (CO2) and other greenhouse gas emissions (referred to as “mitigation”) and actions taken to help communities and ecosystems cope with a changing climate (referred to as “adaptation”).

In recent years, as climate change has become a reality for many countries, an additional strand called “loss and damage” has emerged. The Climate and Development Knowledge Network (CDKN) defines loss and damage as the “climate change impacts that we are unable to prevent through mitigation and adaptation efforts”. Its relevance is highlighted by disasters such as Typhoon Haiyan, which ripped through The Philippines and other island states just over a week ago. Experts have already drawn a connection between climate change and this weather event of unprecedented magnitude, which has killed thousands and flattened entire towns and communities.

This year, the CoP is taking place in Warsaw, Poland, a country infamous for its reliance on coal. As scientists, and even traditionally conservative organisations such as the International Energy Agency, have repeatedly warned, fossil fuels need to remain in the ground if we are to have any chance of arresting dangerous climate change. It’s certainly hard to see how Poland’s enthusiasm for the black stuff tallies with its claim to “care” about the planet (“I care” is the conference slogan). The decision to hold CoP19 in Warsaw was controversial from the outset, not just because of Poland’s love of coal but also because of the privileged access big business has had to proceedings; from the preparatory pre-CoP, which excluded civil society, to the corporate branding of the conference, a first in the history of the UNFCCC. 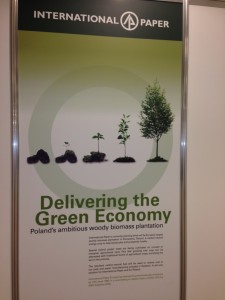 Corporate ‘partners’ of this year’s climate conference include:

To put it mildly, this has not created optimal conditions for reaching agreement on the defining issue of our time. Shocking announcements from both Australia and Japan that they were dramatically scaling back national policies to cut greenhouse gases have certainly done nothing to improve levels of trust between countries here in Warsaw. Among other things, it has added grist to the mill of developing countries, who believe that rich nations are not showing enough ambition when it comes to reducing their domestic emissions or providing sufficient funding to help poor countries do the same. 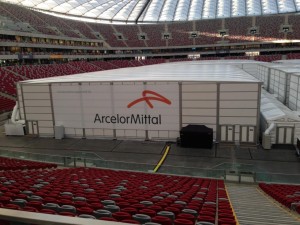 Arguments about “historic responsibility”, referring to the fact that much of the CO2 in the atmosphere today is the result of industrial development in the West and should therefore be dealt with by the responsible parties, have dogged these talks since the beginning and this year’s CoP is no exception. EIA certainly agrees that developed nations should lead the charge, and that developing countries should be given some lead-in time to make the necessary emissions cuts. Interestingly, this is the very approach adopted by the Montreal Protocol, which made developed countries go first when the international community took action to phase out ozone-depleting substances. In addition to this, developed countries have provided developing countries with money to implement the phase-out through contributions administered by the Montreal Protocol’s Multilateral Fund. The Montreal Protocol is widely hailed as the world’s most successful environmental treaty and is therefore a model worth examining in the context of the current climate negotiations; in fact, I’ll be giving a presentation on this very subject here later this week.

Although the Montreal Protocol has been a success in terms of phasing out ozone depleting substances, it has also led to the ‘phase-in’ of a family of very potent greenhouse gases called hydrofluorocarbons (HFCs). Their contribution to climate forcing is still relatively small but expected to soar in the coming decades, with emissions predicted to reach 5.5-8.8 gigatonnes (Gts) of CO2-equivalent emissions (GtCO2e) per year in 2050, equivalent to 9-19 per cent of projected global CO2 emissions under a business-as-usual scenario. Global action to eliminate these super greenhouse gases is therefore imperative.

As I’ve written in the past, action on HFCs is one of the initiatives being considered as a way to bridge the pre-2020 ‘emissions gap’, which currently stands at 6-12 gigatonnes of CO2-equivalent. Moves to phase down HFCs under the Montreal Protocol are currently being held up by a tiny handful of countries, led by India whose powerful chemical industry unfortunately seems to have the ear of the Government.

The reason we’re here in Warsaw is to try and unblock the log jam by pushing for a signal from the UNFCCC that HFCs should be dealt with under the Montreal Protocol. From our perspective it’s a no-brainer: a phase-out of HFCs would respect the notion that developed countries should move first, with all the pre-2020 mitigation efforts being placed firmly in the lap of the developed countries. What is more, to date most of the growth in HFC production and consumption has taken place in developed countries, so if Parties move now then developing countries will avoid being locked in to these dead-end chemicals in the coming years and thereby will largely avoid having to phase them out.

The global elimination of HFCs is one action which would buy the international community time to secure meaningful and legally binding commitments to slash carbon emissions before climate change spirals out of control.

A worldwide phase-out of HFCs will prevent over 100 gigatonnes of CO2-equivalent emissions reaching the atmosphere by 2050. There is simply no other comparable near-term strategy for greenhouse gas mitigation out there.