After a busy week of working groups and a broad range of discussions on issues relating to the conservation, welfare and management of whales, dolphins and porpoises, the 65th Meeting of the International Whaling Commission opened yesterday (Monday) in the lovely town of Portorož, Slovenia.

EIA arrived with a new report on Iceland’s whaling, Slayed in Iceland, launched jointly with Animal Welfare Institute (AWI) and Whale and Dolphin Conservation. The report documents Iceland’s ongoing contravention of two international conventions in its pursuit of commercial hunting of the endangered fin whale and its efforts to escalate exports of whale products to Japan. We were delighted to see Governments stand up to Iceland, with the EU leading a démarche of 35 countries expressing extreme concern about Icelandic whaling which was delivered to the Government of Iceland yesterday morning.

We appreciated UK Minister George Eustice attending the IWC meeting, confirming the UK Government’s strong commitment to the conservation and welfare of whales. It was gratifying to discuss his sincere concern about Iceland’s unacceptable slaughter and trade in whales.

The first major decision was taken on Greenland’s controversial aboriginal subsistence whaling quotas, which were granted after a vote amid strong statements of concern about the commercial aspects of the whaling. 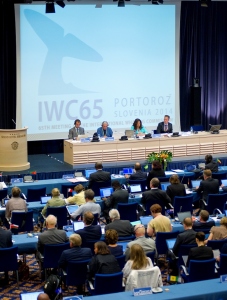 IWC65 gets under way in Slovenia

There was some discussion about the South Atlantic whale sanctuary proposed by Latin American and African countries and opposed by the usual pro-whaling suspects. The agenda item is still open. Meanwhile, Japan, for about the 28th year, requested a coastal whaling quota, this time for 17 minke whales. Several countries spoke out in favour including Norway, Iceland and the Russian Federation; however, it was strongly condemned, by Australia and New Zealand in particular and backed by the EU member states and Latin Americans, as an attempt to lift the commercial whaling moratorium,. The decision now rests with Japan as to whether it wants to submit the proposal to a vote, which would require a three-quarters majority.

We are also sharing our report Toxic Catch with IWC member Governments, which as the first pod of dolphins was killed in Taiji today puts a timely spotlight on the serious concern expressed by the IWC Scientific Committee regarding the status of Japanese small cetacean populations exploited in these hunts.

To round off the day we had a dinner hosted by the Slovenian Government, a chance to continue difficult discussions but also to enjoy the company of our IWC colleagues from around the world.