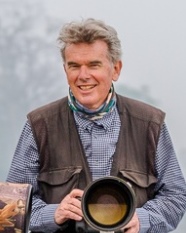 Photographer Michael Vickers is a long-standing supporter and friend of EIA – if you’ve followed our Tiger Campaign in recent years, you can’t have failed to see his beautiful images of these amazing big cats, which he generously allows us to use free of charge to help promote our work. In a special guest blog today, Michael talks about his passion for tigers and shares a few stories from the field.

For many years I have had a keen interest in felines and my home in England was never without a pet cat.

About 14 years ago, I happened to see an advertisement in a magazine advertising a wildlife trip to India specifically to find wild tigers. That was the beginning and with my wife, Annie, I travelled to the tiger reserves of Panna, Bandhavgarh and Kanha. 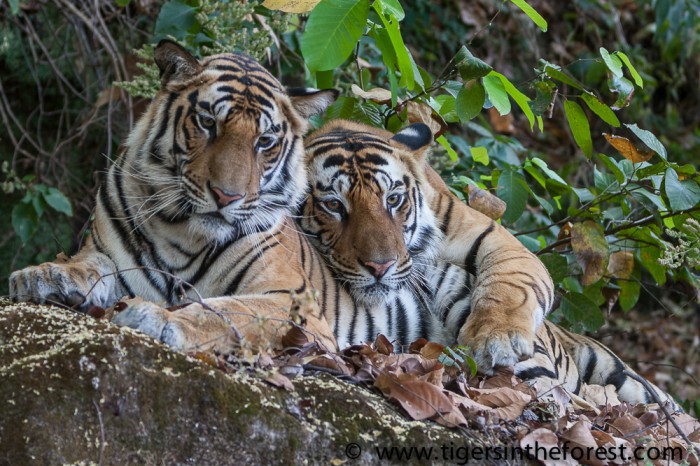 I can clearly remember my first sighting of a wild tiger, Sundar or B2 as he was known. He roamed Bandhavgarh’s forest in Madhya Pradesh. We found him resting in a nala (a dried out river bed) after consuming the remains of a deer, having made a successful kill. After so many years of reading about wild tigers, actually seeing this animal in its natural environment was incredibly moving.

Since that first visit to India, I have returned regularly every year to various different national parks. During this time I have experienced a number of memorable moments. Almost falling off an elephant that was startled by a tigress hidden by the undergrowth was one such occasion! Clutching on to the howdah (seat), I managed to remain on board!

On another occasion, at Bandhavgarh, during a hot afternoon my elephant had been following a tigress and her two male cubs to caves deep in the forest. The elephant waited patiently for the tigers to reappear while breaking off a small branch hanging over the caves. The noise disturbed the two sub-adult tigers, which leapt about four meters to a ledge above the cave, incredibly near to me! Although a frightening experience, it allowed me to take some wonderful photographs of the ‘two boys’ as they settled down together (see image above), with one tiger placing his huge paw across the shoulder of his sibling. 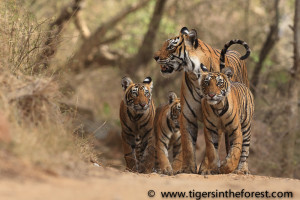 At Ranthambhore tiger reserve, my jeep was being driven up a track along the deep ravine known as Nalghati. Walking towards us was Ranthambhore’s well-known tigress Machali, together with her three female cubs. My driver continued to carefully reverse our vehicle, thus allowing the tiger family to continue their journey down the ravine and I had the opportunity to photograph the tigers as they appeared around each bend of the track. Eventually, the family left the track and made their way down to side of the gorge leading to the stream below.

Interestingly, all three cubs in the picture have since produced cubs of their own, although sadly one of the females known as T.17 or Sundari has vanished and is presumed to be dead. However, her three cubs (two male and one female) continue to thrive (below is a photograph of two of her cubs taken last month).. 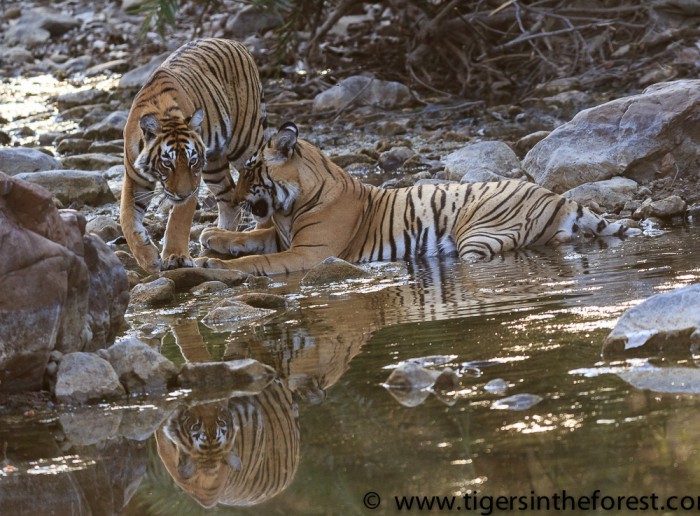 My wildlife photography has taken me to a number of interesting places, such as The Pantanal in Brazil where I spent time last year photographing jaguars from the water. Photographs from many of my journeys can be seen at my website.

I would be happy to furnish details to any EIA supporter interested in travelling to the tiger reserves of India and can be contacted through my website.

Finally I would like to offer my continued support to EIA for the wonderful work they carry out on behalf of wildlife, not only in connection with tigers but also in other important fields of environmental studies and conservation work.