LONDON: Internet marketplace giant Amazon.com is today called on to stop supporting commercial whaling by immediately and permanently banning the sale of all products from whales, dolphins and porpoises (collectively known as ’cetaceans’). 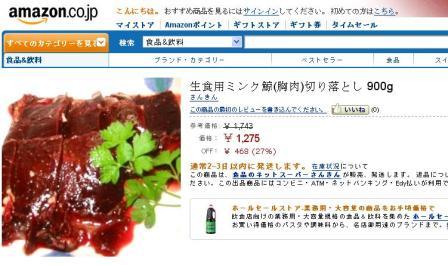 • “Minke whales to be eaten raw”, for sale on Amazon Japan

In December 2011, 147 whale products were found for sale on Amazon Japan. The listed products included fin, sei, minke and Bryde’s whales, all protected by the International Whaling Commission’s moratorium on commercial whaling and the Convention on International Trade in Endangered Species (CITES), which forbids international trade. Despite this, several companies were selling endangered fin whale imported from Iceland.

Amazon Japan was also selling pilot whale and other whale or dolphin species from the infamous Taiji drive hunts, highlighted in the Oscar-winning film The Cove.

“Amazon is selling threatened and endangered cetacean species that are protected by two international treaties,” said EIA Senior Campaigner Clare Perry. “By allowing vendors to sell whale products on its sites, it is effectively helping to prop up an unsustainable trade that should have been consigned to the history books long ago.”

EIA investigators purchased eight whale products from Amazon Japan in 2011, including canned whale meat, whale jerky, whale bacon and whale stew. Analysis revealed six of them to have mercury levels exceeding the Japanese national limit for mercury in seafood of 0.4 parts per million (ppm) and one had a staggering mercury level of 20ppm, about 50 times the safe limit.

“Amazon says ‘we’re constantly looking for ways to further reduce our environmental impact’ – banning these harmful products is an easy way for Amazon to show genuine commitment to this principle, while protecting its customers,” added Perry.

One-third of the 147 products were not listed with a species name, contrary to the requirements of Japan’s labelling laws. Since many of these products originate from Taiji, where 10 times more dolphins are killed than whales, it is likely Amazon Japan is selling dolphin products mislabelled as ‘whale’.

Mark Jones, veterinarian and Executive Director of Humane Society International UK, said: “There is no humane way to kill whales, so the creatures slaughtered to produce the food products being sold by Amazon will have endured a bloody and painful death. Killing these remarkable giants of the sea for commercial gain is condemned by the majority of the world’s nations. As a global brand, Amazon must now act to protect both consumers from environmentally polluted products and cetaceans from the cruel exploitation of commercial whaling.”

Interviews, images and the full report are available on request from:
• Clare Perry, EIA Senior Campaigner, via clareperry@eia-international.org or telephone +34 664348821
• Wendy Higgins, HSI EU Communications Director, via whiggins@hsi.org or telephone +44 (0)7989 972 423

1. The Environmental Investigation Agency (EIA) investigates and campaigns against environmental crime and abuses.

2. Humane Society International and its partner organisations together constitute one of the world’s largest animal protection organisations — backed by 11 million people. For nearly 20 years, HSI has been fighting for the protection of all animals through advocacy, education, and hands-on programs. Visit HSI’s website here.

3. Founded by Jeff Bezos in 1995, Amazon.com has its HQ in Seattle, USA, and has established subsidiary retail websites in the UK, Canada, China, Germany, Italy, Japan and Spain.