Today, we release a new briefing highlighting serious violations of the Convention on International Trade in Endangered Species (CITES) by the Government of Vietnam, as evidenced in a formal submission from the Government of Cambodia.

Specifically, Cambodia’s submission describes how the trees were harvested illegally and imported into Vietnam under fake CITES permits “notwithstanding that they [Vietnam’s CITES Management Authority] had been previously informed on several occasions of the illegality of those permits”. 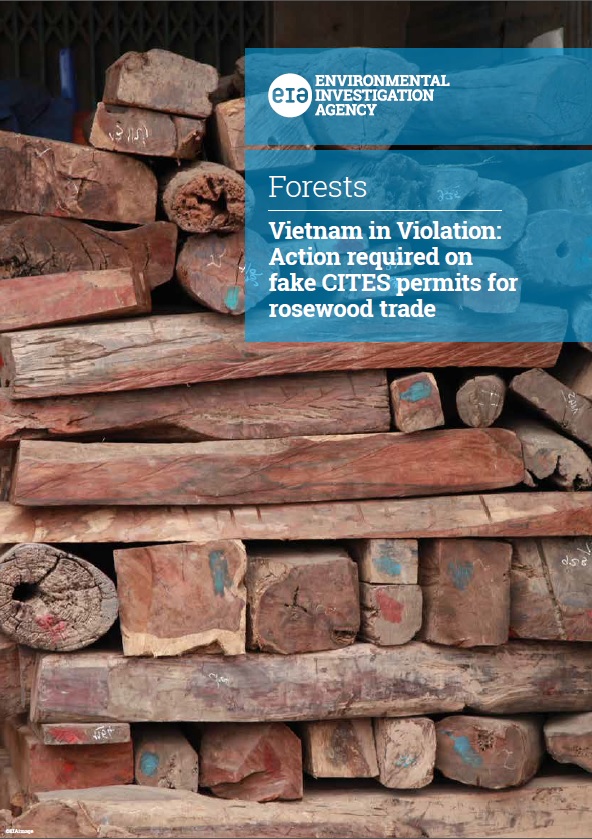 EIA analysis reveals that Vietnam then illegitimately issued its own CITES permits based on the known fake Cambodian permits, to authorise re-exports of much of the Siamese rosewood to China where it is in demand for the production of high-end Hongmu furniture.

While CITES is classifying these shipments as “illegal trade” outside of its scope to address, Cambodia’s submission makes clear that Vietnam’s CITES Management Authority knowingly and cynically acted to violate the Convention by hiding behind fake permits, including specifically Article IV paragraphs 4 and 5 (a) and Resolutions in support of them.

We note with some concern that Vietnam’s CITES Management Authority is set to be the agency issuing licenses for ‘legal timber’ under an EU-Vietnam trade deal due to be signed later this year – raising significant apprehension as to the competency of this arrangement.

Forests Campaigner Vanessa Richardson said: “Accountability under CITES is urgently required to ensure Vietnam improves its administration of legal timber trade. EIA urges the CITES Standing Committee to include discussion of these violations at its 70th meeting in Sochi next week.”

Among the briefing’s recommendations, we urge that a trade suspension be placed on Vietnam for all exports or re-exports of all Dalbergia species.