EIA has received the sad news that Surjani Alloy, the leader of the Aliansi Masyarakat Adat Nusantara (AMAN, an independent organisation comprising indigenous communities from various parts of the Indonesia archipelago), in West Kalimantan, died suddenly on Saturday.

I have known and worked with Alloy for more than nine years and we have shared many campaign activities in that time. But it was in 2009 when Alloy visited Europe as part of a team from Indonesian civil society that his extraordinary compassion and diplomacy came shining through. 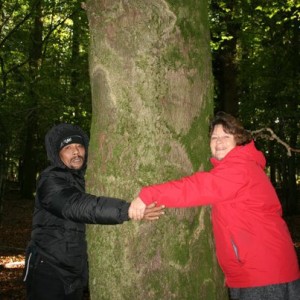 Surjani Alloy and Faith Doherty in The Ardennes, 2009

A team from EIA invited and travelled with Alloy and others from Indonesia to the forests in Belgium to make a film on the European Union’s FLEGT initiative. We laughed at the huge differences between the forests of the Ardennes and those of Kalimantan, but I remember that afternoon as a very happy time for all of us as I also discovered things I hadn’t known, Alloy’s sense of fun and wonder at nature opening my eyes to things I’d never taken the time to notice.

Alloy met with various decision-makers here in the UK, as well as at the European Commission. His ability to get along with so many different people, with their many and varied agendas, was testament to how he lived for the truth. The indigenous people of Indonesia were always uppermost on his mind and in his thinking. He worked with many different communities, knew many international activists and is held with great respect.

When Alloy visited my home he met and fell in love with my dog, Enya; he spoke to her in his language and she was immediately besotted. Right up until the last time I saw him, his first question was always “How’s Enya? I do miss her”. He was like that, always up front and personable. 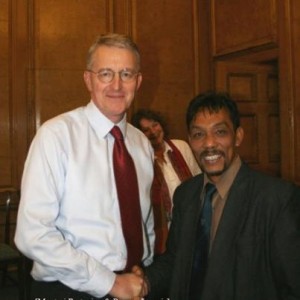 Alloy and his organisation AMAN returned our invitation and my colleague Jago and I went to Pontianak in 2010 to attend a workshop organised by Minang from Telapak on the FLEGT Voluntary Partnership Agreement (VPA). One afternoon, as everyone started to fade, Alloy got us all standing and encouraged everyone, from the very cool to the most un-hip, to participate in an exercise where we all ended up jumping and whooshing and being terribly silly. Later that evening, he took us to a long house where we sat and drank the local arak that went down so well with all of us, and we laughed so much and so hard long into the night, meeting so many of his friends from town.

The last time I saw Alloy, he had just returned from a conference in Thailand and we happened to be in Jakarta at the same time. Catching up over a meal of padang, we talked of another visit to West Kalimantan and plans to investigate recent news of illegal logging.

I remember his last words to me as we said goodbye and I will always remember Surjani Alloy as one of the best and brightest with whom I have ever had the privilege to work – but more importantly, he was my dear friend.