In summary, the briefing exposed how, on the very day Indonesia’s president signed a new moratorium on forest exploitation in areas of peatland and primary forest across Indonesia, EIA and Telapak were filming a Malaysian owned plantation company actively clearing about 5,000 hectares of it in the REDD+ Pilot Province, Central Kalimantan. The moratorium was breached on day one – hardly a good sign for what is already a weak moratorium. 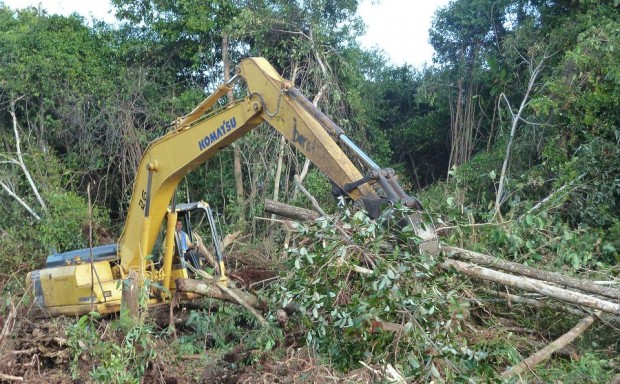 Worse still, EIA’s research also reveals that Norway, Indonesia’s biggest REDD+ donor, stands to profit from the illegal deforestation of moratorium land through the $41.5 million of shares the country’s pension fund holds in the Malaysian company Kuala Lumpur Kepong. This is despite both the moratorium and the REDD+ Pilot Province being cornerstones of a US$ 1 billion Letter of Intent (LoI) on REDD+ between the two countries. Read Jago’s previous piece on the Moratorium.

The briefing also reveals how this is not Norway’s only investment in deforestation in Indonesia. EIA’s research reveals that during 2010, Norway’s portfolio of logging and plantations investments had increased in value from $437 million to $678 million, with $145 of this increase being profits to Norway from increased share values.

EIA has repeatedly warned Norway that its Pension Fund is in danger of profiting from the violation of the forests of Indonesia, but, it seems, to no avail. Indeed, as the briefing explains, Norway has actually put more money into, and made more money from deforesting industries in Indonesia and its neighbouring countries over the year, than it has granted to Indonesia under the Letter of Intent on REDD+.

EIA and Telapak have submitted the briefing to the Indonesian and Norwegian authorities, in the hope that both parties might prevent the moratorium being swept aside by realities in crime riddled Central Kalimantan.

While Indonesia needs to deliver on its pledges to clean up crime, corruption and illegal plantations in Central Kalimantan and nationwide, Norway’s finance ministry needs to get its pension fund REDD Ready by divesting from companies that drive the very deforestation Norway is hoping to see reduce in Indonesia.

For further information on the breach of the moratorium, see the following resources:

News coverage on Reuters & Mongabay, and in REDD Montor