The world’s governments will gather in Panama in November for one of the biggest meetings in the environmental calendar – and EIA campaigners are primed and ready with key asks to protect endangered animals and timber species.

The 19th meeting of the Conference of the Parties (CoP19) to the Convention on International Trade in Endangered Species of Wild Fauna and Flora (CITES) will take place from 14-25 November in Panama City.

CITES is the only existing international agreement that regulates trade in wild animals and plants. 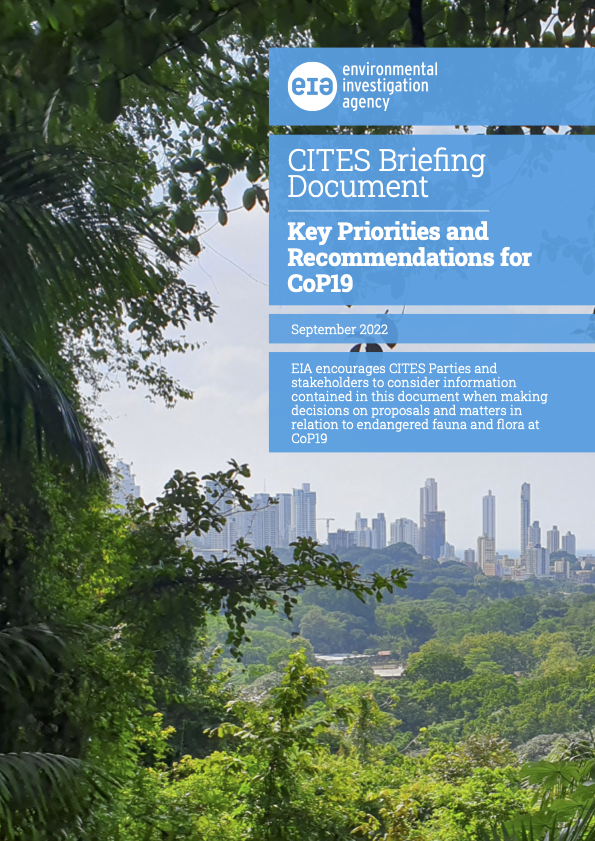 At CoP19, countries (known as Parties under CITES) are due to discuss hundreds of pressing trade-related conservation issues facing threatened species around the world.

EIA works to investigate and campaign against environmental crime and abuses and a major component of that work is to tackle illegal wildlife trade, predominately in species threatened with extinction, such as elephants, rhinos, tigers, pangolins and rosewood.

Our various campaign teams have analysed key agenda items up for discussion at CoP19 and have compiled detailed summaries of the issues while sharing our positions and recommendations to Parties.

A total of 91 agenda items are up for discussion in Panama City over the course of two weeks and our Wildlife and Forests teams will be working around the clock once the meeting opens to ensure that various procedural and species-specific issues are debated, introduced, reinforced or rejected.

Our overall aim is to ensure that decisions taken under CITES are robust, country-specific and time-bound to encourage Parties to abide by their responsibilities and commitments to protect endangered species from unsustainable trade.

At CoP19, EIA’s Wildlife Campaigners working on elephant and rhino protection will be calling for the rejections of several proposals that fail to address the risks of increased poaching and illegal trade in ivory and rhino horns in Southern Africa.

They will also work to promote better and more effective cooperation between various procedural and operational mechanisms under CITES to improve compliance and responses to illegal wildlife trade.

From their side, our Ocean Campaign will be seeking stronger action against illegal trade in totoaba fish in the Gulf of Mexico in an effort to ensure the survival of the almost-extinct vaquita porpoise which is being caught in illegal gillnets.

Our Wildlife campaigners will also be seeking greater enforcement support to West and Central African countries to tackle illegal wildlife trade in this region, recognised as a key hub in Africa.

Meanwhile, our Tiger campaigners will make strong efforts to ensure that long-overdue missions to countries with captive big cat facilities are prioritised, among other urgent interventions relating to illegal trade in Asian big cat parts and derivatives.

And our Pangolin campaigners will be focusing efforts on lobbying Parties to shut down domestic legal markets in consumer states such as China to reduce demand for pangolin scales and to protect the species in the wild.

From the Forests side, campaigners will be calling for several key species to be up-listed to either Appendix II or I to ensure greater protection from unsustainable trade under CITES.

Our full briefing, which outlines EIA’s specific asks and recommendations to Parties at CoP19, is now available to read online.

During the coming weeks, EIA will be publishing several CITES-related blog, podcasts and articles as well as coverage during the meeting direct from Panama City. 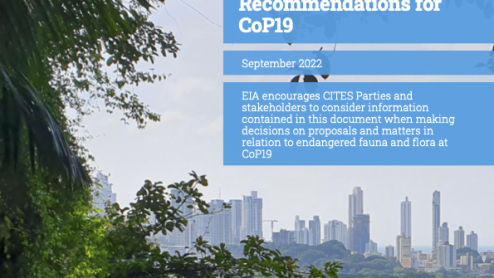