Today, we are proud to share a new report on the negative impacts of oil palm plantations on human rights and the environment in Myanmar.

AROUND the world, oil palm plantations have been criticised for forced evictions of indigenous communities, labour abuses and rampant deforestation. This notorious industry has now expanded to Myanmar with devastating consequences for human rights and the environment.

More than 1.8 million acres of oil palm concessions have been awarded in Tanintharyi region in the far south of the country, often to companies with close ties to the former military regime. Poor land use planning has allowed oil palm companies to clear cut High Conservation Value (HCV) forest, including globally important lowland rainforest. Furthermore, oil palm plantations have encroached on the customary territory of indigenous communities, causing land conflict and damaging livelihoods in contested areas affected by more than six decades of civil war. 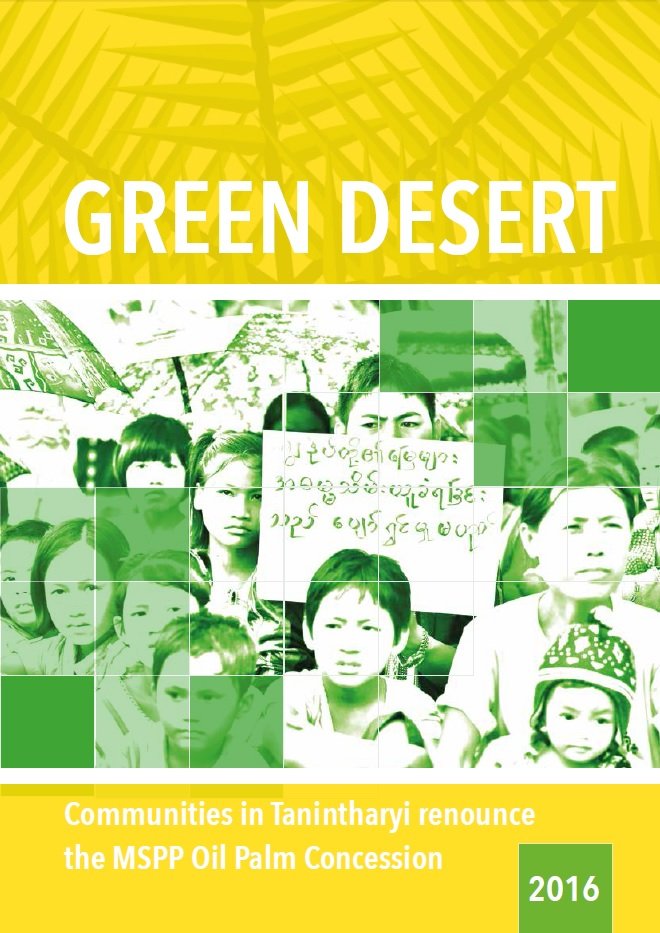 With foreign investment in Myanmar expected to increase following the country’s ongoing political transition, there is a serious risk that oil palm expansion will continue to fuel social and environmental harm in Tanintharyi region. This report aims to understand and highlight these risks. Based on 18 months of research by local civil society organisations, this report documents the impacts of oil palm in Myanmar, using the controversial Myanmar Stark Prestige Plantation (MSPP) project as a case study.

In 2011, MSPP was granted a permit by the Myanmar Investment Commission (MIC) to establish a 38,000-acre, $36.75 million oil palm project in Tanintharyi Township, Myeik District, Tanintharyi region of south-eastern Myanmar. The Karen National Union (KNU) administers this area as Ler Muh Lah Township, Mergui-Tavoy District. However, lack of transparency makes it difficult to determine the actual size of the concession area. A project signboard erected by MSPP in 2014 lists the concession area as 42,200 acres, while a company map from 2015 shows a concession boundary measuring 49,227 acres.

MSPP is a joint venture between Malaysia-based Prestige Platform, which owns a 95 per cent stake, and Myanmar-based Stark Industries, which owns a five per cent stake. Stark Industries is owned and founded by Mya Thida Sway Tin, a Myanmar businesswoman with connections to military and business elites. Prestige Platform is a subsidiary of Glenealy Plantations which, in turn, is a subsidiary of Samling Group, a Malaysian conglomerate. Samling Group and Glenealy Plantations have deplorable reputations and have been decried for environmental crimes and human rights violations. Their MSPP project is financed by Maybank, a Malaysian commercial bank that has issued $124 million in bonds to Glenealy Plantations. Maybank itself is financed by several international entities, including the Japan Bank for International Cooperation (JBIC), Norwegian Government Pension Fund Global (GPFG) managed by Norges Bank Investment Management (NBIM) and eight other European and North American pension funds.

The MSPP oil palm project is located in an area that has seen more than six decades of civil war between Myanmar’s central Government and the Karen National Union (KNU). Myanmar military offensives have forced indigenous Karen villagers to flee their homes multiple times, hiding out in the forest or refugee camps in Thailand. Between 1997 and 2007, the Myanmar Army committed many human rights violations in the MSPP area, including looting and destruction of property, forced labour, rape, torture and arbitrary killing of civilians. In 2012, the KNU signed a preliminary, bilateral ceasefire agreement with Myanmar’s central Government, which opened up former civil war zones to foreign investment. The villages around MSPP are under mixed administration by both the Myanmar Government and the KNU, which leaves civilians vulnerable to abuse as both shift the blame for the oil palm plantation’s impact..

.Many of the problems resulting from MSPP activities arise from poor Government land use planning that failed to reflect reality on the ground. Due to civil war and displacement, indigenous Karen villagers have never been able to register their lands with either the Myanmar Government or the KNU, leaving them vulnerable to dispossession. The MSPP concession overlaps with 38,900 acres of community and agricultural lands belonging to four villages, which were incorrectly classified as ‘vacant land’ by the central Government. The MSPP concession also overlaps with the proposed boundary of Tanintharyi National Park, allowing the company to destroy forest in an area of high biodiversity and important tiger habitat.

MSPP activities have caused severe negative social and environmental impacts for four indigenous Karen villages, home to approximately 4,480 people within the concession area, and in total 13 villages are affected. Since 2011, the company has cleared more than 6,000 acres, including the betel nut and cashew orchards villagers depend on for their livelihoods. Families who have lost their productive land have fallen into high levels of debt or been forced to work as day labourers for low wages. Many villagers do not earn enough money to feed and clothe their families. Furthermore, run-off from chemical fertilizers and pesticides used by MSPP has polluted local water sources, causing livestock to die and villagers to fall ill with skin irritations and dysentery. MSPP has never offered villagers fair compensation for these impacts. 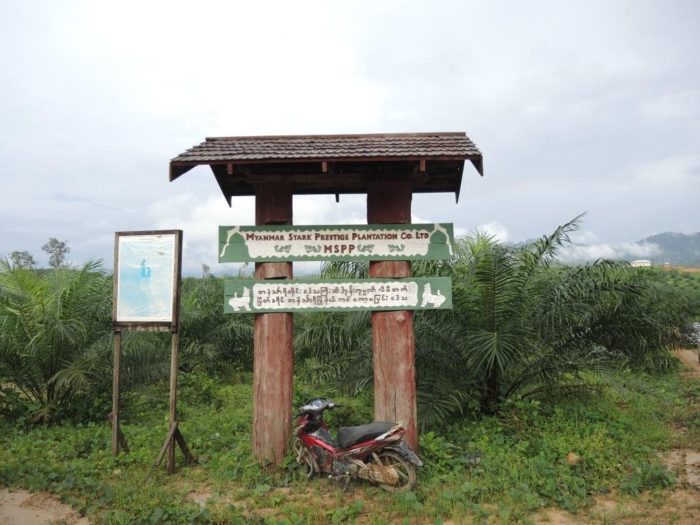 The MSPP oil palm project has failed to comply with both domestic law and international human rights principles. Following the granting of the MIC permit, MSPP should have acquired permission from the Central Committee for the Management of Vacant, Fallow and Virgin Lands to use the relevant land. There is no evidence that it did so. Further, because the land belonged to the communities, the only way that it could have been acquired is under the 1894 Land Acquisition Act. This would have required a public notification process and opportunities to raise objection, neither of which took place. MSPP has also violated the indigenous Karen community’s right to Free Prior and Informed Consent (FPIC) enshrined in the United Nations Declaration on the Rights of Indigenous Peoples (UNDRIP).

In July 2016, the Tanintharyi Joint Monitoring Committee (JMC), a body tasked with monitoring complaints in the ceasefire region, discussed the issue of MSPP following a request by the impacted community. Based on the decision at this meeting, the Tanintharyi Township Police office then sent a letter to MSPP requesting that operations be temporarily suspended until the company can properly negotiate with villagers to resolve the land dispute. After more than a year-and-a-half of protests and complaints, this suspension represents a crucial opportunity to implement long-term solutions to the problems caused by the MSPP oil palm project.

The case of MSPP clearly highlights the environmental and social risks of oil palm expansion in Myanmar. As such, this report advocates that the Government of Myanmar not only resolves disputes around MSPP but also addresses the entire oil palm sector. The Government should place a moratorium on oil palm expansion and new concessions until appropriate safeguards are put in place to guarantee human rights and environmental protection.

This report also demonstrates the high risks of large-scale investment in conflict areas, where administration is mixed between the Union level Government and ethnic armed organisations, and governance is very weak. In these areas, ethnic communities have not been able to register land due to civil war and have no land tenure security.

A moratorium should be placed on large-scale investment in conflict areas until there are strong governance mechanisms in place and an inclusive and meaningful peace accord.