Monitoring of key crossing points along the Myanmar-China border by the Environmental Investigation Agency (EIA) reveals a sharp downturn in the volume of illegal timber being smuggled between the two countries during the past six months. 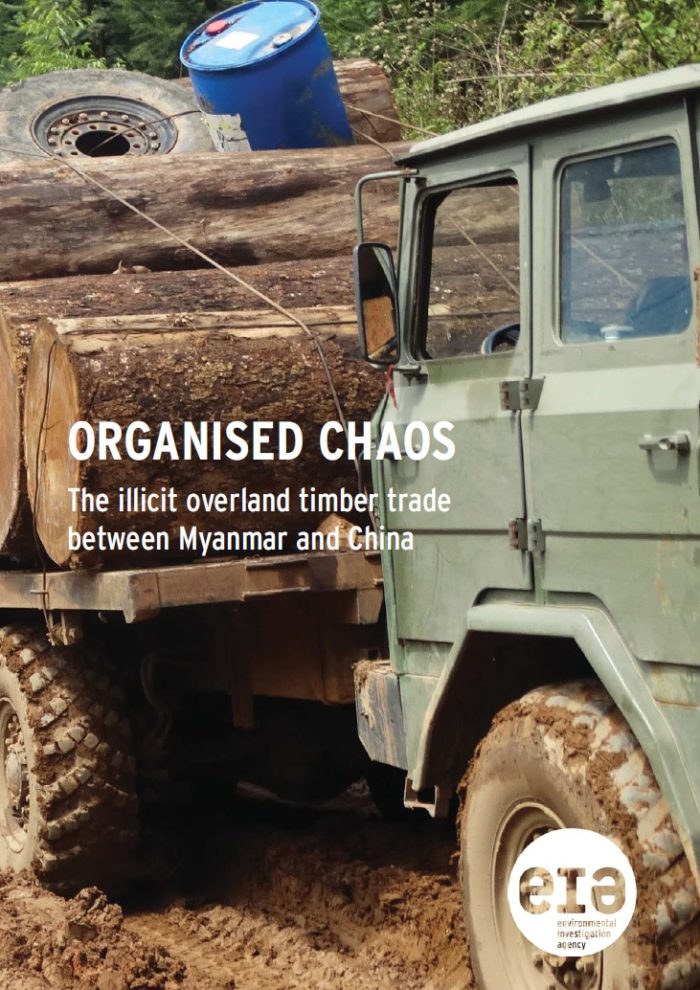 In September 2015, EIA released the report Organised Chaos, which documented surging illicit trade in logs via the land border between Myanmar’s Kachin State and China’s Yunnan Province, reaching 900,000 m3 of wood in 2014, worth almost half a billion dollars.

The report exposed how powerful business syndicates were colluding with the Burmese military and ethnic political groups to violate Myanmar’s forest laws, which ban overland trade in timber and the export of raw logs. It also highlighted the case of 155 Chinese labourers arrested by the Burmese military in January 2015 at a logging site inside Kachin. The Chinese nationals were initially sentenced to life imprisonment, leading to diplomatic tension between the two countries and a subsequent presidential pardon for the loggers.

Field observations by EIA since the report launch indicate that the flow of timber across the border has fallen dramatically. One year ago, EIA documented long lines of trucks queuing to carry valuable logs across the border. This year only small amounts of precious woods are being smuggled via backroads on motorbikes or passenger vehicles.

At the N’bapa-Banling unofficial crossing, controlled by a major syndicate called BDYA and one of the busiest routes last year, the trade has come to a virtual halt. Further north at the Kambaiti-Houqiao official border point, the same situation was observed.

Most of the arrested Chinese loggers come from Houqiao and upon their return home after being released last July they were told by local authorities not to return to Myanmar for the rest of the year. Many also lost money when their trucks and equipment were confiscated and will not risk crossing the border again. In the border town of Pianma, in northern Yunnan, previously a major storage area for logs cut from the unique forests of north Kachin, local sources said no new logs had been seen for months, leading to the closure of some of the town’s sawmills.

A combination of factors is likely responsible for the timber smuggling slowdown. EIA’s report, coupled with the publicity over the 155 Chinese loggers, brought significant political attention to the problem. In addition, the huge volumes of timber which flowed across the border over the past few years created a glut in the market, especially in valuable rosewood species, the price of which had fallen. When EIA visited the key log storage areas of Ruili and Nongdao in southern Yunnan last July, large stockpiles of rosewood and teak were seen, with many of the rosewood stocks dating from 2014. Other contributory factors include the economic slowdown in China and Myanmar’s General Election last November.

Faith Doherty, Team Leader of EIA’s Forest Campaign, said: “The sharp fall in timber volumes being smuggled into China provides a much-needed breathing space for the precious forests of Myanmar.

“For too long, the authorities in both countries have turned a blind eye to this backdoor route for logs illegally cut in Myanmar to feed China’s massive wood-processing sector. What is needed now is for both countries to cooperate on achieving a permanent closure of the border to timber trade. An important first step would be for China to formally recognise its neighbour’s export ban on logs.”

Previous reductions in timber flows have proved temporary. After the trade reached one million m3 a year in 2005, the Yunnan provincial government largely halted the trade and issued regulations promising to only allow legal trade. By 2008, the volume had fallen to just 270,000 m3 a year but the reduction was not sustained and by 2014 trade had returned to peak levels.

During 2015 there were a series of bilateral discussions between forestry officials from Myanmar and China as a precursor to a planned Memorandum of Understanding, yet these meetings reveal divergent views. While Myanmar is calling for cooperation to stop the illegal timber trade, China’s stance is to promote legal trade, including proposals to set up timber trading and processing parks in Myanmar, a move which has so far been rebuffed by its neighbour.

Without formal measures to permanently halt timber trade across the border it could quickly resume once the log piles on the Chinese side of the border dwindle and timber prices rise again due to scarcity. One Chinese timber businessman, based in Pianma, has told the media he expected the local government to lift controls on timber imports in March.