The unexpected rise in emissions of CFC-11 was top of the agenda at the 40th Open Ended Working Group (OEWG) to the Montreal Protocol in Vienna..

In her opening remarks, Tina Birmpili of the Ozone Secretariat said it was “critical to take stock of the science and take action” and urged parties to “not relax their vigilance for a second” to maintain the success of the treaty.

Prior to the meeting, we released the findings of a new climate investigation in the report Blowing It, exposing the large-scale illegal use of ozone-destroying CFC-11 in foam-blowing industries in China.

The report was widely covered in the international press and discussed in the plenary, side meetings and corridors of the OEWG. We addressed all delegates during the meeting, stating: “It is clear from the discussions so far that none of us in this room need to be reminded that the significant quantities of CFC-11 in question here not only threaten our slowly healing ozone layer but also our climate..

“Equally importantly, this serious situation presents an opportunity to sustain and reinforce the hard-earned reputation of the Montreal Protocol as the most successful environmental treaty by taking swift and effective action.”

Governments put the issue at the top of the meeting’s agenda, unanimously urging a rapid and serious response. The Government of China stated it would cooperate and use the mechanism of the Montreal Protocol to discuss the matter in an “open, transparent and active” manner, use science to understand the sources of the emissions and take action to ensure the continued success of the treaty. 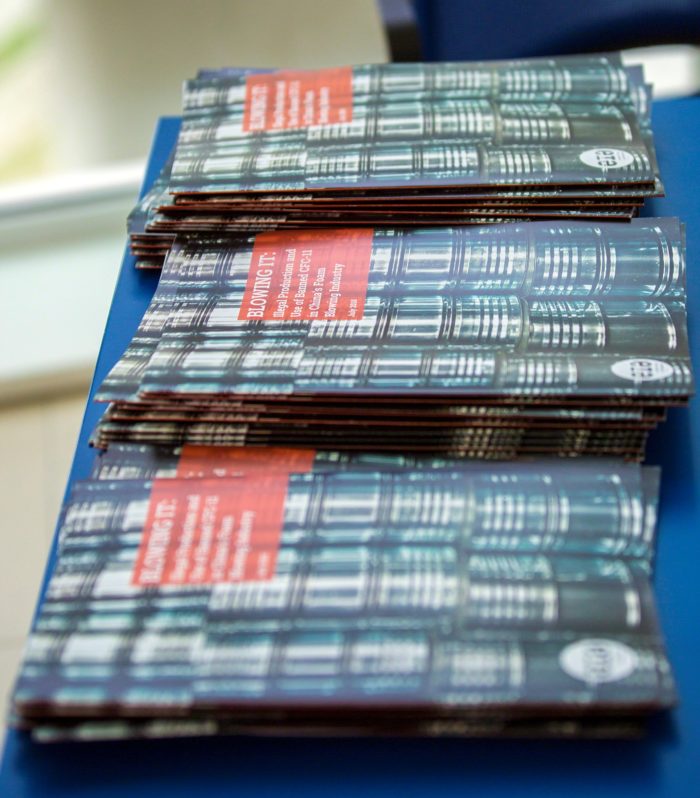 Our Blowing It report at the meeting (c) IISD

In a bilateral meeting, the Government of China assured our climate campaigners it was already taking steps to follow up on the information we had provided to China several weeks before the public launch of the report. The Government has yet to be convinced, however, that illegal use and production of CFC-11 is occurring in China on a scale large enough to account for the unexpected rise in emissions reported in Nature.

A record 60 parties co-sponsored a conference room paper on the CFC-11 emissions issue and the room was full for each of the contact group meetings during the week to discuss the best way forward. Concrete steps for the Montreal Protocol await the decision-making power of the Meeting of the Parties (MoP); however, additional scientific and technical information will be provided by the Protocol’s assessment panels to that meeting. It is hoped that data from additional monitoring sites in Japan, South Korea and China will also be forthcoming, to more accurately pinpoint the source of emissions.

The issue will be further discussed at the Ecuador MoP in November and we will continue to investigate this issue with a view to bringing further information to that meeting and to any countries involved in the illegal production and use of CFC-11.

Also on the agenda in Vienna were issues concerning data reporting, leap-frogging from hydrochlorofluorocarbons (HCFCs) to climate-friendly alternatives, nominations of Technology & Economic Assessment Panel (TEAP) senior experts, eligibility for financing and adjustments to the Protocol.

The OEWG meeting was preceded by a two-day workshop on energy efficiency. The hydrofluorocarbon (HFC) phase-down under the Kigali Amendment, which will come into force in January 2019, offers significant opportunities to reap additional climate benefits by enhancing the energy efficiency of the cooling sector.

The refrigerant used in a system is responsible for around 20-40 per cent of the climate impact while electricity usage makes up the remaining 60-80 per cent. It is therefore imperative to tackle them both simultaneously to create a sustainable and clean cooling sector.