EIA campaigners at the 65th meeting of the Standing Committee to the Convention on International Trade in Endangered Species (CITES) in Geneva have learnt that a key recommendation directed to the Hong Kong authorities to counter the illicit trade in Siamese rosewood has finally been accepted. 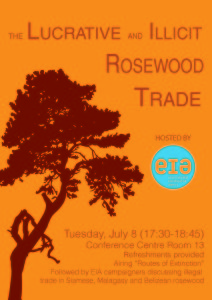 In an EIA-hosted event titled The Lucrative and Illicit Trade in Rosewood, the Hong Kong Management Authority announced that enactment of the legislation which will put into effect the amendments in Appendices I and II from the 16th Conference of Parties (CoP16) to CITES has been scheduled for November this year.

Parties to CITES are required to implement changes to appendices in their own legal systems within 90 days of them being accepted by the CoP. While Hong Kong authorities had announced that an 18-month delay would be applicable to the specific amendments made at CoP16, EIA had reported that traders were taking advantage of the lack of legislation and acting with impunity by trading in Hong Kong to evade CITES restrictions.

The international focus on Siamese rosewood has soared during the past few months as stocks dwindle in range countries. Prior to this week’s meeting, Thailand issued a formal Notification to the Parties calling for enhanced cooperation in the fight against the illegal trade in Siamese rosewood.

As further indication that the trade is at crisis point, Thailand last month came close to having the Dong Phayayen-Khao Yai Forest Complex added to the World Heritage Site’s ‘in-danger’ list, with illegal logging cited as a key catalyst.

Almost every day, EIA is alerted of rosewood seizures which have increased not only in frequency but also in the quantity of logs seized.

Although delayed, the latest announcement from the Hong Kong authorities is a welcome step towards stopping the trade in CITES Appendix II-listed species from slipping through international borders and also in the promotion of the regional cooperation urgently required to tackle this increasingly critical issue.