Many were angered and distressed by our coverage last week of the two most recent mass killings of pilot whales in the Faroe Islands and subsequently contacted us for guidance as to how best and most effectively protest the slaughter. 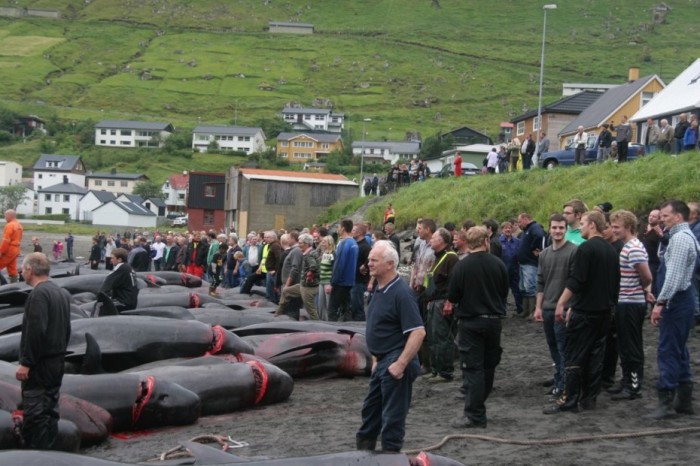 Slaughtered pilot whales on the beach (via www.nordlysid.fo)

.While there are a number of petitions regarding Farose whaling circulating on the internet, we believe that a direct protest to the Government of the Faroe Islands would have more impact.

The most appropriate state officials to contact regarding whaling on the Faroe Islands are the Prime Minister and the Minister of Fisheries; their respective postal and email addresses are: 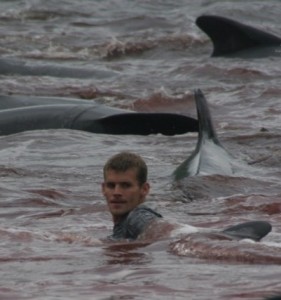 Faroe Islander in deep water as the pilot whales are herded to and stranded on the beach (via www.nordlysid.fo)

You can compose your own message to the Prime Minister and the Minister of Fisheries, or you can use/adapt the template letter we have provided below. In either case, we would urge that the content of all letters of protest be kept civil and respectful to ensure letters are taken seriously.

Reports of the Fuglafjørður kill in the Faroese media show chaotic scenes that must have subjected the individual whales to extreme distress, pain and suffering. It is unacceptable for a highly modern society to treat animals in this way.

I ask why the decision was made to allow the kills of such large numbers of whales to take place when historical evidence shows that it is highly likely that the whales will be exposed to unacceptable cruelty.

I understand that the Chief Medical Officer and Chief Scientist have issued a warning to people in the Faroe Islands not to eat pilot whale because of the significant threat to human health posed by the pollutants found in the meat and blubber. Why, therefore, are these hunts allowed to continue when the resulting products are a danger to consumers?

I urge you to listen to what your experts and the outside world are saying and end the hunting of pilot whales in the Faroe Islands.

You can find our more about EIA’s Cetaceans Campaign here. Many thanks for your continued support and actions.