It’s called the National Ivory Action Plan (NIAP) and was designed to improve elephants chances of survival from illegal killing.

Parties to CITES (Convention on International Trade in Endangered Species of Wild Fauna and Flora) are identified for inclusion in the NIAP if they have worrying levels of poaching and/or illegal ivory trade and are required to develop action plans to counter these criminal activities. 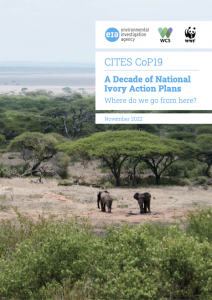 But the process has serious flaws which, rather than protecting dwindling elephant populations, threaten their long-term existence.The NIAP process was introduced in 2013, nearly a decade ago, and EIA, the World Wildlife Fund (WWF) and the Wildlife Conservation Society (WCS) have continuously raised the alarm that numerous procedural weaknesses were undermining it.

But now there is a chance to do something about it.

On the agenda for the 19th meeting of the Conference of the Parties to CITES (CoP19), being held in Panama City between 14-25 November 2022, is Document 66.7, submitted by Malawi, Senegal and the United States of America, calling for an urgent review of NIAP.

A new briefing document produced by EIA, WWF and WCS called ‘A Decade of National Ivory Action Plans: where do we go from here?’ – specifically prepared for the meeting – supports that call. It urges CITES decision-makers to agree to the proposed review and bring much-needed improvements to the NIAP process to ensure that responses to poaching and ivory trafficking remain robust and effective.

The joint briefing highlights the deficiencies in the current NIAP process and why there needs to be reform;

Furthermore, the paper suggests that new tools are needed to ensure the NIAP process remains fit for purpose and effective. EIA, WWF and WCS also want the urgent involvement of independent experts to assist with monitoring and evaluation of NIAP progress reports and recommends an expert advisory group be established for this purpose.

You can read our joint report here and keep up with the EIA team in Panama here. For more information about the array of issues EIA will be working on at CoP19, please see our CoP19 briefing.