It relies on sharp senses of smell and hearing to detect its favourite foods, ants and termites, slurping them up with its incredibly long, sticky tongue. When attacked, it protects itself by curling up into an armoured ball. 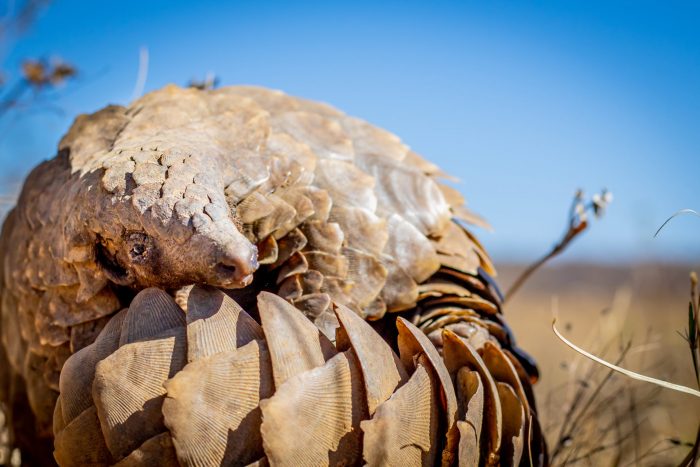 This is a pangolin. It’s shy, secretive and solitary. Sadly, it’s also the world’s most trafficked wild mammal: in the last 10 years, it’s believed that a million pangolins have been taken from the wild.

Why are pangolins being slaughtered?

Pangolins are hunted and killed for their scales, which are used in traditional Chinese medicine, both legally and illegally. Their meat is also considered a delicacy by some consumers in China and Vietnam.

There are eight species of pangolin, four native to Asia and four to Africa. As Asian pangolins disappear, wildlife criminals have moved on to African pangolins, killing them on an industrial scale, and sending their scales and meat to Asia.

All eight species are now at risk of extinction.

Through our undercover investigations and intelligence work, we are building up an end-to-end picture of how pangolins are trafficked from Africa to Asia, from the poachers on the ground to the shipping and customs agents, right through to the criminal kingpins who control the trade.

Going undercover can be dangerous, but our brave investigators are getting the information needed to expose the traffickers and make a difference.

Pangolin scales are often smuggled with other illegal products from endangered animals, including elephant ivory and rhino horn.

To protect our natural world, we need to challenge and disrupt these criminal networks wherever they operate.

Please help us tell world leaders to crack down on the illegal wildlife trade, and make sure the criminals involved are caught and punished.

Will you join us?

For too long, illegal trade in pangolins and other endangered wildlife has been a low priority for governments.

We want to see real progress, before it’s too late.

A crucial United Nations Biodiversity Conference is due to happen later this year.

We’re calling on all governments to work together to combat the illegal wildlife trade, and protect endangered animals including pangolins, elephants and tigers.

Will you join us?