The new documentary The Real Chainsaw Massacre, following EIA undercover investigators in Vietnam and Laos, makes its UK premiere on Nat Geo Wild this Thursday, December 22, at 8pm; our Campaigns Director Julian Newman was one of the team being filmed and here he gives a behind-the-scenes glimpse of an investigation in progress.

It was an ambitious task, working with a film crew while carrying out a field investigation into illegal logging. The aim was to show as many steps in the trade as possible – from the cutting of the tree to the processing of the wood in a factory. All within in a two-week window.

The location chosen for the investigation was Vietnam and Laos. EIA had been there before in 2007 and exposed rampant trade in logs from Laos to Vietnam. This trade was feeding furniture factories in central and north Vietnam, in defiance of a log export ban in Laos.

In early 2010, we received intelligence of convoys of trucks moving logs across the border at the Bo Y checkpoint in southern Laos. As EIA had not visited this area before, it was decided that it will be the focus for the field investigation with the film crew from Red Earth Studio. 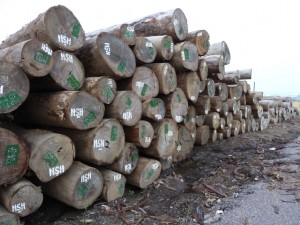 The story began in October 2010 in Ho Chi Minh City. A series of undercover meetings took place with wood traders to get a sense of the volume and kinds of wood coming across from Laos. As this aspect of the work does not lend itself to open filming, the film crew had to be content with staying right in the background so as not to compromise the safety of myself and a colleague from EIA while we posed at wood buyers.

Information gleaned from the meetings pointed towards the city of Quy Nhon as the main hub for trade in logs smuggled from Laos. Originally, we had planned to head straight to the border area after Ho Chi Minh City. We were reluctant to visit Quy Nhon as both of us had been there on the previous investigation. Quy Nhon is a small town and we were concerned we could be recognised by some of the people we had exposed before. Yet the evidence was too hard to resist, so we took the one-hour flight, kept our heads down and stayed at a hotel out of town. The gamble paid off – the port in Quy Nhon was full of logs from Laos, and we uncovered the stunning fact that most of the wood was owned by the Vietnamese military. 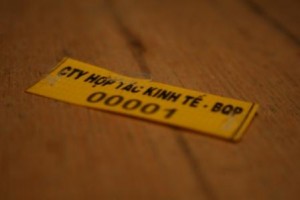 This was the major break in the investigation. Our aim now was to follow the trail back into Laos and get further evidence of the military involvement and the scale of wood theft from Laos. We took the road from Quy Nhon to the border crossing at Bo Y, stopping off in the towns of Pleiku and Pleikan on the way. As we got closer to the border, we saw increasing numbers of trucks carrying logs. This meant we had a good chance of seeing logging activity on the Laos side.

By the time we came to cross the border we had lots of footage and evidence. Not wanting to risk a closer inspection, all of our equipment and that of the camera crew was packed away. Predictably, at one stage in the crossing, at a kind of no man’s land between Vietnam and Laos, we saw a large cleared area full of logs. Tantalising evidence, but impossible to film with border police around.

Once in Laos, the atmosphere became more relaxed. We were able to film openly in conjunction with the camera crew, and were lucky in having two excellent drivers. We spent three days travelling around the southern Laos province of Attapeu, gathering increasing evidence of the scale of logging by Vietnamese firms, including the military, and the impact this was having on the Lao forests. Due to the rainy season lasting longer than usual, we weren’t able to get footage of logging taking place, but did record fleets of log trucks roaring towards Vietnam. After two intensive weeks of filming, journey’s end came at the town of Pakse in west Laos. Following a night drinking Beer Lao, we bade farewell to the drivers and film crew and went our separate ways.

Of course, a lot more had to be done after the trip to finish the documentary; lengthy interviews, information checking and scripting. I was also conscious that there was more information to be gathered from Laos once logging had resumed after the rains and so returned twice more in the first half of 2011 to get the additional footage and information required to produce an EIA campaign report, resulting in the release of our Crossroads report in July 2011.