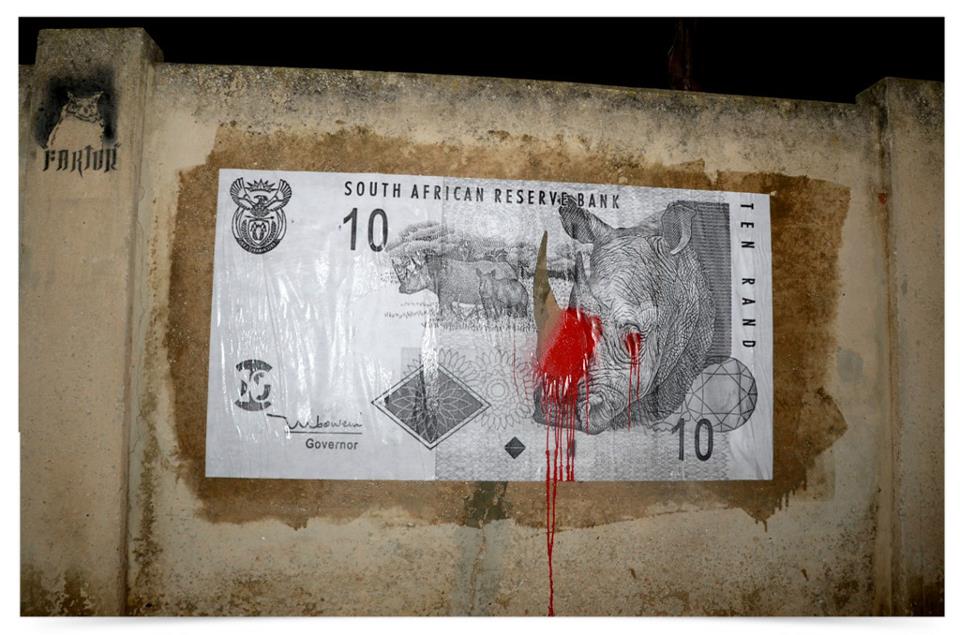 All about the money? Rhino awareness graffiti by street artist Faktor in Port Elizabeth, South Africa

It’s nearly three full years until the 17th meeting of the Conference of the Parties (CoP17) to the Convention on International Trade in Endangered Species of Wild Fauna and Flora (CITES) takes place in South Africa.

Yet a propaganda battle – or charm offensive, if you’re feeling expansive – is already under way in a bid to win over hearts and wallets if not minds to secure international approval for a legal trade in rhino horn, overturning a ban which has been in place for more than 30 years. 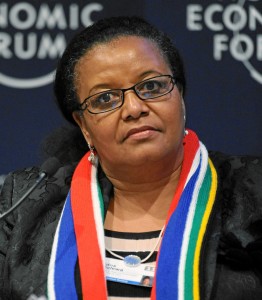 Edna Molewa, South Africa’s Water and Environmental Affairs Minister, and her delegation were doing the groundwork for a horn trading mechanism at CITES CoP16 in Bangkok this March.

She was quoted in the press as stating: “We believe it is the right direction as one of the measures [to curb rhino poaching]. The model that we have is based on pure law of supply and demand. Economics 101. Our rhinos are killed every day and the numbers are going up. The reality is that we have done all in our power and doing the same thing every day isn’t working.

“We do think that we need to address this issue of trade in a controlled manner so that we can at least begin to push down this pressure.”

It’s a stretch of the imagination to conceive that Molewa and her colleagues in Government aren’t seriously considering pressing their home advantage when CoP17 rolls into Durban.

And they’re not alone. Private rhino farmers in South Africa comprise a powerful lobby, and have also begun to implement their own strategies to pave the way for legalising a trade in rhino horn, touting the move as the only viable way of saving the rhino from extinction in the face of appalling, and rising, levels of poaching (as of May 30, a total of 367 rhino have been poached – 247 of them in the Kruger National Park).

But, to paraphrase Mandy Rice-Davies, ‘they would, wouldn’t they?’

For years, many rhino farmers have been dehorning their animals as an anti-poaching safeguard, but instead of destroying the legally worthless horn they’ve been storing it in bank vaults in anticipation of the day they’ll be able to sell it, leaving some of them sat on stockpiles which could be worth hundreds of millions of dollars if allowed onto the market.

The pro-trade lobby’s arguments are simple enough, albeit freighted with a horrible sense of déjà vu: efforts to curb poaching are failing due to huge demand from Asia, so the best way to preserve rhinos is to flood the market with the huge stockpiles of horn via a well-controlled legal trade, thereby satiating demand it and undermining the black market. 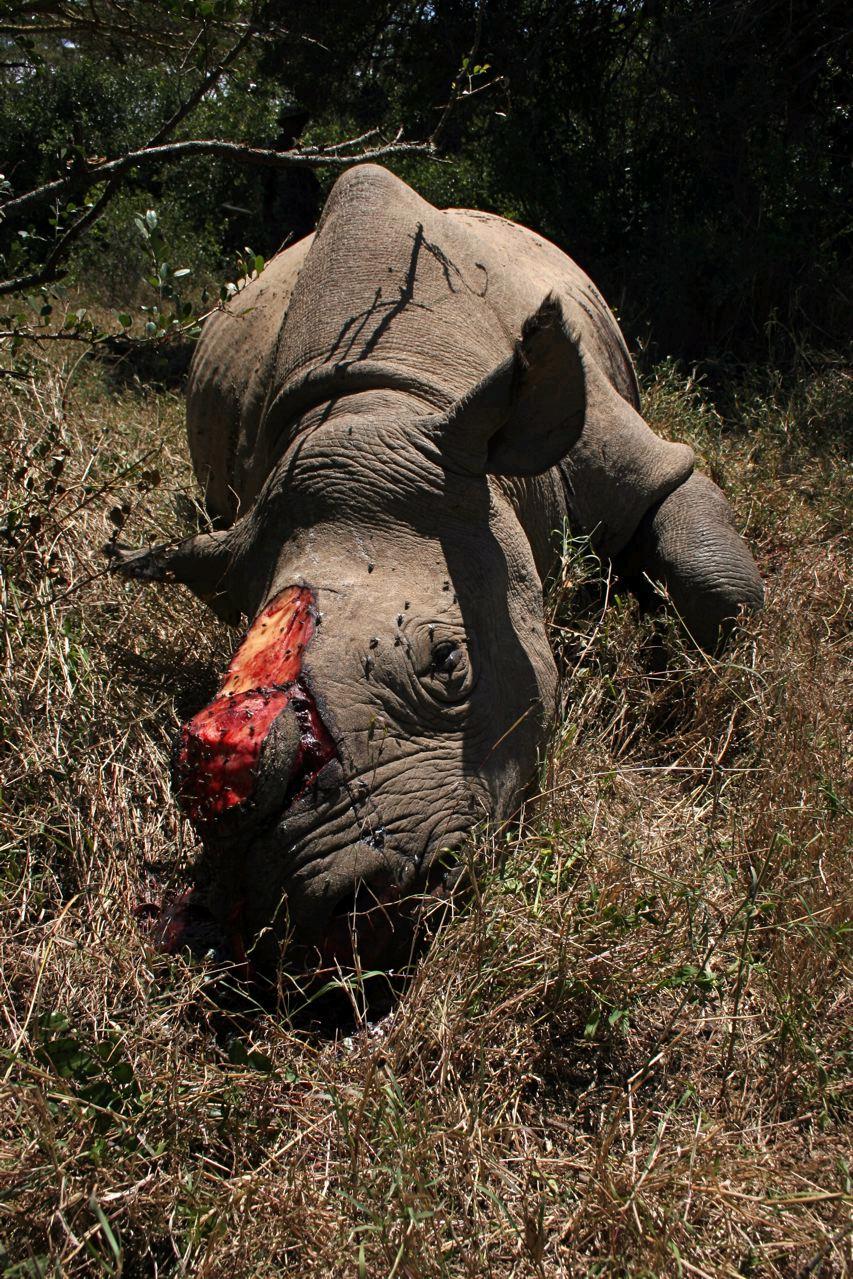 Rhino killed by poachers for its horn (c) EIA

There just one major problem with this scenario – it’s fundamentally flawed and won’t work, as history makes abundantly clear.

Much the same case was advanced in favour of allowing CITES-sanctioned ivory stockpile auctions to go ahead, undermining the 1989 ivory trade ban. And if the evidence of rocketing levels of elephant slaughter in recent years isn’t sufficient indication of the failure of this strategy, the evidence against it mounted even further recently when the Chinese media reported the conviction of a Government-accredited ivory trader in Fujian and his accomplices for their role in an international ivory trafficking scheme that smuggled nearly eight tonnes of ivory out of Kenya, Tanzania, and Nigeria.

The fact is that a legal ivory trade has done nothing to stem poaching but has instead directly helped stimulate demand, confuse consumers, and provide the perfect cover for poached ivory to be laundered onto the market. Furthermore, it provided the Government of China with an opportunity to effectively cash in as it bought Africa’s ivory cheap and sold it on to its own domestic carvers and dealers at a huge mark-up.

The ugly mercantile philosophy of ‘sell it to save it’ has had a spin of the wheel and has been a demonstrable, undeniable failure. Why should a legalised trade in rhino horn be any different?

With a few notable exceptions, it’s fair to say that South Africa has a poor record of enforcing CITES recommendations and protecting its iconic wildlife. Under the guise of legitimate legal hunting, it has recently presided over the farcical and clearly criminal phenomena of ‘pseudo hunting’ in which middlemen arranged permits for Thai bar workers and other individuals to hunt rhino; the resulting ‘trophies’ could then be legally exported, most often to Vietnam.

And Vietnam is, by and large, the main driver for the current slaughter of rhinos.

Accounts vary as to how and why this is, but the story usually goes that sometime in the latter half of the past decade a senior politician or other public figure in Vietnam was dying from cancer and given weeks to live – but after ingesting powdered rhino horn, the condition miraculously went into remission and the patient fully recovered. As with any urban myth, attempts to track the story to its source have been unsuccessful.

It would have to be a miraculous cure indeed, since rhino horn is effectively made of the same stuff as your own fingernails, primarily composed of keratin and without any medical value; in short, it’s a scam of the kind practiced on the gullible by Victorian quack doctors.

.In traditional medicine, rhino horn has been prescribed for just about everything, from curing demonic possession and warding off evil spirits and miasmas to treating hallucinations and bad dreams, boosting the body’s robustness and treating typhoid, headache, feverish colds, carbuncles, boils and fevers. It has also been used to expel fear and anxiety, to calm the liver and clear the vision, as a sedative to the viscera, as a tonic and to combat infantile convulsions, dysentery, vomiting, food poisoning, drugs overdoses, arthritis, melancholia and loss of the voice.

More recently, horn has been found to be sold as a ‘club drug’, a hangover prevention and cure (again, unproven) for the nouveau riche; would the people of South Africa really be happy to see their rhinos going to meet such a utterly shameful use?

But medical chimera or not, the belief in the efficacy of rhino horn in Vietnam is unlikely to go away any time soon. Against a background of considerable environmental pollution – in part from the US military’s widespread dumping of defoliant during the Vietnam War and in part from the country’s own ‘anything goes’ industrialisation in more recent years – Vietnam has one of the world’s highest cancer mortality rates.

It also has only a handful of medical centres treating cancers, with widespread poverty preventing most people from seeking diagnosis, let alone treatment; it’s perhaps not surprising that so many Vietnamese will take a chance on a folk remedy when they’ve no other choice.

So what message would a legal trade in rhino horn send out if South Africa gets its way?

For starters, it would effectively be legitimising a huge transnational crime, rewarding the kingpins and middle men for their persistence in outlasting the forces of law and order.

Perhaps more insidiously, a legal trade would be tantamount to telling the Vietnamese what so many of them want to hear due to a lack of medical options – ‘Yes, you can now legally purchase and take rhino horn for your cancer or other ailment’ – effectively scamming them afresh, but this time with the legitimacy of international approval. 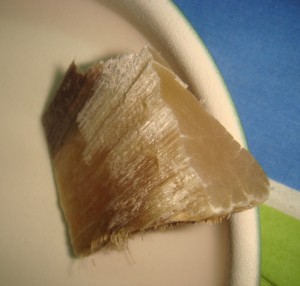 There’s so much more the Government of South Africa can do before it ventures down the road of turning one of the world’s most ancient surviving mammals into a commodity as if it were no more than a head of lettuce.

For starters, it could publicly cremate all rhino horn stockpiles, sending a very public message to the people of Vietnam that it’s worthless.

And it should be working at an international level to pursue and bring down the main players behind the trade with intelligence-driven operations, instead of seeking new ways to hammer the poachers – the most easily replaceable foot soldiers in the illegal trade – not to mention bringing pressure to bear on Vietnam and transit countries to expose official corruption and ensure their borders are more than lines on a map as far as smugglers are concerned.

South Africa is a long way from exhausting all its options in fighting the rhino wars – and throwing in the towel to cash-in on the desperation and ignorance of the Vietnamese should never have been on the table in the first place.