Durban was hot and steamy yesterday – it’s getting on for high summer in the Southern Hemisphere – and I spent the best part of the afternoon in a glorified prefab (aka the “EU Pavilion”). COP17 has been mercifully light on air conditioning, a huge relief after the two weeks spent shivering in Cancún last year, but when there’s only a sheet of corrugated iron between you and the midday sun, a bit of cool air doesn’t go amiss. 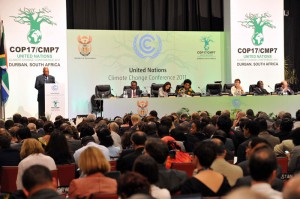 Opening of the COP17 climate change conference in Durban

That said, with a spot of intelligent design, air conditioning would probably be surplus to requirements at COP17 HQ. Nowhere is that more obvious than in its gloomy nether regions, which currently house various national delegations, including the EU. Under normal circumstances, this space is actually an underground car park and, needless to say, even on a cool day it can get pretty hot and airless down there. The temporary solution the conference organisers have hit upon is to set up dozens of stand-alone air conditioning units, which with no external outlet simply fan hot air around that part of the building. Not only is this completely inefficient, it’s also very noisy, making it impossible to have a meeting without resorting to using a microphone to communicate.

Of course, where there is air conditioning, it’s a pretty safe bet that there are HFCs and HCFCs, the super greenhouse gases with global warming potentials (GWPs) many hundreds to thousands of times more powerful than carbon dioxide. Regular readers will be aware that there is currently an initiative afoot to phase out HFCs under the auspices of the Montreal Protocol, which was set up in 1987 to rid the world of CFCs. In 2008, global HFC emissions were around 500 megatonnes of carbon dioxide-equivalent, approximately one per cent of global GHG emissions. But this is set to grow rapidly in the future; by some estimates they could account for nine per cent to 19 per cent of global GHG emissions by 2050 if left unchecked.

Nevertheless, the move to phase out HFCs has been repeatedly blocked by India and China. One of the main causes behind this intransigence are the huge revenues both countries have made from HFC-23 abatement under the UN’s Clean Development Mechanism – more than €1 billion and counting. Clearly, strategic considerations regarding their respective negotiating positions both within the Montreal process and the climate talks have also kept the situation in deadlock. Relentless lobbying by the chemical industry is another element serving to entrench the use of HFCs, which are falsely billed as “environmentally friendly” alternatives to ozone-depleting substances. 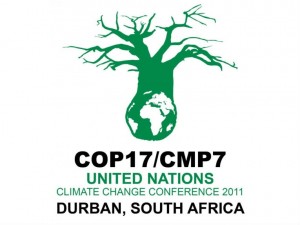 Both India and China (and, to a slightly less vocal extent, Brazil) claim that since greenhouse gases affect the climate (and not the ozone layer), HFCs should be discussed within the confines of the UNFCCC – ie, at the annual climate conferences. That sounds okay in theory, but when you look at the mountain of issues on the UNFCCC’s agenda right now, it’s hard to see when Parties would find the time and resources to negotiate a real and lasting solution.

A far more promising option would be to shift action on HFCs under the Montreal Protocol – after all, the abundance of HFCs in the atmosphere is the direct result of the phase out of ozone-depleting substances.

That’s certainly the view taken by the European Union, US, Mexico, Canada and the Small Island States, to name but a few. It’s also the reason that text currently being negotiated by Parties at COP17 contains language supporting action on HFCs under the Montreal Protocol as a complement to mitigation under the UNFCCC.  We first called for this at the 2007 Bali climate meeting and, while it makes perfect sense and is technically & economically feasible, the wider politics of the climate talks have prevented agreement until now.

Will this year be any different? Watch this space.