One year ago, almost to the day, I had just left an air-conditioned conference centre in South Africa  where international climate negotiators were still working on a deal to take one more arduous step forward in the effort to reign in global warming.

Fast-forward to the present and I’m on another continent but otherwise experiencing a disappointing sense of déjà vu.

As I write this, a final agreement has been reached and delegates from the United Nations Framework Convention on Climate Change (UNFCCC) Conference of the Parties (CoP), the international climate conference which has been convened on a more or less annual basis since the Rio Earth Summit in 1992, are flocking home after countless sleepless nights but relieved that the global regime which governs the Earth’s climate didn’t collapse altogether.

This year’s meeting – CoP18 – was held in Doha, Qatar. Eyebrows were raised when Qatar was announced as the host nation, not least because it is the country with the world’s highest per capita carbon emissions. The Gulf States as a collective are not famed for their stewardship of the environment and it was feared that having Qatar preside over the conference would be one more nail in the coffin of an ambitious climate regime. In the event, that fear didn’t really materialise, although there have been many grumbles about the chair’s failure to inject a sense of urgency into the negotiations from earlier on in the proceedings. 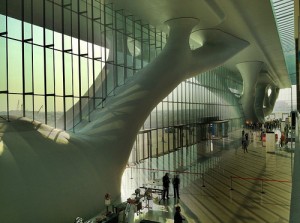 While last year’s outcome (an agreement to “launch a process to develop a protocol, another legal instrument or an agreed outcome with legal force under the Convention applicable to all Parties”) was hardly overwhelming, there was nonetheless a slight buzz in the corridors as CoP17 drew to a close. That buzz was singularly lacking in Doha. Maybe it’s because the (stunning) conference centre was so enormous, but a lot of people I spoke to just seemed jaded by the whole process.

That is in large part due to the very different political dynamics at this year’s talks. Just to take one example, the EU was last year lauded for its role in rallying a coalition of least developed countries and small island states to broker the face-saving deal on reaching a global climate agreement by 2015, entering into effect by 2020. This year, NGOs feel let down by the EU for a whole host of reasons, including its reluctance to increase its emissions reductions target from 20 per cent below the 1990 level to 30 per cent (even though it is currently at 27 per cent) and Poland’s intransigence on the carryover of 13 gigatonnes-worth of emissions credits into the second commitment period of the Kyoto Protocol (this is called “hot air”).

Of course, no one expected a major ‘event’ to happen at this year’s CoP, and although many people hoped that Qatar would use the opportunity of its Presidency to make its own pledge, it disappointingly chose not to. 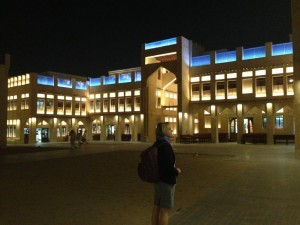 In what some have described as a symbolic gesture, given the absence of major emitters, Parties agreed on a second commitment period of the Kyoto Protocol from 2013 to 2020 with commitments for the EU, Australia, Belarus, Kazakhstan, Monaco, Norway, Switzerland and Ukraine.  Overall, however, there was no real increase in mitigation ambition, despite the existence of an enormous 8-13 gigatonne gap between the pledges that have been enshrined in international law and the effort required to limit global temperature rise to two degrees centigrade above pre-industrial levels by 2020.

On a slightly more positive note, there was a deal on a new ‘Loss and Damage Mechanism’, which will channel finance to help poor countries to cope with the impacts of climate change. It’s a significant development because, to date, the developed world has only proffered climate finance on the basis that it will help countries mitigate their carbon emissions. Nonetheless, the big unknown remains Parties’ willingness to put up any cash. At the 2009 Copenhagen negotiations, developed countries committed to pay $100 billion per year by 2020 to help developing countries adapt to climate change and lower their emissions but there was no agreement at this COP to scale finance up in line with that pledge. Just to put that $100 billion per year figure into context, President Obama last week asked the US Congress to approve $60 billion to cope with the impacts of hurricane Sandy alone.

On the hydrofluorocarbon (HFC) front, there was open and vociferous acknowledgement that these are gases which must be dealt with under the Montreal Protocol, and that, in light of the “(multi-)gigatonne gap”, this must happen sooner rather than later. As of January, a number of workshops will be held to identify ways of bridging the gap and a series of technical papers will be published to quantify how much various actions can contribute to emissions mitigation in the short term. There’ll also be a meeting of Heads of State in 2014; by that point, an HFC phase-down under the Montreal Protocol could (and should) be well underway.

It’s important to address the immediate shortfall in mitigation pledges because Parties need to get on with the crucial task of negotiating a global deal by 2015. As demonstrated by recent events far and wide, and most recently in the Philippines, the effects of climate change are becoming increasingly hard to ignore, particularly if you live on a low-lying island State.

And if we drag our heels for too much longer it won’t just be the island States facing obliteration.