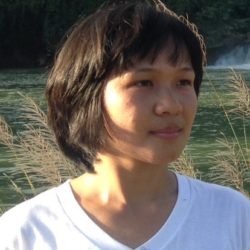 On this UN International Mother Earth Day, celebrated this year with the theme Trees for the Earth, we are proud to host a guest blog by Nang Shining, Shan activist in Myanmar and founder of the Mong Pan Youth Association and a co-founder of Weaving Bonds Across Borders. 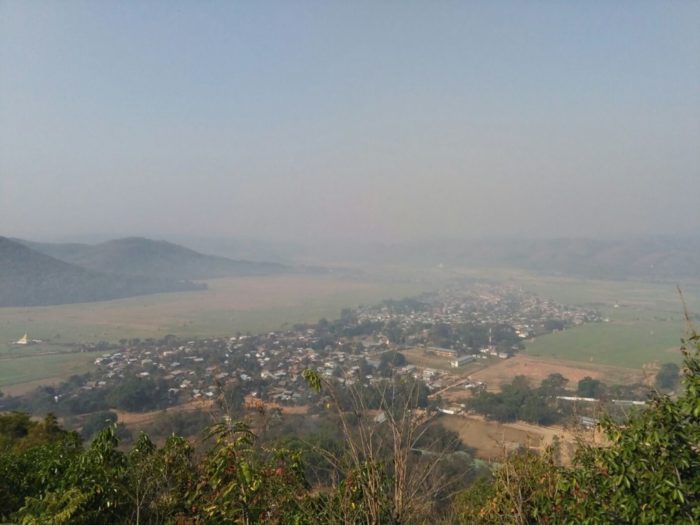 It had been a long year as I was apart from Mong Pan, in southern Shan State, Myanmar, a small town near the international river known as the Nam Khone in the Shan language, the Thanlwin in Burmese, the Salween in Thai and the Nu in Chinese. It is the hometown where I spent my childhood, surrounded by a range of beautiful mountains and a tall, deep teak tree forest. The Nam Pan River adds to the magnificent calmness and economic value of Mong Pan, flowing through its centre and the surrounding area.

It is very fortunate for me that I belong to an incredible place of such natural beauty, with a fresh breeze, clean streams and rivers, green paddy fields, fresh food and a friendly environment. The abundance of natural resources – water, river, forest, and mineral sources – brings wealth, prosperity and happiness to the residents. These common resources have met a wide range of basic needs for my family and community including for fodder, firewood, non-timber products, shelter and as a source of water. Forests have been an important resource for complementing our livelihoods and meeting our basic needs.

When I was young, the morning started with birds singing, the dog barking, the cock crowing and the conversation of farmers preparing to go to the fields before the sun was rising. The working environment was fun and delightful, as some were singing out loud and others teasing each other. As my hometown has a small population, we all knew each other and treated each other as family. In the past, there was no boss and no employees – people in Mong Pan exchanged their labour or shared crops instead of earning money for the work they were doing for their neighbours.

When I left I was 22 and full of energy, curiosity, aspiration, determination and the hope to explore new experiences in a new world. After 10 years abroad, I have been to many countries, visited many interesting places, engaged in a multi-cultural environment and experienced different kinds of delicious food. However, the happiness and precious memories faded when I witnessed the changes on my return. 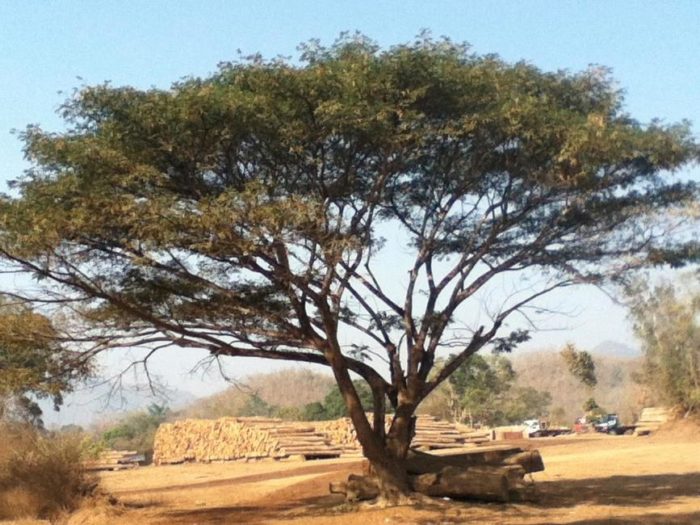 There are currently many destructive logging projects – both legal and illegal – in Mong Pan and the surrounding area. A large area of teak forest has been granted to companies and the villagers agreed they could cut the trees in exchange for the electrification of five villages. To this day, however, while the logging is ongoing the electricity has not yet been connected.

The Mong Ton Dam, also known as Tasang Dam, proposed for the Nam Khone river some 33km from Mong Pan, is another project of concern. One intention of building the dam is to cut all the teak trees in the brown and black zone (in Myanmar, three different types of zones are determined by the government: white, brown and black. Foreigners and tourists are allowed to visit the white zone but not the brown and black zones where conflict often occurs between the military government and armed opposition minority groups. Mong Pan is categorised as a brown zone where the space is shared between the Shan ethnic minority group, the military government and Shan armed groups. Black zones are controlled by armed opposition groups). There has been tension with a possibility of civil war if the dam is started because the territory of the Shan ethnic armed group will be flooded by the reservoir of the dam and much of the teak forest will be cut by the government and companies. Since 1996, and related to this project, 100,000 people have been forced to relocate and there have been massive human rights violations.

Local people have received no information regarding impacts and benefits of Mong Tong Dam. A report by the World Commission on Dams clearly states that potentially affected people have the right to information and participation in relation to mega-development projects. Yet, for both the Mong Tong Dam and for the teak forest concession, people have been excluded.

Even though the companies have undertaken preliminary research, there have been no consultation meetings yet in the potential affected areas. Instead, a consultation was announced to be conducted in Taunggyi, the capital of Shan State, 180 miles from the project area. During this first consultation on March 10, 2015 the potentially affected communities were not invited.

Furthermore, sensitive information was not voluntarily shared. I had to ask “how much percentage of electricity output will be used for Myanmar?” The answer was contradictory – they said “there is a great need for the energy sector for economic growth in Myanmar” yet in reality only 10 per cent of the dam’s output will be used for Myanmar and the rest will be exported to neighbouring countries, 45 per cent to Thailand and 45 per cent to China.

Regarding the logging, I was told by the villagers from Nong Pa Mone and Sope Hue villages that “a group of people came to our villages and asked us to sign if we want to have electricity in the villages in the end of 2014. Since then, the logging company came into our village, cut the log and brought them out of our communities.”

There are several underlying reasons constraints on Mong Pan community raising its collective voice to advocate for rights and to conserve the forest and environment. One is that forests and all natural resources are under control of the state and are thus state property. Due to this, and given that people have no negotiable power and no right to participate, only one-third of the teak forest now remains.

People have been living under the oppression of a military government for decades, with no freedom of expression, no right to assemble and no freedom to celebrate their cultural events. Until now, in the small town of Mong Pan – besides having a culture association group – there have been no social groups or organisations focusing on community development and peace-building activities. As the local people have not had the opportunity to learn about these issues, they have limited knowledge to transfer to the next generation. The people in Mong Pan are lacking opportunities to interact with the outside world and for them it’s difficult to imagine how to form a group and work as a team to build peace, to protect and promote the environment and community.

Growing up in a war zone, people tend to be more tense, sensitive and to lack trust and unity. Since there is lack of team-building activities, lack of information and very limited relationships with the outside world, the local people ignore these problems and are not interested in such social and political issues. Furthermore, as the education system is not fully functioning in the war zone, people tend to migrate to other countries for work. 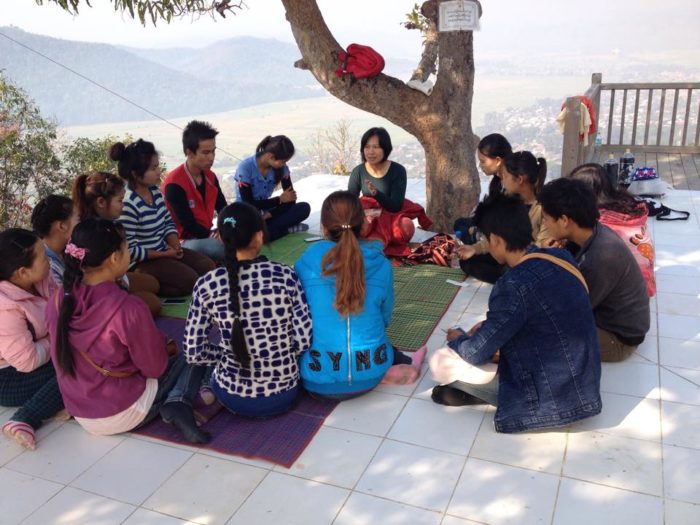 I returned to my hometown because of a grave concern to empower the youth and build their capacity, and to raise awareness about the ongoing social and political issues within the communities in Mong Pan so that they can be aware of their rights and take action to defend them and their natural resources. In February 2013, the Mong Pan Youth Association was established to empower Shan youth and their community. The Association is intended to catalyse a more active role in building peace and sustainable development in line with the principles of justice and equality in the long run. Here, sustainable development means when people are able to solve their own problems, attain inner peace, access to social justice and are able to manage their own natural resources and community development.

To have a more active role in the regional and international community, in early 2014 – together with two friends from the US and Columbia – Weaving Bonds Across Borders was established to empower communities around the world impacted by conflict, violence, environmental disasters and climate change.

When I was young, I used to think I could serve my community through sharing knowledge, enhancing people’s skills and encouraging consideration of how to value things, in particular the relationship between people and the environment.

I returned to my hometown to implement my hopes and dreams, since when I have been encountering many challenges due to it being in the ‘brown zone’, in a male-dominated culture, in an economy-oriented society and in a hierarchical system. It is not easy to spread the seeds of democratic ideals and human rights in the brown zone

To overcome those challenges, I build trust with influential actors in my community and engage with many other organisations across the country and the wider region.

Being a man bestows privilege in my community. A wife is supposed to follow the decision of her husband and a sister has to give priority to her brother. Even among social activists, this privilege can exist – I have always faced the bitter experience when moving one step forwards as a female leader in the community among men, always have to find a way to defend myself while maintaining a good relationship with male leaders. Yet I also have to empower women leaders and advocate for their rights. As the mind-set of people places physical development above moral development, it has not been easy to encourage people to turn their minds to social and political issues. Nothing is impossible but it may take time and resources to become the changes we want to see.

Sometimes, I feel down as every day of my life I see acts of injustice – the majority dominates the minority, the powerful oppress the powerless, the mainstream influences the marginalised and the rich undermine the poor. On top of that, our Mother Earth is being exploited in the name of development.

However, change often starts with hope, by individuals and with small actions. In the midst of risks and challenges, therefore, I devote myself to making better changes for society and the environment within my means and I will stand by the side of marginalised communities and vulnerable people.