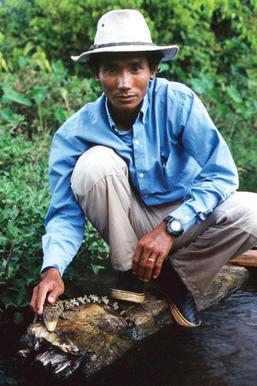 He was killed in Koh Kong province, in the south-west of the country, while documenting the illegal logging that is decimating forests across the Mekong.

Wutty, who was 48 and founder of the Natural Resource Protection Group, led a lengthy and unbending campaign against the nexus of corrupt politicians, businesses, military and police that has wreaked havoc on Cambodia’s landscape and ridden roughshod over the rights of its impoverished people. He took on the Government’s policy of granting large Economic Land Concessions, which has driven deforestation and the forced evictions of thousands of families in the name of development.

Confronting these vested interests, and doing so publicly, was an act of incredible bravery; Wutty is not the first activist to be shot dead in Cambodia; he knew the risks he faced, and continued to stand up and speak for the poor, the displaced, and those without a voice.

The details of precisely how he was killed are unclear. What is known is that he had been in the forests of Koh Kong with two journalists from the Phnom Penh Post, documenting rosewood logging near a Chinese-built hydroelectric dam. He was apprehended by a military police officer on behalf of an unnamed company that wanted to stop him taking pictures.

A spokesman for the National Military Police told the Post: “All we know is that our military policeman was doing his duty and encountered this person and there was a gunfire.”

Both Wutty and a policeman were killed. The police have since claimed the policeman took his own life after shooting Wutty.

It’s hard to see how any sense of justice could emerge from the fallout of Wutty’s killing. Maybe the man who pulled the trigger is dead – maybe not. But who is really responsible for his death? 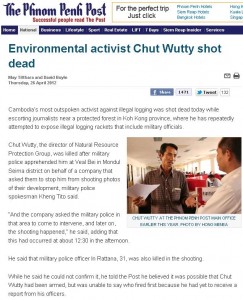 “Look at this story – and look at who will benefit from this killing,” says Sok Sam Oeu, the chairman of Cambodian Human Rights Action Committee.

Culpability for Wutty’s death lies at the door of these beneficiaries – the businessmen, politicians and officials making millions of dollars from environmental and human rights abuses.

In the months leading up to his death, Wutty had been involved in high-profile exposes of illegal rosewood logging and smuggling in protected areas. In doing so, he had taken on a deeply corrupt and violent trade whose tentacles spread across the Mekong. The increasingly rare rosewood species of the region have become so valuable that just one cubic meter can attract several thousand dollars in Cambodia or Thailand, rising to $50,000 by the time it reaches its target market in China.

Wutty wasn’t the first casualty of the rosewood trade this year. The shooting of Cambodian loggers crossing the border into Thailand in search of rosewood is now almost routine. The violence threatens to escalate, with Thailand increasingly bulking up the border with soldiers and no end to the stream of loggers willing to risk their lives for the returns available.

The deaths of more poor loggers will do nothing to stem the flow of rosewood and blood, or to honour Wutty’s legacy.

His killing lays down the gauntlet to the environmental and human rights community, globally, to ensure that the wrong people don’t benefit; to ensure that it doesn’t mean one less pair of eyes bearing witness to the human rights abuses perpetrated in the name of development but, instead, many more.