Last week, EIA campaigners were at an international workshop on the conservation of tigers and other wildlife, held in Kunming, China.

It was organised by the State Forestry Administration of China (SFA), co-sponsored by organisations such as the Global Tiger Initiative (GTI) of the World Bank and WWF, and attended by all tiger range countries (except Myanmar/Burma) plus several NGOs along with a large delegation of Government representatives from China.

The good news from Kunming is that EIA and our allies were able to ensure that the outcome of the workshop focused on effective enforcement and demand-elimination.

Some presentations during the workshop argued that tigers can only be saved by legalising the trade in tiger parts and products; can you imagine legalising the very reason for which tigers continue to be slaughtered in one of the world’s most populous as well as fastest-growing economies, with increasing disposable incomes?

There are not enough tigers in the world to satisfy ‘legal’ demand. The arguments made by the pro-trade faction were strongly countered, not only by EIA but also firmly shot down by a powerful intervention made by the representative from the Government of India who spoke about how a legal trade in tiger parts and products is entirely inappropriate and undermines the huge investment and commitment to wild tiger conservation nationally and internationally. 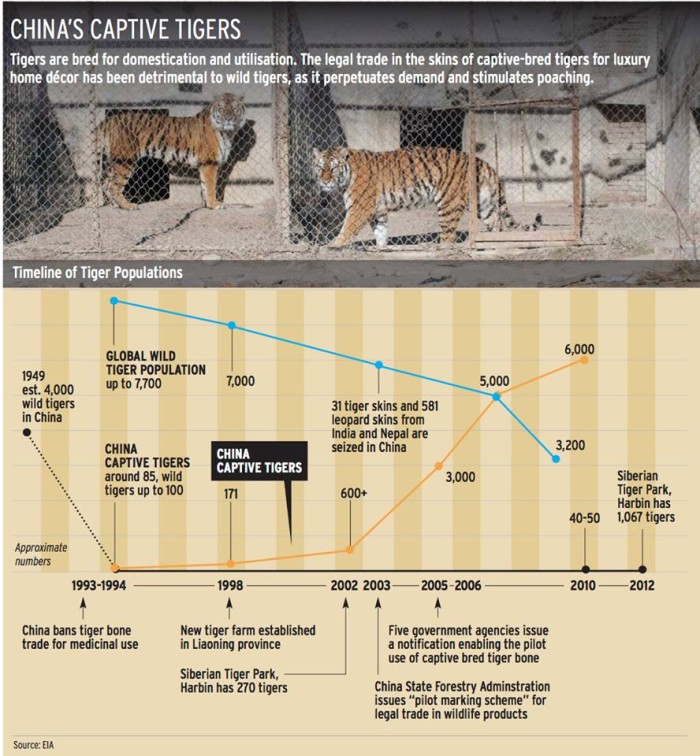 This infographic shows the rapid growth of captive-bred tigers in China has done nothing to support the recovery of wild tigers in that country; conversely, countries without tiger farms are seeing gradual recoveries (c) EIA

Ultimately, the workshop resulted in the governments adopting the Kunming Consensus, which identifies actions to be taken by them for improved management of transboundary conservation landscapes and combating illegal trade. EIA played an active role in the drafting of the Consensus by sharing useful insights and suggestions on effective enforcement and the nature of the Asian big cat trade.

Tiger range countries agreed to strengthen coordination and communication among themselves and other stakeholders “as a priority” for combating wildlife crime. This is significant because it reiterates existing requirements to undertake such actions under the Convention on International Trade in Endangered Species (CITES) and as member states of INTERPOL. Despite these decade-old promises, there have been several missed opportunities to snare criminals due to failures to share intelligence between various national enforcement authorities.

We now need to ensure that governments immediately translate these words into effective action this time around and that there is effective monitoring of implementation of this commitment.

A major problem in the Kunming Consensus is that it is directed to eliminate “illicit” demand for tiger parts and products. While EIA did point out that there is no such thing as “illicit” demand and that what is required is the elimination of demand for big cat products, the language remains in the Consensus, most likely because it has been used in past discussions within the GTI framework. The language used is also not surprising given that the host-country, China, sanctions a legal trade in skins from captive-bred tigers for luxury home décor. 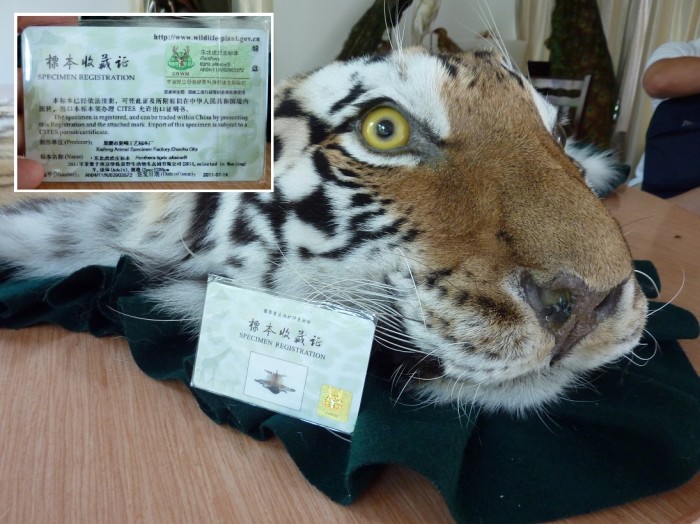 A permit and a tiger skin rug in Xiafeng taxidermy with, inset, permit details (c) EIA

During the workshop, EIA had the opportunity to share our recent investigative findings from China, published in our report Hidden in Plain Sight in which we documented permits issued by the SFA authorising trade in tiger skins from captive-bred animals.

This was also confirmed by a discussion I had with a high-level delegate from the SFA (the Division Director of the Department of Wildlife Conservation and Nature Reserve Management, SFA) who, when pointedly asked whether China issues permits for captive-bred tiger skins for luxury home décor, merely responded by saying this is done on a “case-by-case” basis and that the SFA will “look at whether it impacts wild tiger conservation”.

Simply put, what this means is that China believes trade in the skins and parts of captive-bred tiger does not impact on wild tigers and that it does not think encouraging businesses and consumers to trade in these products is a problem.

This shows a serious lack of commitment to wild tiger conservation by China given that, inter alia:
• EIA has documented several loopholes in the legal trade system that can allow laundering of illegal products;
• EIA has documented traders promoting and marketing their products in a manner that encourages and stimulates demand for big cat products as a fashionable trend or a symbol of high social status;
• the tiger farming industry in China has  been embroiled in criminality and has on several occasions been exposed for illegal trade in tiger products;
• a parallel legal trade undermines demand-reduction initiatives and international recognition that so long as there is demand, tigers will continue to be poached;
• a parallel legal trade frustrates effective enforcement against big cat crime, which is often transnational and organised;
• being highly endangered with a wild population ‘guesstimate’ of only 3,200 or so, tigers cannot afford the SFA’s perverse tactics to experiment with their fate. 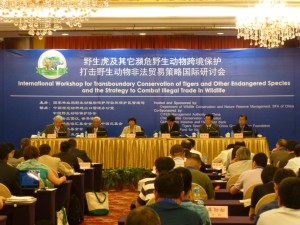 Overall, from observing the proceedings of the workshop and the discussions we had with several participants, I have returned with an overwhelming impression of just how much more work is needed to save tigers and the difficult challenges facing EIA as we work towards putting an end to big cat trade.

Governments walking the line of diplomacy – and, indeed, some NGOs as well – hesitate to broach the ‘sensitive’ issue concerning the 5,000-6,000 captive tigers throughout China.

Frankly, the more the international community avoids openly and objectively discussing the huge ‘elephant in the room’ of tiger conservation, the more time is wasted in failing to get straight answers from China. Is it really so problematical to call it as you see it? – “The captive tigers in China have no conservation or education value and are being bred for trade in their parts and products. At the highest levels, the Government of China must take control of the situation, put an immediate stop to breeding more tigers in captivity, declare and enforce a complete ban on trade in all parts and products from captive tigers, and ensure that all stockpiles of tiger parts and products are destroyed.”

• Action point: Governments, from tiger range states to transit destinations and donor states, must ask the right questions of the Government of China and must clearly support a ban on all trade in parts and products from captive-bred as well as wild tigers.

If you want to help make the changes the wild tiger needs, write to your Head of State and urge them to reach out to the new leadership of China, asking that every possible action is taken to end demand for tigers and other Asian big cats, including an unambiguous end to policies which promote trade, and putting more investment into enforcement resources to disrupt the major criminal networks controlling international illegal wildlife trade.