Today is World Rhino Day and, to mark the occasion, EIA has published an updated interactive map of the global illegal trade in rhino horn.

Depicting seizures and thefts of rhino horn as well as convictions relating to rhino horn trade worldwide from 2006 to September 2017, the map offers insights into a devastating criminal trade that continues to fuel the large-scale slaughter of rhinos in Africa and Asia.

Poaching for their horns is seriously threatening the survival of the world’s rhinos. The past decade has seen a dramatic escalation in poaching, driven by demand for their horns in Vietnam and China. In South Africa, home to about 90 per cent of the world’s white rhinos, more than 1,000 have been poached every year since 2013, up from just 13 in 2007.

The map is an interactive visualisation of data collated by EIA from publicly available sources, including news media, government and NGO reports and academic papers – the latest in a series of maps of illegal wildlife trade. 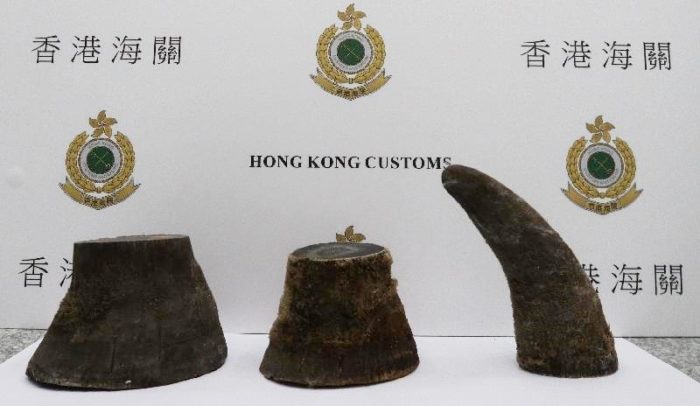 A total of 475 seizures of rhino horn by law enforcement agencies are depicted, involving approximately 4,179kg of rhino horn, equivalent to about 1,500 individual horns. Although not an exhaustive data set, the mapped data indicates the extent to which rampant trade in rhino horn continues: seizures from 2015 to September 2017 alone account for more than 2,150kg of the total (equivalent to about 775 horns).

Convictions for trafficking, trade or possession of horn are also shown on the map, where these have been publicly reported. It is striking to note how few seizures have been openly reported as resulting in convictions, this being crucial to ensure the law functions as a deterrent. Following decisions passed at the 2016 CITES Conference of the Parties obliging countries to report on illegal wildlife trade, we hope to see more information published on the  status of prosecutions in the near future.

Demand for rhino horn comes primarily from Vietnam and China, where it is used as a material for carving cups and trinkets; ground up for use as a hangover cure, a party drug or in traditional medicine (despite it having no medicinal value); or displayed whole as a status symbol.

The map indicates the extent to which Chinese and Vietnamese nationals have been heavily involved in the rhino trade globally. Overall, EIA’s records document the seizure of 1,135kg of rhino horn (equivalent to about 408 horns) explicitly linked to Vietnamese nationals between 2006 and September 2017 (27 per cent of total seizures represented) and 1,099kg (equivalent to about 395 horns)explicitly linked to Chinese nationals (26 per cent of the total).

The newest data included in the map also points to some emerging trends in the rhino horn trade – although increases in seizures may represent improved enforcement efforts as well as increase in volumes of horn being trafficked in that country. Multiple seizures in Cambodia and Zambia since 2015 indicate the significance of these countries in the transit of rhino horn. Vietnam and Mozambique continue to loom large in seizure figures: the mapped incidents include the seizure of 492kg and 320kg of horn respectively (equivalent to about 177 and 115 horns) since 2015 alone, more than any other country apart from South Africa during this period. In contrast, seizures of horn in Kenya appears to have fallen in recent years.

These insights into the illegal rhino horn trade present a picture of large-scale illegal activity, undertaken by organised criminal networks which are able to adapt to a changing enforcement landscape to exploit weaknesses and so continue to supply burgeoning consumer demand.

With only about 30,000 rhinos surviving on Earth, it is crucial that the international community cooperates to effectively crack down on this criminal activity while simultaneously taking steps to reduce demand for rhino horn products in end markets.

Conversely, South Africa has this year lifted a moratorium on domestic trade in rhino horn and its draft regulations for the export of rhino horn are fraught with loopholes that could result in the leakage of horn onto the international market, despite international commercial trade being fully prohibited by CITES. This move risks complicating law enforcement in Africa while confusing consumers and undermining demand-reduction efforts in Vietnam and China.

The wholesale slaughter of rhinos throughout Africa and Asia can only end with a concerted global effort to stop both the supply of and demand for rhino horn.

EIA calls on countries implicated in this data set to undertake intelligence-led enforcement targeting the criminals behind the trade, to make necessary legislative amendments to ensure that trade in rhino horn is explicitly illegal and to implement and support campaigns to reduce and end demand for rhino horn.