On July 2, China passed amendments to its Wildlife Protection Law (WPL), effective from 2017. The Environmental Investigation Agency (EIA) is extremely concerned that the revised law risks further entrenching the culture of commodification of tigers at a time when the world’s remaining wild tigers desperately need China to work towards ending demand.

The National People’s Congress (NPC) concluded the WPL’s first major overhaul since its inception in 1989 after a three-year process. Throughout, the issue of whether wildlife – especially endangered species such as tigers – can be ‘farmed’ and their body parts traded was, and remains, most controversial.

This was an opportunity for the Government of China to support tiger conservation and exclude tigers from any commercial breeding and domestic trade. Instead, the revised law is moving in a backwards and dangerous direction.

Chapter 3 of the WPL devolves authority to provincial government to approve commercial breeding of nationally protected species, which includes tigers, as well as the trade and utilisation of these species and their products for “captive breeding, public performances and display … and other special purposes”.

To date, that responsibility has been held by central government agencies and has included licensing the trade in the skins of captive-bred tigers, a licensing system EIA has exposed as providing a mechanism for laundering illegal tiger parts. The central authorities have admitted they don’t have the resources to monitor domestic trade and, under the revised WPL, the licensing system and domestic trade will become even more opaque.

EIA’s investigations have also found some provincial authorities are already willing to contravene a State Council ban on the use of tiger bone, allowing companies to manufacture tiger bone wine from captive tiger parts.

The new WPL also stipulates a fast-track system to sell and utilise the captive-bred population of wildlife under national protection. It’s not clear if tigers will be on this fast-track list since it has yet to be released. But if they are, according to Article 28, captive-bred tigers will not receive the highest level of protection; live specimens, parts and products could easily be sold within a set annual quota under a “special label”. A similar system regulates the domestic ivory trade in China, which is well documented as providing a cover for the illegal ivory trade.

Parties to the Convention on International Trade in Endangered Species (CITES) decided in 2007 that “tigers should not be bred for trade”. This decision was supported by some senior Chinese lawmakers who opposed the use of captive tigers during the drafting of the revised WPL. Members of Chinese civil society – lawyers, biologists, activists and many ordinary citizens – have also loudly expressed concerns about the revised WPL favouring trade over conservation.

However, there are still vocal advocates of using captive tiger bones: “Breeding tigers for eating is strictly opposed, but whether the bones of dead (captive bred) tigers can be used or not, the society needs to have a discussion”, an NPC official said in the press conference concluding the WPL revision. Such a move would be disastrous as consumer attitude surveys have shown a preference for wild tiger bone – no wild tiger would be safe anywhere. 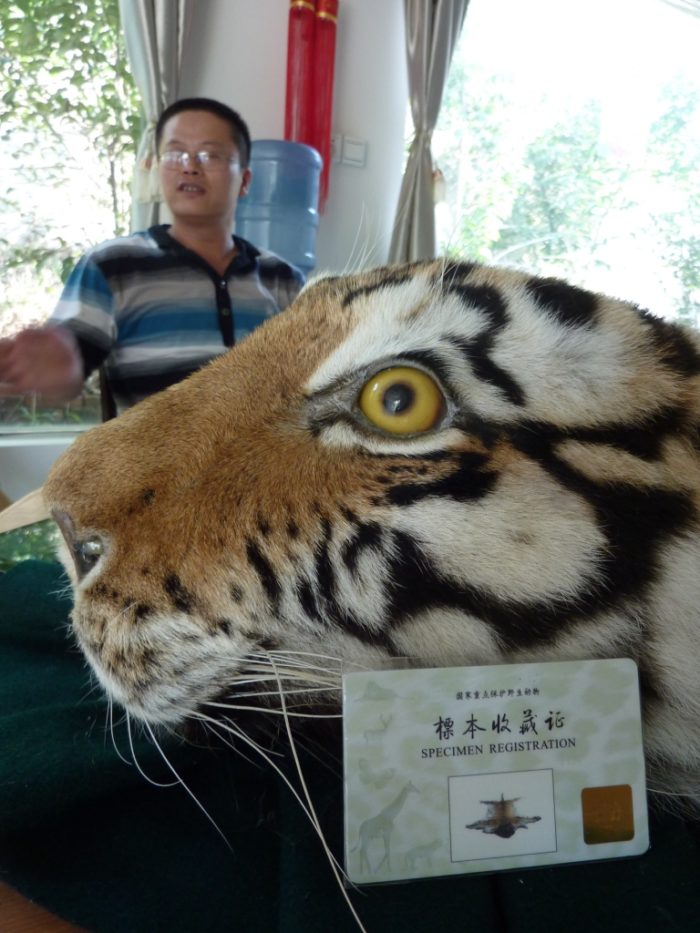 Until now, tigers have been on a list of species which were supposed to receive the highest level of protection in China under the 1989 WPL, with an additional State Council order in 1993 banning the use of tiger bones for medicine. Since 2005, however, some Government officials, commercial tiger breeders and a few representatives of the traditional medicine industry have been actively advocating domestic trade in a growing captive tiger population numbering 5,000-plus animals.

Since 2007, the State Forestry Administration of China has been running a centralised licensing system as permitted under the 1989 law, enabling taxidermists to sell skins of captive-bred tigers as luxury rugs, accompanied by official permits. The pro-tiger farming lobby argues that legalising trade in captive-bred tiger parts will relieve pressure on wild tigers but this skin trade experiment has proven to be a monumental disaster.

Far from reducing demand for tiger parts, trade has perpetuated their desirability and acceptability, in turn stimulating demand. The legal trade has had no impact on criminal networks and, whether motivated by consumer preference for wild tiger parts or by cost, has continued to drive poaching of wild tigers – and, indeed, leopards and snow leopards as substitutes – for the same consumer markets.

There are fewer than 4,000 wild tigers left, a 96 per cent population decline over the past 100 years. If they are to flourish once again in China and their Asian range, the Government of China must follow best practice from countries where there is a glimmer of hope for tiger recovery. In India and Nepal, where there are no tiger farms and there is a strong ethos of protection and prohibition of trade, there are signs that tiger populations are stabilising.

But there is no room for complacency while poaching continues. As countries with viable wild tiger populations strive towards Zero Poaching, China and other tiger ‘farming’ nations must work towards Zero Demand. That means sending a clear and unequivocal message to consumers, the breeding industry and processors of tiger parts that it is over – that no part of the tiger will be traded, domestically or internationally.

The revised law leaves tigers vulnerable. This is not the time for the Government of China to turn its back on international commitments and risk the efforts of fellow tiger range countries, this is the time for leadership. EIA urges the Chinese Government to take whatever steps are necessary to ensure that all trade, domestic as well as international, in all tiger parts and products of wild and captive tigers is prohibited.