Tiger campaigners from TigerTime have met with British Foreign Office Minister Jeremy Browne MP as part of their on going fight to see the trade on tiger parts banned. 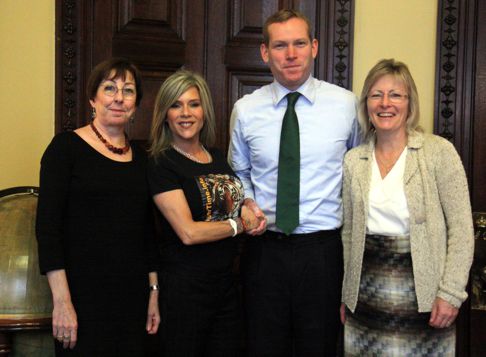 The meeting at the Foreign & Commonwealth Office on Wednesday, December 21 took place as the supporter signature count on the www.bantigertrade.com petition soared above 31,000. This figure was reachedin a little over 30 days.

Mr Browne said: “The British people care deeply about tiger conservation and have a special desire to protect this amazing species because of their beauty and rarity. I am making a new appeal to the Chinese Government to consider how this species could be better protected and preserved.

“I welcome the public commitment given by Premier Wen Jiabao last year, and urge the Chinese Government to honour that commitment by enforcing a zero-tolerance policy of all trade in any tiger products of any kind from any source.”

Samantha Fox, who helps lead the TigerTime campaign, said: “I was delighted that the Minister appeared to take the issue so seriously. I particularly welcome his strong commitment to calling for a zero-tolerance policy where tiger trade is concerned. I am confident that the Minister will be a major advocate in our fight to save the wild tiger. We await with interest the response to his efforts.”

Debbie Banks, EIA Lead Campaigner on tigers, said: “This couldn’t come at a better time as yet more tiger bone wine is scheduled to be auctioned off in China at the end of the year.

“It’s both a positive step and very pleasing to see this issue getting the higher level of attention in the UK that it deserves, and that the British public wants.”

EIA is a member and supporter of the TigerTime initiative.