Faith Doherty, EIA Forest Team Leader, was yesterday (February 4) at the Embassy of the Republic of Indonesia in London to present a formal address as part of the  Interactive Market Dialogue on the Indonesian Legal Timber and the European Union Timber Regulation, at the invitation of His Excellency T.M. Hamzah Thayeb, Indonesian Ambassador to the UK.

Faith took the opportunity to look back at the long road to change in Indonesia’s forests, and to flag up concerns about the practical operation of Indonesia’s timber legality verification standard (SVLK).

Here is her address in full:

Your Excellency, distinguished guests, ladies and gentlemen. Thank-you very much for the opportunity to speak at this interactive market dialogue on the Indonesian Legal Timber and the EU Timber Regulation.  It is good to see some familiar faces from Indonesia in this room and, of course, EIA’s old friends from the Government of Indonesia whom we have had a long and at times fraught relationship, but one that has proved to be durable,  honest and productive.

For those of you who don’t know EIA, we are a small environmental campaigning organisation that was founded in 1984. At the heart of our work are undercover investigations that are carefully planned and include working on the front lines of environmental crime, returning with credible evidence that is used to expose but also to campaign for change. Our friends in Indonesia are very familiar with our investigations, and we know that through our working relationship we have worked with some of the most courageous people unafraid of tackling Indonesia’s timber mafias.

Since 1999, EIA has been working in Indonesia in partnership with Indonesia civil society groups to address the issues of forest governance – issues that have caused massive deforestation and degradation of forests, mainly through illegal logging and its associated trade.

In Indonesia, weak forest governance that is marked by rife corruption, weak law enforcement, and a lack of transparency and participation within the decision-making process has been identified as the biggest obstacle in tackling deforestation and forest degradation in Indonesia. Over the past 12 years, EIA and our partners have conducted investigations into illegal logging, gathering evidence that we have presented to the Indonesian authorities so that the law can be upheld. EIA, together with our partners in producing countries including Indonesia, is actively involved in the regional and international work that has pressured consuming countries to take responsibility themselves on the issue of illegal logging and their consumption of illegally sourced timber and wood products. 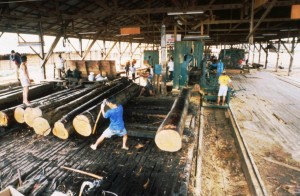 In 2002, the Indonesian Government signed an MoU with the UK Government on tackling illegal logging. This MoU paved the way for the developments we are seeing now.

In 2003, work started on defining legality. Driven by civil society and later approached through a multi-stakeholder approach, Indonesia took a huge step by working inclusively; this really was a very real starting point towards improved governance. We were involved in, and witnessed for the first time, all stakeholders (the Government, the private sector and civil society) sitting together and openly discussing some very difficult issues. This multi-stakeholder approach resulted in a version of the timber legality verification standard (in Indonesia known as the SVLK) that was agreed to by all stakeholders and was enacted in 2009.

For us, the agreement that, under the SVLK, independent monitoring by civil society was formally recognised was not just something we wanted because we’re civil society but because the system needed credibility and this was one way to ensure that. Again, a huge achievement for Indonesia.

However, the SVLK is not perfect but we are happy to learn that it is open for improvement. Up until now we note that the SVLK has been revised twice, with a new regulation just issued last December.

While all of this was going on, Indonesia began negotiations on a Voluntary Partnership Agreement (VPA). This agreement seeks to ensure that all timber and wood products exported from Indonesia to the EU will come from legal sources. This system will provide a FLEGT license.

After four years of negotiations, the VPA was initialled in 2011. This was not just an achievement of both Indonesia and the EU, but it is still the first ever VPA in Asia.

As I was writing this speech, I went and looked back at all the activities, investigations, meetings, arguments and notes on the meetings we had demanded of the Government, the times we literally put our foot through the door of the different ministers giving up-to-date intelligence as to who was behind the timber mafia. And there comes a time when I could see a difference in attitude from Government officials and also us … we have both worked hard to maintain an accessible relationship, and we hope that this will continue between the GoI and civil society into the future as we face even more challenges. But the major message stated after the event in Jakarta was that all this work and agreements would only work if the GoI worked hard to maintain transparency. 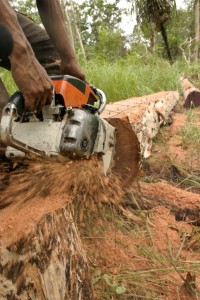 After a major campaign in Europe,  in October 2010 the European Parliament passed the EU Timber Regulation which will prohibit the first placing of illegally produced wood products on the EU market, as well as requiring a system of due diligence. The prohibition was actually one of the demands from Indonesia, as one of the VPA partner countries.

We, as European civil society, fully support this regulation and we do look forward in monitoring its implementation together with the implementation of the SVLK in Indonesia.

It’s been two years now since the implementation of the SVLK and, while supportive, it would be remiss of me not to mention some concerns.

There is absolutely no system of information for the SVLK implementation that is up & running and accessible. At the moment, the Timber Legality Information System is still not accessible and does not contain enough information. In fact, I went to the Dephut website today and it was unavailable. But, in looking at it before, there is not enough information, for example, no recap of certificates issued, complaints, etc).

We have heard from the civil society monitoring network in Indonesia that obtaining information is still difficult, even though their rights to information is guaranteed by the law.

We have noticed that there is still quite a gap in understanding amongst civil society monitors, the private sector (including audit bodies) and even government officials on the SVLK.  A well-functioned, accessible information system we believe would help to close or narrow this gap.

We have also noticed that timber produced from legitimate IPK permits is not being audited under the SVLK. This is conversion timber that has a timber utilisation permit. To our knowledge, not one single IPK permit-holder has been verified. This is a serious and major loophole in the system, as IPK timber produced in Indonesia is of significant quantity. According to the Ministry of Forests production statistics, IPK logs made up 73 per cent of all natural forest logs in Indonesia in 2012. We understand this situation to be one where, for example, if an SVLK auditor sees a timber factory is claiming it will use timber from an IPK for its raw material supply, the auditor does not audit the harvesting of that timber but assumes that because the firm has an IPK it is operating it legitimately. There is no monitoring by accredited SVLK auditors to see if harvesting under IPK permits is being done in accordance with the law.

One major problem is that, should any of the unverified conversion timber enter the supply chain and the market, it will pose a big question of the credibility of SVLK and whether it functions well as a tool to guarantee legality.

Through discussions with Indonesian civil society groups, we have become aware that the complaint-handling mechanism is still very weak and in need of attention. Only a few complaints have been followed up properly, with many complaints ignored or the response very weak.

Despite the SVLK being mandatory, no clear sanctions are mentioned to those who do not comply. We see from the regulation that the deadline for all permit holders in the forest to have their legality certificate is by March 31, 2013. What are the consequences for those permit-holders if this deadline is missed? We note that the deadline for primary industries to get legally certified by December 2012 has already passed.

These are a few of our concerns, and we are very happy to discuss solutions to them, and I urge that the issue of conversion timber be a priority so that all this hard work is not undermined.

Finally, I want to finish by saying that EIA has never and will never give up on Indonesia. We have always, together with our partners, used our experiences and lessons learnt from some of the best and most courageous within to push for reform in other countries. It’s been a remarkable journey and one that has yet to end. From those first days deep in the forests of Central Kalimantan to now, there have been major steps of improvement for forest governance. But there are still issues to be addressed, and we really look forward in working with you to ensure that all the hard work over these years means something.