EIA is proud to have set the ball rolling towards a global plastics treaty and we’re currently on the ground in Nairobi to press a key UN meeting to make it ambitious. Watch this space for further updates from Ocean campaigner Tom Gammage …

Day 2 – momentum continues to build, but no decision yet

The second day of UNEA saw another thrilling day of eclectic events and meetings.

While no formal adoption of the plastics resolution occurred, the events surrounding International Waste Pickers’ Day and the International Persistent Organic Pollutants Elimination Network (IPEN) side events were of particular note. 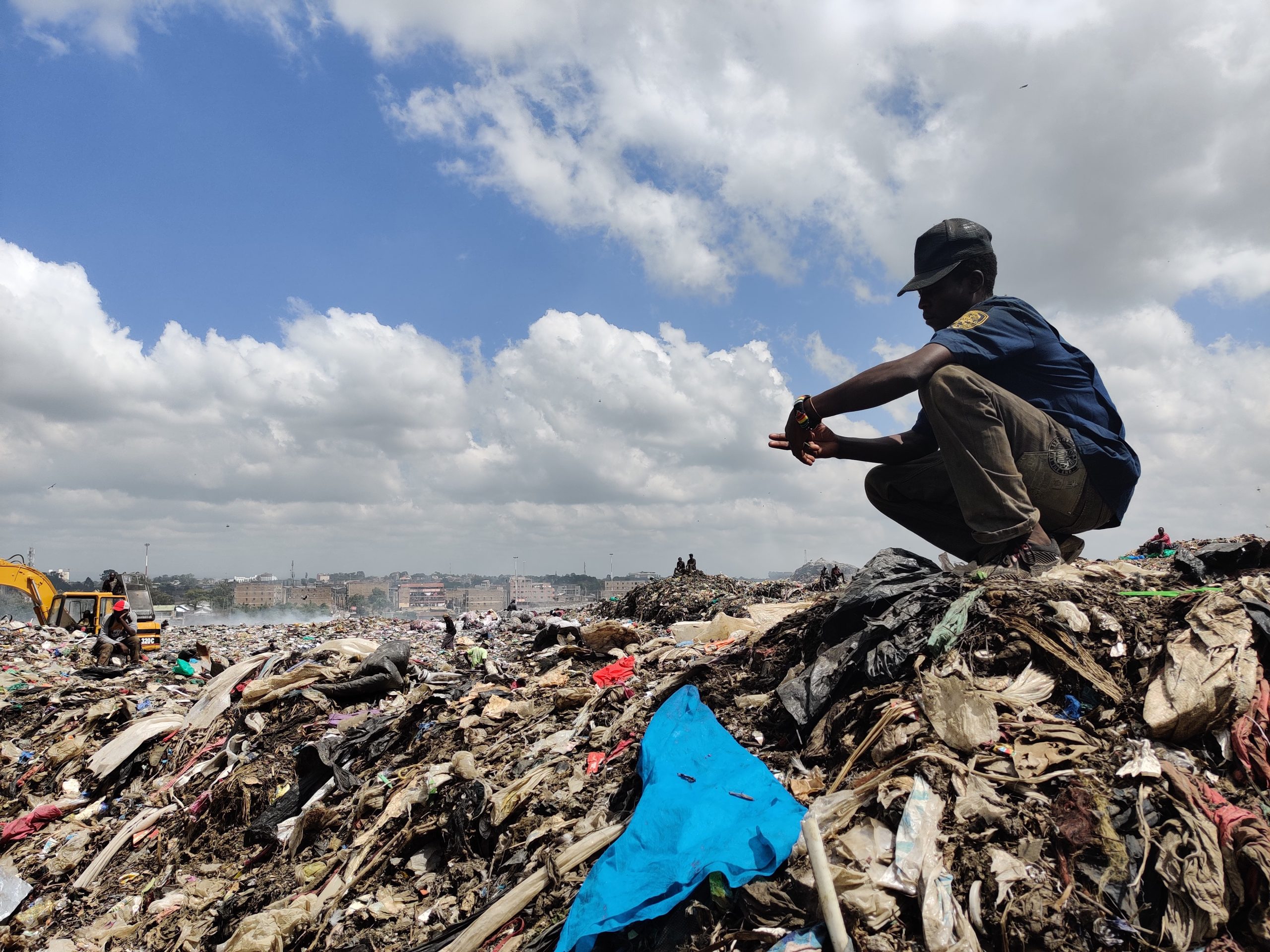 Also known as the ‘informal waste management sector’, this historically marginalised and disregarded group is responsible for about 60 per cent of all plastics recycling. It comprises tens of thousands of people from around the world who live on or near enormous waste tips, where they sift through overwhelming quantities of plastic waste to separate plastics and other materials that can be recycled. 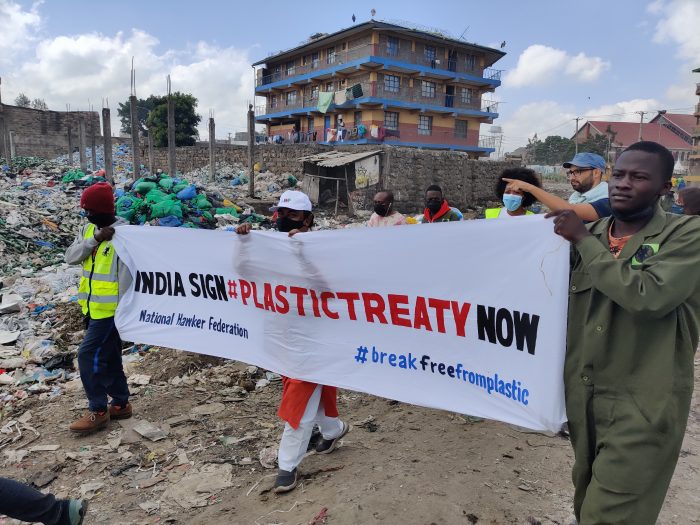 This wasn’t the only first, however. If the proposed plastics resolution text is adopted today, it will be the first time they have been recognised in international law. This is critical to ensure they have a seat at the table of the treaty negotiations, that their contribution to sustainability in the waste management sector fully recognised and their human rights upheld.

In solidarity with waste pickers the world over, the EIA team went to the sprawling Dandora site, the largest open and unregulated dump site in East Africa, alongside waste pickers’ representatives and other civil society organisations.

Having opened in 1975, it was deemed full in 2001 yet continues to operate in an unregulated manner, with about 3,000 tonnes of industrial, agricultural, domestic and medical waste arriving by truck every day.

People at the bottom of the socioeconomic ladder come here as a last-ditch attempt to scavenge a living, but in so doing expose themselves to horrendous pollution, including lead and polychlorinated biphenyls (PCBs) which are extremely hazardous to humans. Much of this pollution comes from plastic waste. 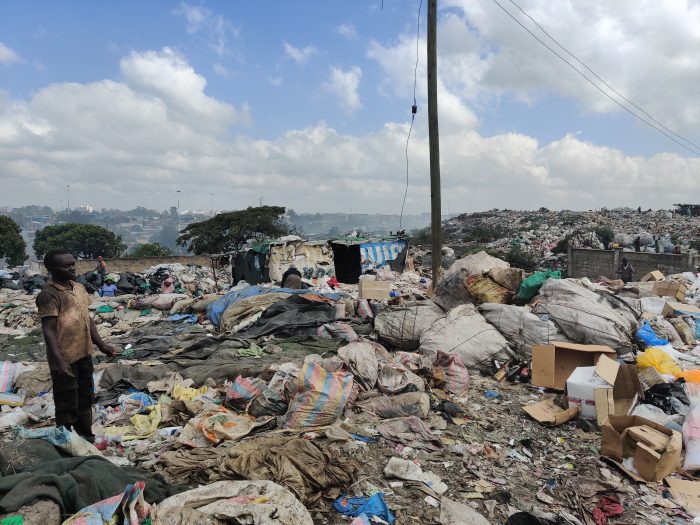 From the middle of the dump site, the global alliance held a press conference in the morning where representatives spoke with grace and strength as they pressed home the struggles they face every day for recognition as well as the importance of the current resolution text which acknowledged them for the first time.

Dandora is a poignant and shocking example of why we need reduction at source and the right to a healthy environment upheld.

International Pollutants Elimination Network (IPEN) is a long-standing ally of EIA’s and is a global network of public interest NGOs largely in low- and middle-income nations working to strengthen global and national chemicals and waste policies.

It used its press conference yesterday as an opportunity to highlight the inherent links between chemicals and plastics.

Despite intense diplomatic confrontations last week on the resolution text, when the Peru delegation (a co-sponsor of the original proposal for a treaty) was asked if it got all it wanted from the current text, it replied simply ‘yes, absolutely’.

This reply was set against the backdrop of another question from Chemical Watch, an industry news outlet, which asked if chemical additives were included in the agreement. IPEN scientists used this opportunity to highlight the urgent need to regulate chemical use in plastics (of which at least 10,00 are used, 25 per cent of which are hazardous to humans).

It also gave the opportunity to both Peru and Switzerland to outline that, although the word ‘additive’ does not appear in the text, we finally have the framework we need to address them during the treaty negotiations themselves. Switzerland also used the press event as an opportunity to highlight how there is still no agreement of what the ‘full lifecycle’ actually means and how this will be a key topic for discussion (hint: it absolutely needs to include, at minimum, plastic production!).

While there was no decision made on the plastics resolution, it is almost certain this will happen today when UNEA concludes. 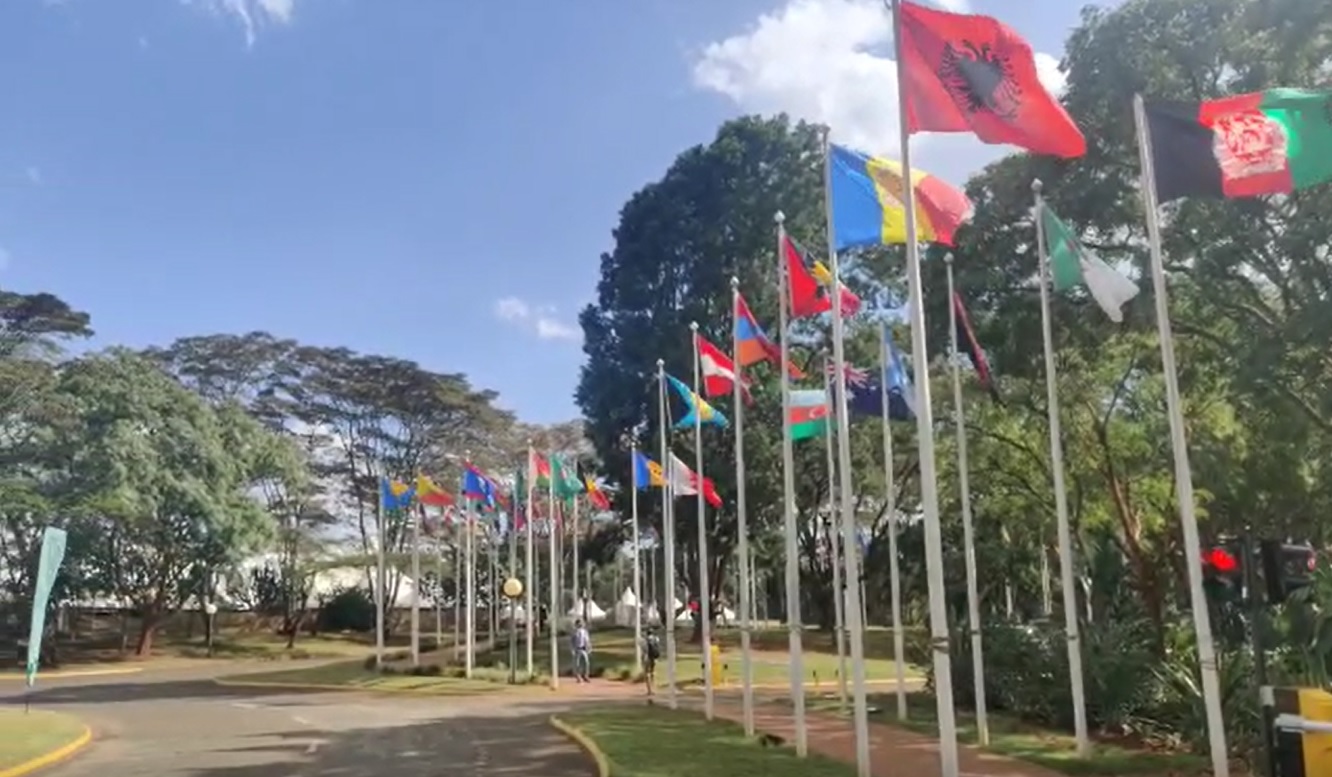 The provisional adoption of the draft plastics treaty resolution in the early hours of Monday morning meant the mood was hopeful and energy optimistic, with ministers, country representative and other stakeholders arriving from all around the world.

With the COVID pandemic causing the cancellation of the original assembly planned for February last year, it was the first time many had had the chance to meet in person since 2019. 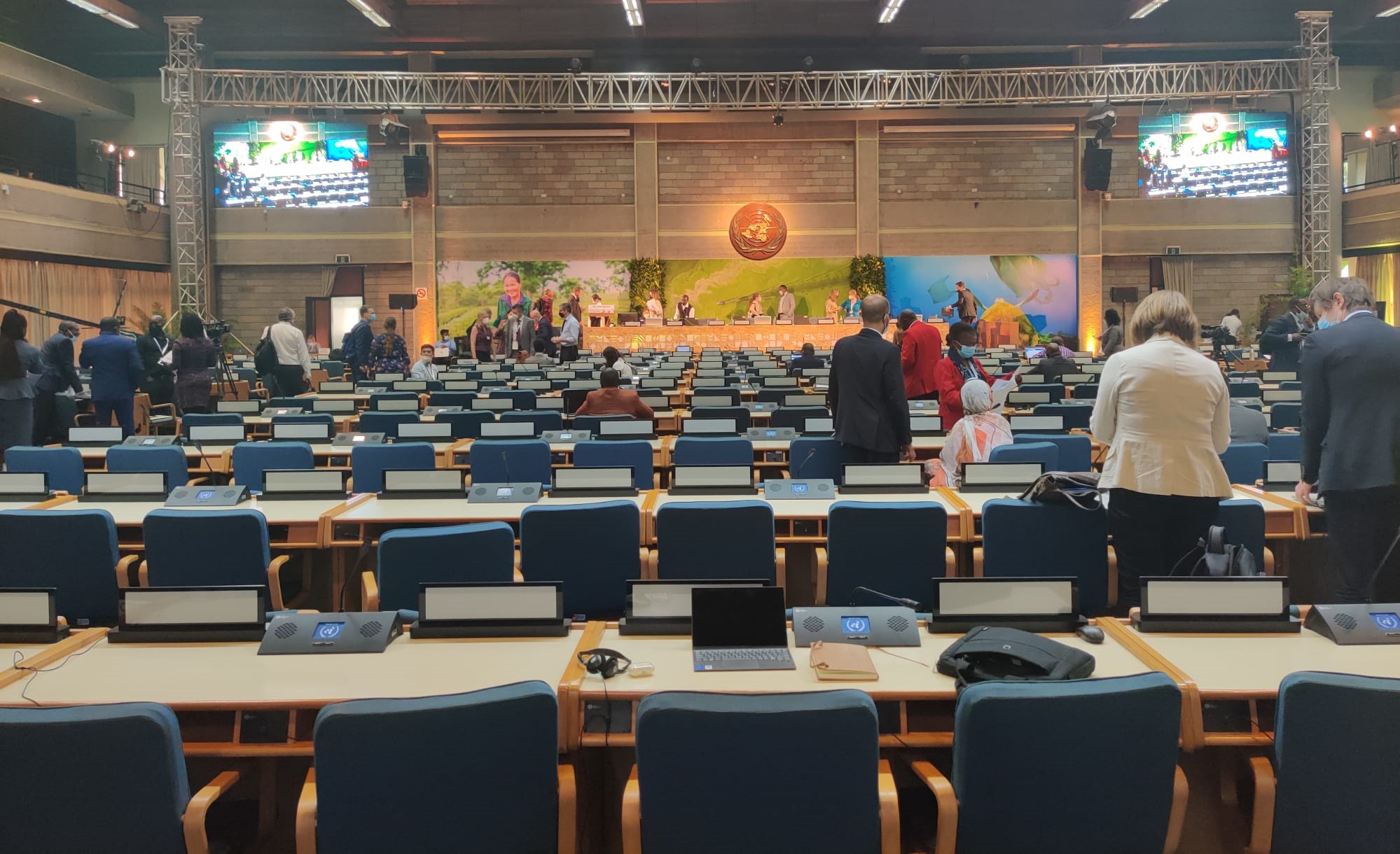 The day started with the plenary (main meeting) session which saw countries give statements on their respective positions and perspectives on the various topics up for discussion.

Of the five thematic areas up for discussion – including green recovery, animal welfare and chemicals – plastics were clearly recognised by all as the flagship issue. Having only existed since 2014, the UNEA has never adopted a legally binding agreement and there was a clear sense of expectation that this would be the time for it to demonstrate its capability as the highest decision-making body on the environment.

UNEA Executive Director Inger Anderson began the proceedings with an impassioned address, noting the need to go beyond basic voluntary commitments and into bold, meaningful action. Making specific reference to the plastics resolution currently on the table for adoption, she expressed her confidence that this would be the time for UNEA to prove itself and for the agreement to be adopted.

Kenya’s Environment Minister Keriako Tobiko also gave an insightful and inspiring speech in which he noted the ways in which humanity has commodified nature and the urgent need to undo terrible destructive trends.

Committee of the Whole

The Committee of the Whole is a convening of countries and all their representatives near the beginning of UNEA on specific thematic topics; it can be seen as the second tier of proposals needed to pass before they are formally adopted and passed by UNEA.

During the Committee of the Whole, countries are given the opportunity to run through the resolutions that were agreed during the pre-negotiations last week and provide statements on their perspectives and priorities.

The plastics resolution gained further attention and received widespread support from many countries, who all expressed their sincere appreciation for the negotiated text. Without a single country stating concern with the plastics resolution, it was submitted to UNEA for consideration.

A warm welcome from Kenya

UNEA is always held in Nairobi, the headquarters of the UN Environment Programme (UNEP).

As a token of appreciation and welcome for all the world’s countries and stakeholders once more making the biannual pilgrimage to UNEP HQ, it hosted an incredible reception on the idyllic grassy plains of the UN compound.

Surrounded by trees and nestled in a coloured marque lit up with enchanting fairy lights, traditional singers and dancers entertained the guests as they socialised and enjoyed informal exchanges. The reception was a chance for country representatives and stakeholders to mingle in an informal setting, away from the intense diplomatic negotiations. After so long cooped up indoors and behind computers, EIA’s team enjoyed the opportunity to come together, dance and foster relationships with partners and other concerned parties.

With the transfer of the plastics proposal through the Committee of the Whole and into formal UNEA proceedings, there is an increasingly unlikely chance that any country will decide to re-open text and mess up the process.

As such, it is now almost certain the treaty will be adopted, but as always in these things, nothing is decided until everything is. The EIA team is therefore awaiting tomorrow with bated breath, when the final decision may well be agreed.

A week of pre-negotiations

Last week was an extraordinarily busy, eventful and demanding one here in Nairobi, where pre-negotiations for the 5th United Nations Environment Assembly (UNEA-5) took place.

The pre-negotiations, known officially as the Open-Ended Committee of Permanent Representatives, saw representatives of countries from around the world come together to negotiate the text of resolutions (decisions) to be made this week at UNEA-5.

These decisions are extremely important for the global environmental agenda as they set the priorities for the next two years and one of them was to initiate work to develop a new legally binding international treaty on plastics – a dedicated campaign of EIA’s Ocean team.

What was on the table for negotiations? 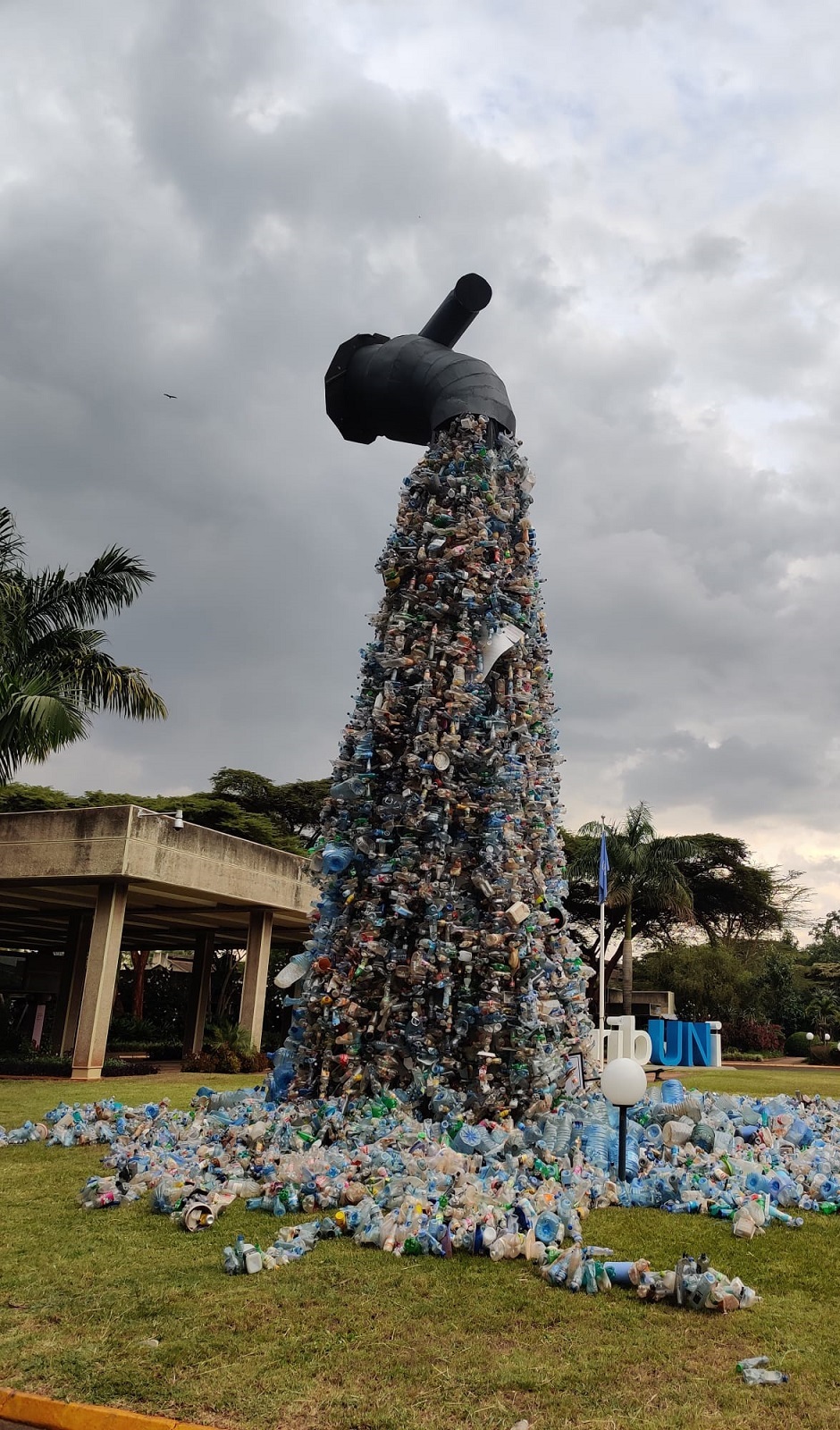 Plastic pollution is the hot topic of UNEA-5, getting major traction in the opening session while Inger Anderson, Executive Director of the UN Environment Programme (UNEP), stated this could be a Paris moment for plastics.

As delegates entered, they were confronted with a huge art installation by artist Ben Von Wong, made using plastic waste collected in Nairobi and assembled on the front lawn of the UN venue – sending a clear signal that we must act now to turn off the tap of plastic pollution.

As discussed on EIA’s recent podcast, there were several proposals on the table for discussion, including one from Rwanda and Peru which called for an ambitious treaty with a focus across the whole lifecycles of plastics, another from Japan calling for a focus on waste management and ocean pollution only and a third from India calling for voluntary action only. Before the meeting, the Japan and Rwanda/Peru resolutions were combined into a single text to serve as the basis for negotiations.

Running from Monday (21 February) all the way through to Friday, the negotiations were long, drawn-out and exhausting, with countries passionately wrestling over the text that would be put forward to UNEA. On most days, they began at 10am and went on until early the following morning, with seemingly endless hours spent negotiating single words and phrases.

In international law, sometimes a single word is the difference between getting what you want or not; as such, each was sensitively yet ferociously fought over by different groups of countries.

In the middle of negotiations, a cataclysmic event occurred which spilled over into the proceedings – the invasion of the independent state of Ukraine by the Russian Federation. Ukraine’s embassy sent a letter to the UN Environment Programme (UNEP) saying it was impossible to hold discussions on a Russian proposal about the organisation’s regional makeup due to the invasion.

During the closing plenary session, representatives of the EU, US, UK, Japan, Canada and New Zealand supported Ukraine in its interventions by condemning Russian aggression.

While Russia made it clear that it did not want to mix environment and politics, it is still unclear if these events will ultimately detract from what is adopted at UNEA this week.

Working into the weekend 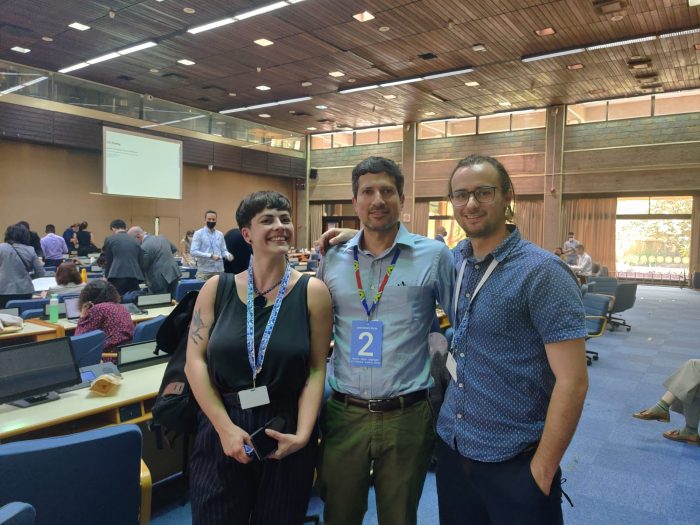 At midnight on Friday, it was clear there was too much work to be done on the plastics resolution and that negotiations had to go through into the weekend.

While it was highly encouraging for the EIA team to see countries coming together to decide upon controversial issues like never before, including a dedicated financial mechanism for developing countries, a small number of countries had outstanding issues to discuss.

Likewise, the scope of the mandate was called into question, including whether the text should mention the need to address, for example, product design and hazardous chemicals (a long-standing ask of EIA) and if the ‘full lifecycle’ of plastics (which includes its production) should be addressed.

However, in the early hours of this morning (28 February), a tentative deal was reached. It went down to the wire and when the final text was agreed, there was an eruption of celebration from all present in the room and online; we’re unable to share that text at this stage is it’s subject to further discussion and may be altered.

It is a strong resolution and will give powers to the negotiating committee to address the full lifecycle of plastics, and the pollution it causes, in all environments. The EIA team was absolutely thrilled – this day will go down in history as the moment the world put aside differences to tackle the scourge of plastic pollution on a global scale.

As we move into UNEA-5, the EIA team is extremely optimistic the agreement will be adopted this week – all eyes are truly on Nairobi. 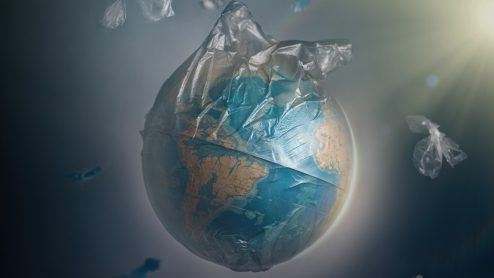 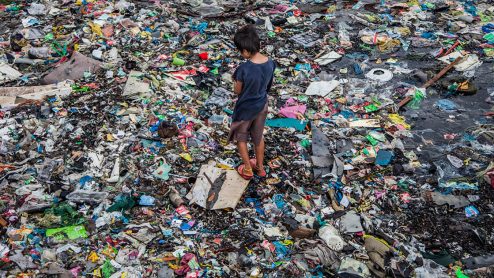