Today is the International Day for the Preservation of the Ozone Layer, not the most showy or emotive global observance but arguably one of the most important as it commemorates the 1987 signing of the Montreal Protocol on Substances that Deplete the Ozone Layer. 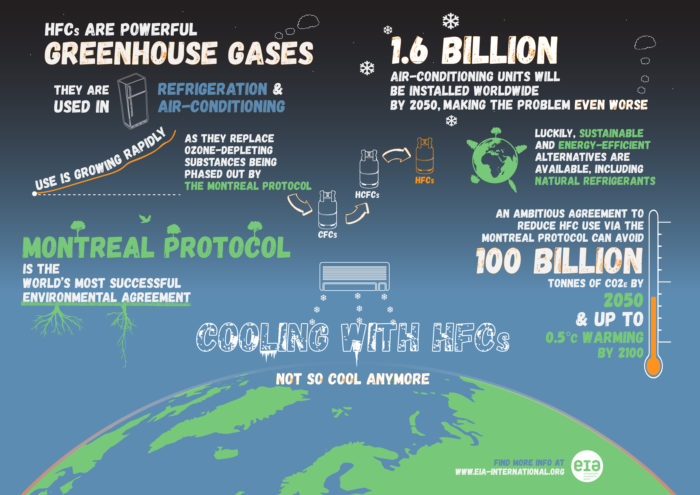 .The Montreal Protocol is widely considered to be the most successful environmental agreement to date, having phased out more than 98 per cent of ozone-depleting substances (ODS) and putting the ozone layer firmly on the path to recovery by 2050.

The ozone layer is resides in the Earth’s stratosphere and absorbs most of the Sun’s ultraviolet radiation. The consequences of inaction, of failing to rein-in the damage being done to this protective shield by human activity, would have been devastating to all life on the planet.

More than just an ozone treaty, the Montreal Protocol has also been instrumental in the fight against climate change, as ODS are also powerful greenhouse gases.

But its biggest challenge yet lies ahead.

Since 1998, EIA has been in the vanguard of organisations urging Parties to the Montreal Protocol to address the use of HFCs and that vision is poised to become a reality with an amendment to phase-down HFCs expected to be agreed at a meeting next month in Kigali.

An ambitious HFC agreement has the potential to avoid 100 billion CO2-equivalent emissions by 2050 and 0.5°C warming by 2100, significantly contributing towards the goals of the landmark Paris Agreement last year and eliminating the use of some of the most potent greenhouse gases in existence.