Today (November 1) is the official start of the Dall’s porpoise hunt in Japan. This large-scale hand harpoon hunt – for more than a quarter of a century it was the world’s largest direct cetacean hunt – came to an abrupt end after the devastating earthquake and tsunami that hit north-eastern Japan in March 2011.

With many of the boats gone and the key Dall’s porpoise landing ports of Otsuchi and Kamaishi totally destroyed, many hoped that this signalled the end of the hunt.

However, it was not to be – in mid-March this year, some small scale hunting took place north of Otsuchi and Kamaishi, so we are now eager to see if the hunt will resume after the closed summer season. 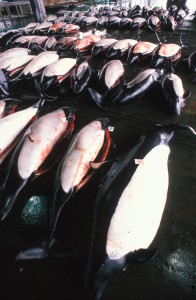 Even prior to the tsunami, catch statistics indicated that the hunt was in serious decline. While over 18,000 porpoises were officially killed just two years before I first visited Otsuchi in 1999, catch numbers have decreased year on year ever since. The 2010 catch was just under 5,000 porpoises, the smallest since records began in 1963.

Why was this happening? Well, it could be a combination of a number of factors: reducing prices for porpoise meat, greater awareness of risks to consumers through the consumption of mercury-laden porpoise meat, new regulations in Japan that went some way to preventing porpoise meat being sold as whale, efforts by EIA and other NGOs to persuade large Japanese retail chains to stop selling cetacean products – these have all probably played a role.

But it could be simply that there are fewer porpoises to catch and this is what chiefly concerns me. The conservation status of whales and dolphins hunted in Japan’s coastal waters rarely gets first billing in the public debate about the hunts, but it is a serious issue. A report soon to be published by EIA demonstrates that there is little, if any, evidence to show that any of the coastal hunts are sustainable, and more than a few worrying indications that they aren’t.

Nine species are targeted in the various hunts, including the infamous drive hunt depicted in the film The Cove. Data collated reveals that long-running declines in catches of species such as the striped dolphin and Dall’s porpoise now extend across multiple prefectures, a pattern now being replicated in other species including the short-finned pilot whale and spotted dolphin. 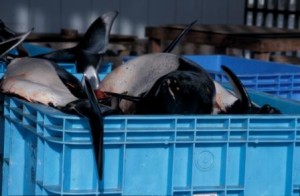 Frankly, it seems likely that the Dall’s porpoise hunt will resume today. Hopefully, it will be at a much reduced level and we further hope that our report will bring some impetus to re-examine all the hunts from a conservation perspective.

While the Japanese government maintains its stubborn reluctance to relinquish an archaic and dying industry for which there is declining demand, the very least it can do is establish a scientific management programme that will ensure the restoration and maintenance of these species at their former levels.