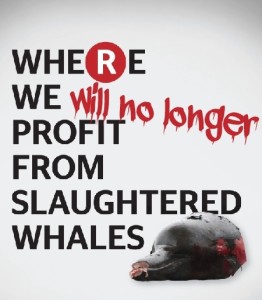 Rakuten, Japan’s largest e-commerce marketplace with an increasing international reach, announced an end to whale and dolphin meat sales via Rakuten Ichiba in April after the launch of our report and a social media campaign with Humane Society International, in which supporters were urged to target both the company and CEO Hiroshi Mikitani.

As well as Rakuten Ichiba, the company owns Rakuten Shopping (formerly Buy.com) in the US, Play.com in the UK, PriceMinister in France, shopping sites in Germany, Austria, Brazil and other countries, Canadian e-book reader Kobo and popular chat app Viber, as well as being a major shareholder in Pinterest.

Rakuten announced its ban after the March 31, 2014 ruling by the International Court of Justice that Japan’s fraudulent scientific whaling in the Antarctic did not comply with the terms of the International Convention for the Regulation of Whaling (ICRW) that govern such whaling.

Now a story published today in leading Japanese newspaper Asahi Shimbun reports that Japanese businesses handling whale meat have been forced to shut down or change their strategies:

“It’s as if we’re handling something sinister,” said an official in charge of mail order at Hino Shoten Co., a Nagasaki-based company that has been dealing in whale meat since 1908.

Like many other companies, Hino Shoten has been hurt by the decision of Rakuten Inc., operator of Japan’s largest online shopping mall, to cease sales of whale meat.

“The effects of prohibiting sales of whale meat on Rakuten are enormous,” the official said, noting that Hino Shoten had been posting annual sales of tens of millions of yen through Rakuten’s retail service.

Rakuten, in fact, started to come under fire internationally on March 18, two weeks before the ICJ’s ruling.

On that day, the Environmental Investigation Agency, a nongovernmental organization based in the United States and Britain, released a report that described Rakuten as the world’s biggest online retailer of whale meat.

The report accused the company of handling meat of endangered whale species and dolphins caught through drive hunting, the method used in Taiji, Wakayama Prefecture. Taiji became the target of anti-whaling and conservation groups after the town’s dolphin hunt was shown in the award-winning documentary “The Cove.”

EIA Senior Campaigner Clare Perry said today: “It’s fantastic to see that Japanese companies are finally waking up to the fact that whales do not ‘belong’ to one country to be exploited at will, that they are part of our global commons and there is overwhelming desire from the global community to protect them.

“EIA extends its respect and gratitude to the thousands of supporters who took action to support our cetacean campaigns via Facebook, Twitter and email, and so played a vital role in spurring these giant corporations to do the responsible thing and consign their whale sales to the history books.”