Details are emerging from local media in China of an unprecedented enforcement operation in the country’s Yunnan Province against smuggling of precious timber from neighbouring Myanmar.

The raid last month led to the seizure of over 100,000 tonnes of wood worth tens of millions of dollars and the dismantling of a major crime syndicate.

Our Forests campaigners have been documenting the illegal cross-border trade in timber from Myanmar to Yunnan since 2012. Under Myanmar law, all exports of timber must take place from the seaport of Yangon, with overland trade prohibited. The country has also banned exports of raw logs since April 2014. 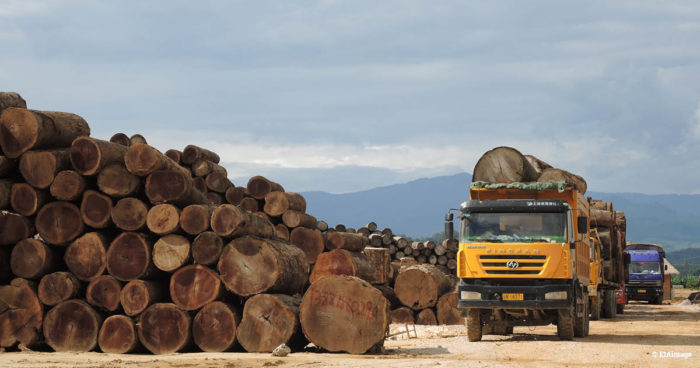 However, these controls have been routinely flouted, with significant quantities of valuable teak and rosewood logged from Myanmar’s dwindling forests flowing across the border aided by criminality and corruption. For example, in 2013 China Customs data recorded the import of 938,000 m3 of logs valued at half-a-billion dollars, with 94 per cent entering China overland.

Sporadic clampdowns have been observed on the China side of the border over the past few years, but the criminal syndicate behind the trade have largely continued operations unabated, especially in Burmese teak logs and sawn timber.

In mid-2018, EIA investigators documented continued smuggling of teak logged in Shan State, Myanmar, via border crossing points in neighbouring Kachin State. Once in Yunnan, the timber is moved to the rural town of Nongdao, which acts as a free trade zone with no import duties paid until sale and onward transport, with further storage sites and wood processing factories located in the nearby border town of Ruili.

Traders told our investigators that 95 per cent on Burmese teak imported into China enters via the overland route and is destined for buyers in the main economic hubs of southern and eastern China. 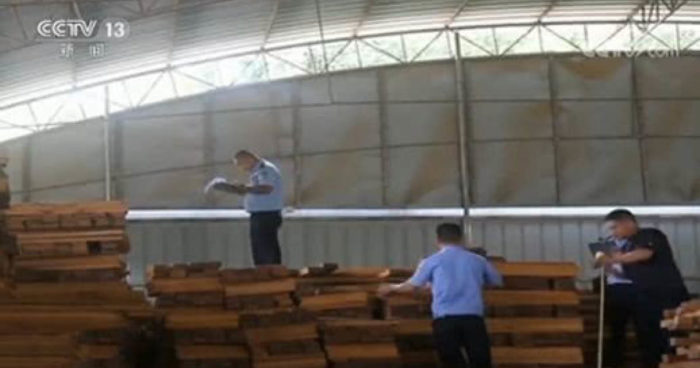 July’s raid under way in Nongdao

The operation conducted by Chinese law enforcement agencies this July is unparalleled in both its scale and intent and could finally end the illegal cross-border timber trade which has ravaged swathes of forests in Myanmar and netted huge profits for criminal groups and corrupt officials.

A joint team of 100 officers from the army and police swept into Nongdao and raided a series of warehouses where timber was being stored. Anticipating resistance from workers and villagers employed by the timber smuggling syndicates, helicopters were used for initial surveillance and power was cut to the town to disable CCTV cameras and prevent news of the raid spreading.

In total, the operation seized over 100,000 tonnes of valuable teak and rosewood timber stored at eight warehouses around Nongdao. 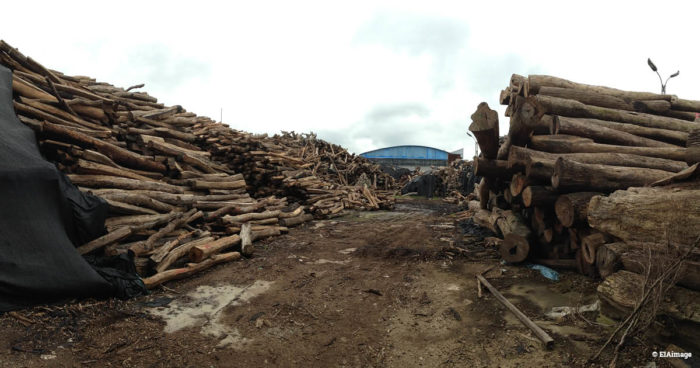 Julian Newman, our Campaigns Director, said: “When I first went to Nongdao in 2015 I could not believe how much timber was stored in plain sight around the town, showing the sheer scale of the timber-smuggling racket, and how brazen the smugglers had become.

“Returning in mid-2018, the trade had become more clandestine, with storage yards hidden behind tall fences with barbed wire and CCTV cameras everywhere, but substantial amounts of teak were still available. The recent raid on the town could be a decisive step in ending this destructive and corrupt trade.”

In parallel with the raid, Chinese authorities have also targeted key individuals who ran the largest cross-border wood smuggling syndicate, called BDYA and commonly referred to as the “dazu”  (big group). 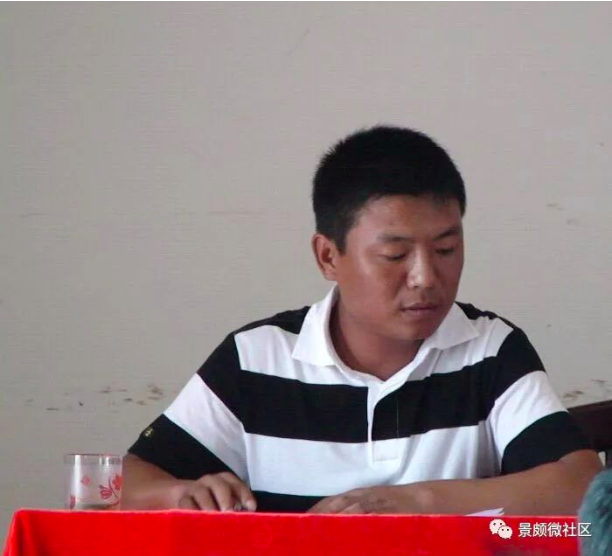 Our investigators first exposed the activities of BDYA in 2015, naming its members as Ali Jie, Lee Maw Yung, Dung Hpaung Gun and Brang Nu. The group relied on an intricate web of contacts among the Myanmar military and armed ethnic organisations in Kachin State to move truckloads of illicit timber through conflict areas and into Nongdao, charging smaller smuggling groups a fee to guarantee safe passage into Yunnan via smaller informal groups controlled by the group.

Charging up to $1,250 per tonne for precious woods, the group made a fortune from its control of the routes. Members of the group also traded and processed timber, with Lee Maw Yung owning a wood processing factory in Ruili. Other traders claimed he was the biggest operator in the local timber market, referring to him as the “dragon’s head”.

Official Chinese court documents reveal that Lee Maw Yung, Dung Hpaung Gun and Brang Nu were arrested in early July 2019 on charges of bribery and are awaiting trial. The fourth member, Ali Jie, had earlier been charged with financial crimes. 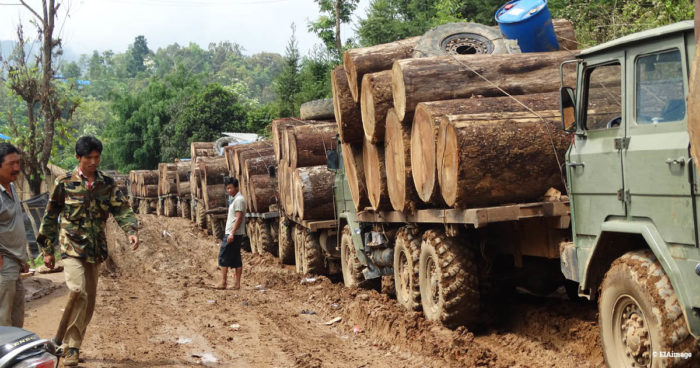 Log trucks in Kachin waiting to cross into China

A recent article in the local media reveals fascinating insights into the corruption which allowed the timber smuggling business to persist for decades, describing the case of Yang Mingjin, former soldier and political commissar of Ruili’s frontier defence brigade. Yang was arrested in April 2019 for corruption and protecting individuals involved in timber smuggling. During a five-year period, he is accused of taking bribes totalling RMB1.8 million ($250,000) and gifts of rosewood and jade from timber smuggling syndicates. Two of the people who paid him off were members of BDYA.

Faith Doherty, our Forests Campaigns Leader, said: “These actions taken by Chinese authorities in Yunnan against the smuggling of illegal timber across the Myanmar border shows how China does have laws in place to combat this forest crime – and the political will to enforce within its territory when it wants to.

“EIA is calling for the Chinese authorities to continue using current laws in place to address all illicit imports of timber and to work hand-in-hand with producer countries to combat illegal logging and the illicit trade in timber.” 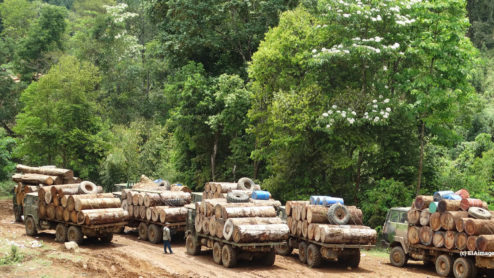 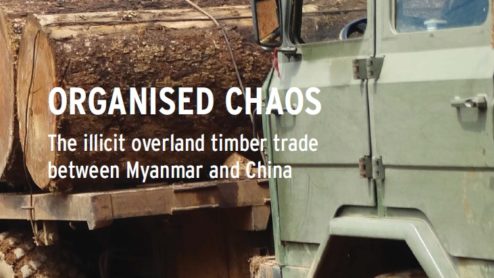