The Environmental Investigation Agency today shared a platform with senior United Nations officials in a bid to increase the use of anti-corruption laws to tackle wildlife and forest crime.

At a high-level event during the sixth session of the UN Convention Against Corruption, held this week in St Petersburg, Russia, both Yury Fedotov, Executive Director of the UN Office on Drugs and Crime (UNODC), and John Scanlon, Secretary General of the Convention on International Trade in Endangered Species (CITES), highlighted the role of corruption as a key enabler of wildlife and forest crime and urged the use of anti-corruption measures to stem the illicit trade in flora and fauna. 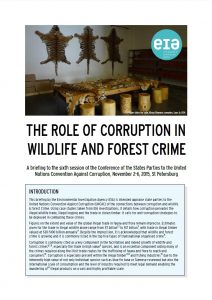 Speaking on the same panel, EIA Campaigns Director Julian Newman provided examples from EIA’s investigations in East Africa and South-East Asia to show the magnitude of corruption in the illicit wildlife trade and illegal logging.

“Corruption is an intrinsic part of these crimes,” he said. “The full array of legal instruments designed to tackle corruption and money-laundering must be deployed against the criminal syndicates pillaging our natural world for profit.”

EIA has repeatedly shown how wildlife and forest laws alone fail to reach the upper echelons of organised criminal groups, targeting instead the dispensable foot soldiers such as poachers and loggers. Yet there are encouraging signs that these offences are now being treated as serious crimes where corruption thrives.

Today’s event marked the first time that wildlife and forest crime has attracted high-level attention at an UNCAC meeting. Opening comments at the conference by UN Secretary General Ban Ki-moon mentioned wildlife trafficking as one of the main transnational crimes facilitated by corruption. He added that corruption, if left unchecked, poses a major threat to the attainment of the Sustainable Development Goals recently agreed by the global community, including goal 15 to protect terrestrial ecosystems and halt biodiversity loss.

The UNCAC now has 177 state parties and there are signs that in some regions the provisions of the Convention are beginning to be deployed against wildlife and forest crimes; for example, specialist UN anti-corruption advisors have begun working with the Kenya Wildlife Service to support its efforts to tackle elephant poaching and the initiative is planned to spread to other countries in East Africa.

Newman added: “It is heartening to see crimes against nature moving up the global political agenda. What is needed now is the increased deployment of legal mechanisms included in the anti-corruption convention, such as stolen asset recovery, protection of whistle-blowers and international cooperation to go after the criminal syndicates.”