We came, we set up, we partied in the park!

After months of preparation, we are delighted to report that EIA’s Greens on the Green free summer festival was a big success. 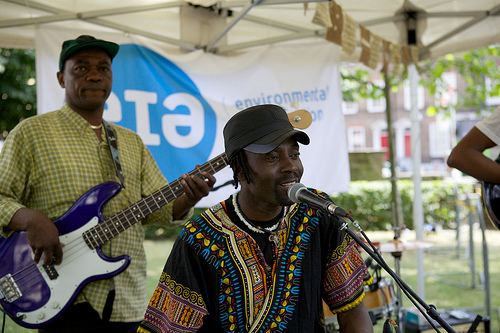 Hundreds of people dropped in to London’s Islington Green during the course of a long, hot and utterly perfect summer’s day on Saturday.

Some stayed to watch documentaries about our work in the film tent, or chatted to campaigners and investigators about the work we do … or just took it easy on the grass to a great line-up of live music.

With EIA’s work taking our undercover investigators all around the world, the event was orchestrated as a way of saying ‘hello’ to the local community in which we’re based.

So, a  huge and heartfelt thank-you to everybody who made time to join us, from long-term supporters to the many new faces from the neighbourhood who came along to find out what we’re all about.

A special word of thanks is also due to the people whose creativity, efforts and energy made it all happen; to Paul R, Paul N, Jamie, Bill and Emma of our comms team; to Janet, Amy and Ben of our fundraising team; to our endlessly dedicated volunteers Ben, Ian, Chris, Cecile, Hannah, Lynne, Ross, Sarah, Christie, Sue Ling, Jyoti, Alex and Paul R’s mum Jenny; to Steph of Grass Routes Soap, Charlotte of Chocoloty Cupcakes, Shakeyface, John & Steve of Stage Electrics, Mulberry Mongoose, Tenshi, Zosienska and face-painter Elisha; and to musicians Kasai Masai, Danni Nichols, Alastair James, Joyce the Librarian and the A&E Old Time String Band – THANKS!

If you’re interested in our work and the enormous difference it makes to the natural world, please consider supporting us with a donation.