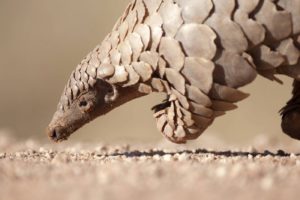 All four species of African pangolin are now at grave risk of extinction due to exploitation by wildlife traffickers.

Based in countries including Nigeria, Cameroon and Democratic Republic of Congo, transnational criminal syndicates are targeting pangolins across the region’s tropical forests and savannahs.

By hijacking governance systems and transportation networks, they are organising high-volume exports of pangolin scales to South East and East Asia, where these illicit wildlife products are sold at a vast profit.

12.7 tonnes of pangolin scales, en-route to Vietnam from Nigeria, seized by authorities in Singapore in April 2019. ©National Parks Board of Singapore

In April 2019, the authorities in Singapore confiscated a staggering combined haul of 25.6 tonnes of pangolin scales on their way from Nigeria to Vietnam – equivalent to over 40,000 pangolins.

In July 2019, a further 11.9 tonnes of pangolin scales were seized in Singapore, followed by 9.5 tonnes impounded in Nigeria in February 2020.

As these seizures account for a small fraction of the overall trade, we can only begin to imagine how many dead pangolins are illicitly shipped from Africa to Asia. 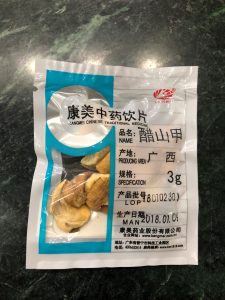 This deadly trade is driven by the voracious demand for pangolin scales in traditional Chinese medicine.

Some traditional Chinese medicine practitioners are speaking out against the use of globally threatened wildlife, and more sustainable plant-based alternatives are available.

But while criminals and large pharma companies can make money, the trade continues.

Our campaign to save pangolins

Thanks to the generous support of people like you, in 2018 we were able to launch our new Pangolin campaign. Recently, this has enabled us to: 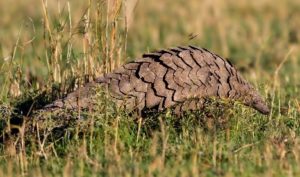 Undercover investigations have been a unique hallmark of EIA’s work for more than three decades.

Our investigators meet criminals involved in the illegal wildlife trade, from low-level fixers to senior bosses. They covertly acquire information that helps us to infiltrate criminal syndicates and discover the people, finances and methods behind the illicit trade.

Between June 2019 and August 2020, EIA undercover investigators have engaged with 23 separate pangolin traffickers in West, Central and East Africa. Between them, these traffickers claimed to have a total of 116 tonnes of pangolin scales for sale - equivalent to many tens of thousands of pangolins. 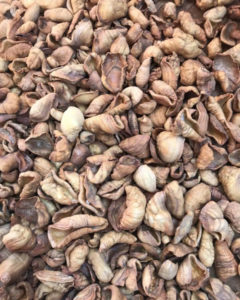 Pangolin scales prepared for use in traditional Chinese medicine

Every pangolin killed for profit leaves a trail of blood money, from the poacher to the criminal kingpins who control operations at a distance, often in China. Yet it is rare for the authorities to use anti-money laundering laws to prosecute wildlife traffickers. We are following the blood money trail to help law enforcement agencies to:

Tracking the traffickers in Uganda 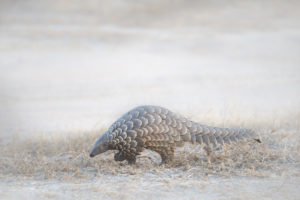 Uganda has become a major transit centre for pangolin trafficking due to its location between important pangolin habitats and East African ports that are notorious transport hubs for wildlife trafficking.

Uganda has strong wildlife laws and a good success rate for prosecutions of low- to mid-level wildlife traffickers. Now we’re gathering evidence to go after the big players.

With our partners in Uganda, we brought together officials from a number of Ugandan government agencies including the wildlife service, police, customs and financial intelligence agency and they have formed a new multi-agency investigations team.

This team will investigate the financial crimes of mid- to high-level wildlife traffickers who have so far evaded detection, unmasking the people behind this cruel trade and putting them behind bars.

How you can help save pangolins

We’re making progress, but we urgently need your support. Your donation will help us to: