It’s been a busy and exhilarating week for EIA’s cetaceans team since last Friday when we rolled out the second phase of our ongoing campaign to persuade Yahoo! to stop profiting from the sale of whale and dolphin meat via Yahoo! Japan.

We asked supporters to visit our Action Alerts page and use email, Facebook and Twitter to put pressure on the company and its recently appointed CEO Marissa Mayer to do the right thing.

Our rallying call met with astonishing success as thousands of people and organisations around the world answered the call and got directly involved. In less than a week, our news alerts and updates on Facebook had received scores of comments and hundreds of shares, and our Tweets on the issue were reTweeted to hundreds of thousands of people around the world, demonstrating the immediacy and vitality of social media as a key form of campaigning.

In the midst of the fresh wave of action against the internet giant profiting from the slaughter of endangered species, Yahoo! itself blundered badly on Saturday when it hypocritically posted a cute item on its official Facebook page about a rare white humpback whale spotted off Norway and invited its 10 million+ followers to suggest names for it – giving protestors an ideal forum in which to vent their outrage.

And protest you did – the post was effectively swamped with hundreds of angry messages, with many individuals warning that they were closing down their Yahoo! accounts and emails.

EIA first launched its Yahoo! campaign in June this year, directing protests against the company and at then-CEO Ross Levinsohn, urging senior management to take meaningful action against the Japanese subsidiary in which it has a massive stake.

The company’s only response at that time was to issue a statement to the media to the effect that it did not allow the sale of dolphin, whale and elephant products in the countries in which it operates, including the United States and Europe.

“As Yahoo! is only a minority shareholder in Yahoo! Japan, however, we cannot unilaterally impose corporate policies on Yahoo! Japan. Any questions about Yahoo! Japan’s business should be directed to them,” it stated.

True, Yahoo! is only a minority shareholder in Yahoo! Japan – but with a 34.74 per cent stake, it is second only to top shareholder Softbank Corp, which has a 35.44 per cent holding.

This kind of corporate buck-passing is just not good enough. 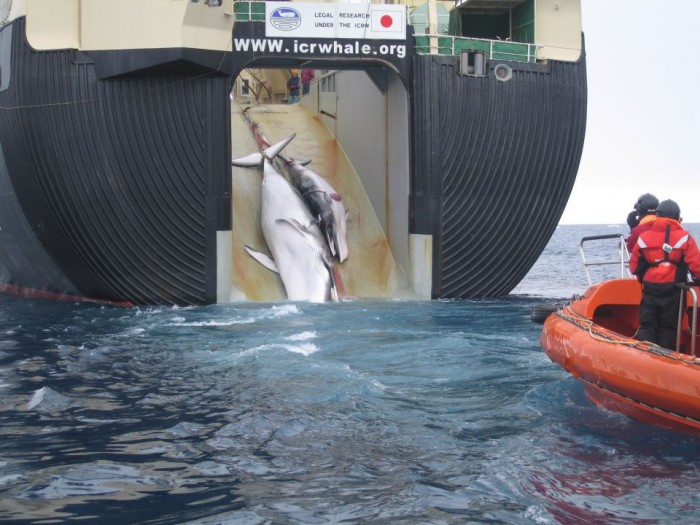 A whale and calf being loaded aboard a factory ship, the Nisshin Maru (c) Customs and Border Protection Service, Commonwealth of Australia

As the second biggest shareholder in the Japanese firm, Yahoo! is more than capable of formally proposing a change in policy to ban all cetacean products; its refusal to do so can only be interpreted as a serious failure of will and, perhaps, a desire to avoid a potentially embarrassing spat in front of other shareholders.

So that’s it, then? Yahoo! feels that, despite the serious financial clout it wields, doing nothing meaningful to change the policy of Yahoo! Japan is good enough and it’s happy to continue banking what profits accrue to it from the sales of whale and dolphin meat?

Compare and contrast Yahoo!’s bid to duck the issue and stonewall critics with that of Amazon – when EIA exposed Amazon’s sales of cetacean products via its wholly owned subsidiary Amazon Japan in February, the company took down all such products within 24 hours and subsequently banned them for keeps. Since then it has demonstrated its commitment and vigilance to the new policy by promptly removing any cetacean products that slip through the net.

In fairness to Yahoo!, such a direct action is not available to it – but choosing to do nothing is irresponsible and unacceptable.

Does it honestly imagine people will stop caring, or that its indirect support of Japan’s crumbling yet lethal whaling industry won’t seriously harm its public image?

Does it really think its ongoing silence will be met with anything other than loud anger so long as it keeps lining its pockets with blood money?