If you watched the BBC Panorama documentary Ivory Wars:  Out of Africa last night (April 12), you will probably have had one of two kinds of reaction.  One might have been shock, enlightenment, disbelief or revulsion at this ‘new’ development. Or perhaps, like me, it was one of frustration and impotence. 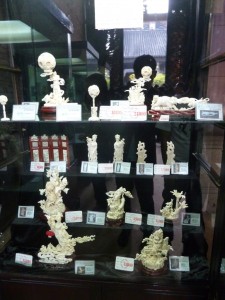 Ivory on sale in Hong Kong

The programme documents the illegal trade in ivory from its source countries in Africa to the biggest end-user China.  This is not new information.  It has been documented repeatedly, by EIA and others.  It has also been repeatedly ignored since, despite all efforts to prevent opening the stable door that is the Chinese market, the decision-makers, in their wisdom (or lack of it), and supported by some influential and highly regarded NGOs and ‘experts’, sanctioned a ‘legal’ sale of ivory to China in 2008. The rest is history – repeating itself.

EIA advised the BBC team during the formative stages of the production, providing background, contacts and on-site leads.  The resulting programme paints a stark picture of the realities on the ground – as well as some of the players involved and the driving forces behind the burgeoning illicit trade. There was a lot of hand-wringing and conjecture about the conflict and poaching out in the African bush and the illegal and unregulated domestic ivory markets of Lusaka and Kinshasa markets.  And there was comprehensive illustration of the biggest ‘legal’ regulated market – out of control.

EIA has always maintained that a legal market in China would merely serve as a cover for a much bigger illegal market. EIA has also provided evidence to that contention, actively monitoring and documenting the illegal market and the emerging economic power’s growing appetite for ivory.  To us, the risk was obvious. Even impassioned pleas from the majority of African Elephant Range States were ignored and governments, including our own, denied the problem and threw open the stable door to flood the illegal markets of China with ‘legal’ ivory, which would somehow reduce poaching. I fail to see how. The proof, as they say, is in the pudding.

At the time of the decision to endorse China as a trading partner, the Director of WWF’s International Species programme stated: “The only way to end elephant poaching is through an effective clampdown on illegal domestic ivory markets”.  I agree, and since China denies the problem it is up to the other parties to CITES – the same governments who gave China the nod – to call it to account, to refuse any further sales of ivory to China and to call for an immediate independent review of the abject failure of the all-singing all-dancing ivory control system.